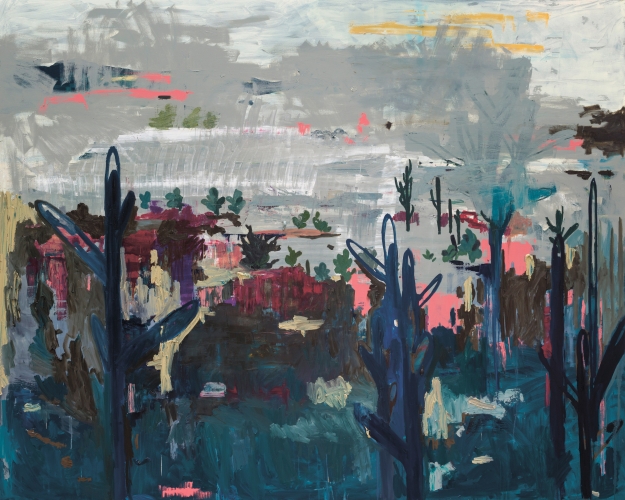 This kind of painting relies on the imagination of the viewer. Even more so, it clearly says: ‘Imagine a horizon, plants and a fence of this particular colour’. And you start seeing things, travelling in time and landing down in the landscape which most probably reflects the inner world of the viewer themselves rather than anything else in the world. Nobody knows what the viewer will see. Will the small town called after Colonel Chose Diaz be sad and full of ghosts speaking from the underground like Comala, which is the native town of Pedro Paramo from a book by Juan Rulfo? Or maybe it will be the site of action of A Hundred Years of Solitude by Gabriel García Márquez? Does this exuberant vegetation grow in the vicinity of a buoyant garden or is this the bush covering an entrance that will therefore have to be ruthlessly cut down with a sharp machete? What is blocking the distance in the painting? Is this a cloud or a hill that blocks the rest of the world and those who left for it? Is this specific spot in the painting the final destination or only a starting point? A painting gives a mere contour of the world and the content will have to be filled in from within. Basically, a painting is a vessel and the viewer is the matter that is poured into it.

The painting is rather large –200 x 250 cm. It is even possible to forget its margins when looking at it from close up. You may relocate yourself there and then on your return be surprised by an entirely different world lying there at your feet. A Brazilian artist, Marina Rheingantz (born in 1983) paints mainly landscapes and cityscapes –all that can be defined as a general view. And it would not be right to say that her paintings have no characters. The space itself is the character. It may be dense with objects, action or colour, but may as well be quite empty. In some mirror-like way this space overlaps with the thin screen of feelings covering your chest from shoulder to shoulder, and from solar plexus to collarbone.

Very often, just like this time, Rheingantz lifts up the horizon to the upper part of the painting. It gives the impression that we are taking a helicopter view as if we were standing on the top of a hill and looking into the distance. It might be us looking out of an airplane window at the moment when the wings are almost touching the ground and the wheels have already been unfolded. Such a distance creates the retention effect. You are so close to your goal, but still cannot be sure of what is awaiting for you. What will you find there? The unknown incites curiosity and anxiety. It is the second time that your imagination and inner demons get excited. You may find nothing there, like what happened to Pedro Paramo’s son. However, it may also be that towards the end of your life you will run into the love of your life or maybe keep calmly weeding your garden without lifting your head up and only on Sundays spare some time to think about death and who was born to whom, including for whom the bell tolls.

In some paintings the glimmer results from confetti, in others –from clouds, waves or vegetation tousled by the wind or fluttering leafage. This ambivalence might be the reason for analogy with the psyche, because all this is part of it, but it is slow to change and affected by moods and the environment. 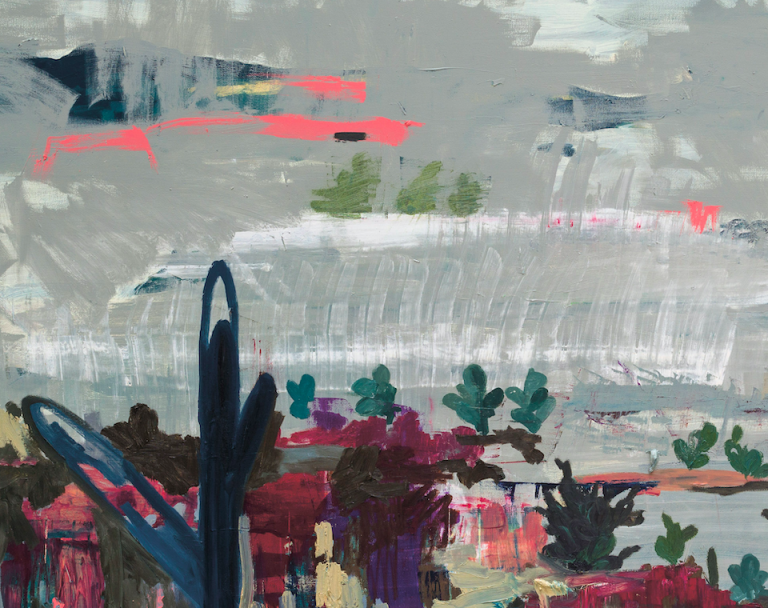 When you start thinking about the meaning of such views in personal, philosophical and historical terms, you understand that this is not merely a good example of painting that is only pleasant to admire. This could be enough to say in case of almost abstract art, but not in this particular case. Rheingantz immerses the viewer into rituals of relocation, longing and almost spiritual journeys. This is why it is not surprising at all to hear that such a young artist has already been nominated five times for PIPA, the most important prize in the field of visual arts in Brazil, (2010, 2012, 2013, 2014) and finally received it in 2015.

The artist tends to create large-scale artwork (which used to be considered the prerogative of male artists). Two-metre large paintings are difficult to reproduce, because when there is no direct contact with the painting it is impossible to recede and come closer again and thus try out several different levels. The structure of her artwork consists of a faraway plane which is stable and some commotion on the surface. This is best to experience by approaching and then distancing yourselves form the painting. In some paintings the glimmer results from confetti, in others –from clouds, waves or vegetation tousled by the wind or fluttering leafage. This ambivalence might be the reason for analogy with the psyche, because all this is part of it, but it is slow to change and affected by moods and the environment. The way we feel can also be regulated by distancing ourselves, turning our sight on something down deeper or the very surface of senses.

What surprises most is that despite similar structure, which is so characteristic of her artwork, Rheingantz does not look boring or self-reiterating. This is because she hunts for abyssal laws rather than creates a well-elaborated form. This is an extremely rare feature that is even more complex than a talent for form or colour. 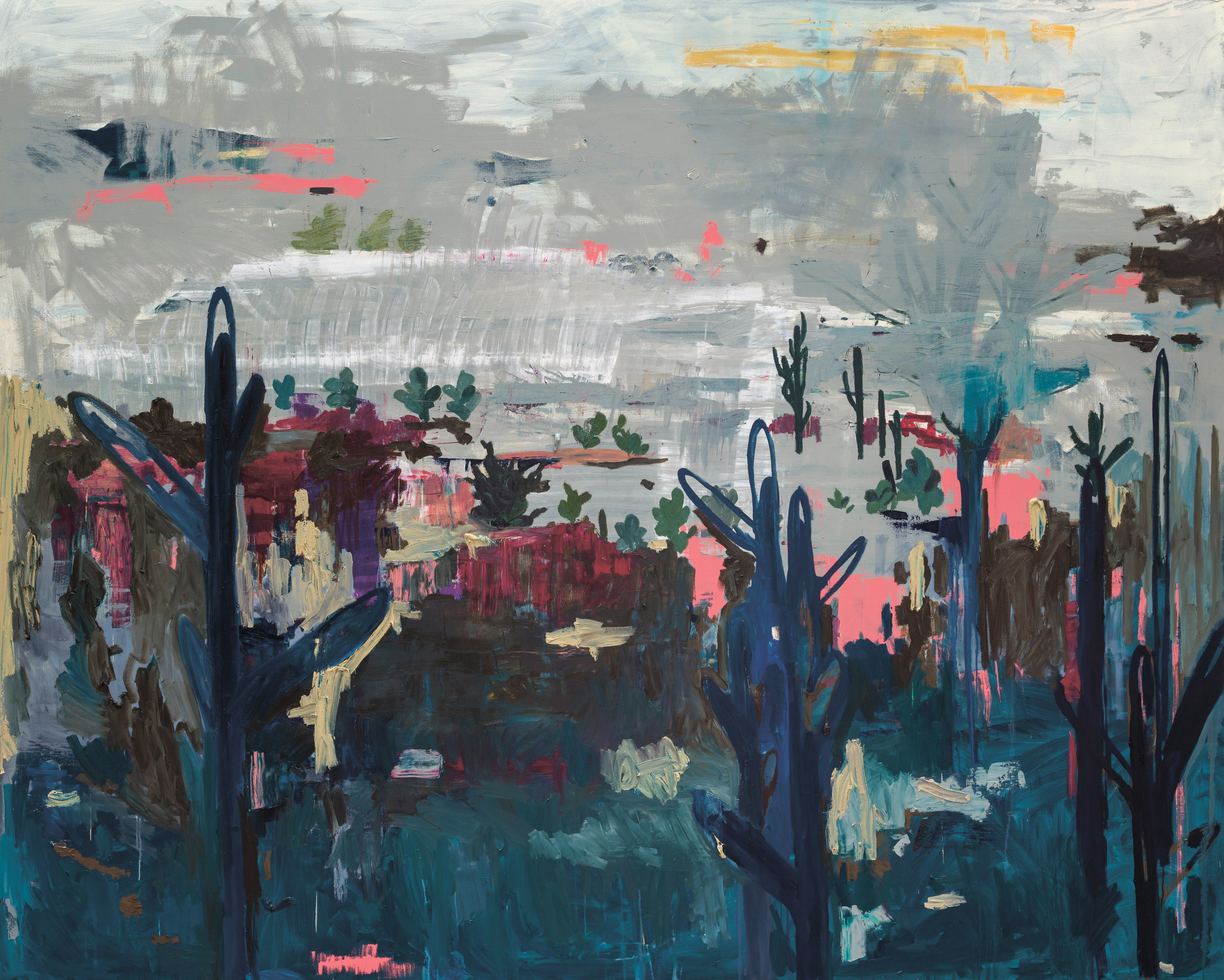