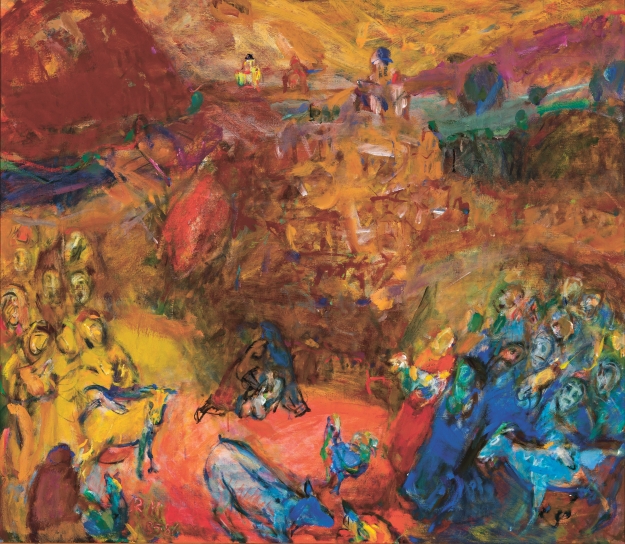 In the whirlwind of traditions

A quick look at Rima Jankauskaitė-Miknevičienė’s (b. 1942) painting Medieval Traditions in Georgia (1985–1986) first of all reveals a view from above, intense colouring and abundance of colours. ‘Colour is extremely important to me. I see it everywhere. My artwork almost never contains a black contour or an easily recognisable drawing – I use colour to create it all. Through colour I am able to say more than through a literary narrative,’ the artist said at an interview.

When painting Medieval Traditions in Georgiathe artist had to take a helicopter view of the commotion of people in the valley lying at the foot of temples. Can it be that Jankauskaitė-Miknevičienėsimply remembered a view that she once saw in Georgia and painted it in her studio? The painting portrays a scene from a folk festivity. We will never find out what kind of festivity this was, because the artist placed major emphasis on the festive emotion rather than on the festivity as such. It is characteristic of this artist to think and narrate in colours, tones and shades and to abide by the principles that she was taught by Vytautas Mackevičius, Antanas Gudaitis, Leonas Žuklys, and Vincas Dilka during her studies at the State Art Institute (currently Vilnius Academy of Arts).

Everything –people, animals, mountains and the top of the temple –seems to be swirling around. This is the Georgian atmosphere. The artist managed to capture that feeling and to impart it. 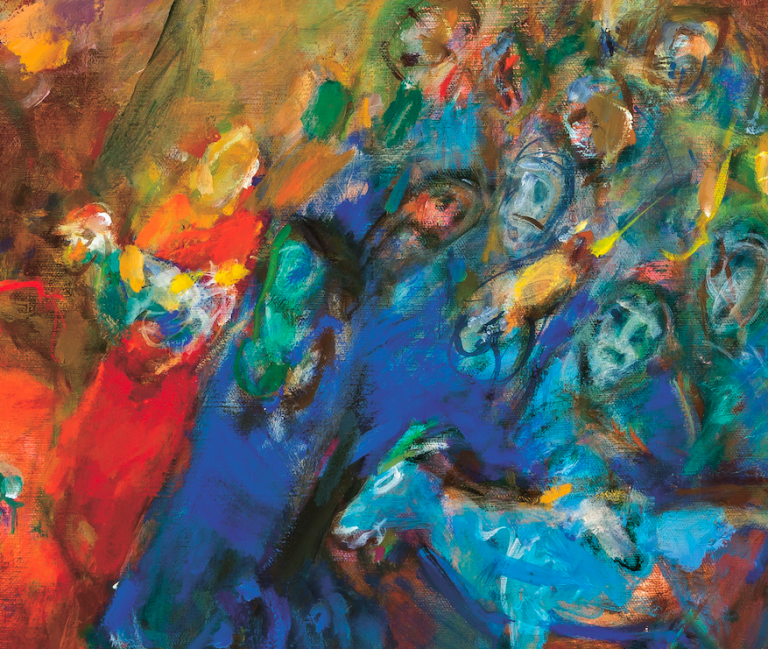 Everything that is happening in the square looks like a ritual. The crowd is split into two groups and the painter emphasised it with the help of colours. The group on the left-hand side is depicted in shades of warm yellow, and the one on the right –in cooler blue shades. Colour plays a symbolic role here. Such a clear separation of the two groups of people must mean clear differences between them and their severalty. Still, on both sides there are animals –cows, goats or sheep –mingling among people. This further strengthens the impression that the artist depicted some kind of archaic ritual connecting them all.

In the centre between the two groups of people there are two figures cuddling together. It is obvious that they are the ones performing the most important function. The composition allows anticipating that this is already the culmination of the ritual –the moment of sacrifice. Throughout the centuries, and even during Soviet times when this work was painted, sacrifice of a lamb in the vicinity of a temple has always been part of Georgian culture. Our imagination starts drawing a picture of an innocent being with meek, uncomprehending eyes and its head bowed. Irrespective of this, the mood of the painting remains festive. Everything –people, animals, mountains and the top of the temple –seems to be swirling around. This is the Georgian atmosphere. The artist managed to capture that feeling and to impart it. 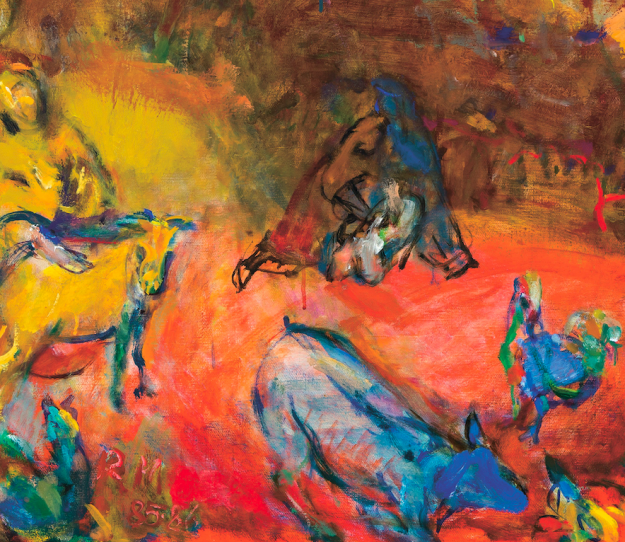 The painting makes the eyes of the viewer go round in spiral movements: from left to right and then up to the spires of the temples and down again to the centre.

The painting makes the eyes of the viewer go round in spiral movements: from left to right and then up to the spires of the temples and down again to the centre. The scheme of the composition is reminiscent of classical painting. The multitude of gesticulating figures and the animals running around, including the overall involvement of characters in the joyful swirl of action remind of Marc Chagall, whose paintings were a source of interest for Jankauskaitė-Miknevičienė and for many other artists in Soviet Lithuania, who were forced, towards the end of the 20thcentury, to create in the environment of filtered information.

After the fall of the Iron Curtain, Jankauskaitė-Miknevičienė spent ten years living and working in the United States of America. Her new experience stemmed from the six months that she spent at the Vermont Arts Centre, her solo exhibition at the Agora Gallery in New York, and creative cooperation with Ralph Lauren, Donna Karan and a number of other fashion houses in the field of knitting. It was then that she discovered yet another bouquet of personal abilities and experienced yet another interesting turn in her life. However, it was not the last turn in the artist’s life and in 2006 she returned to Lithuania.