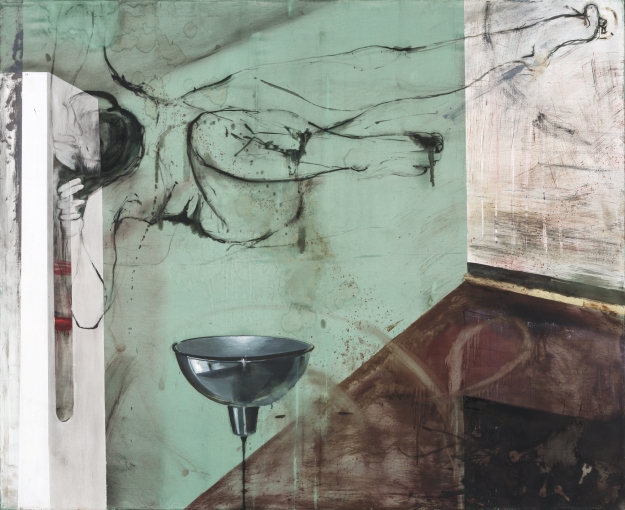 Before I read Lacan I already knew that women didn’t exist. This message was manifested by men. (Giedrė Kazlauskaitė)

Assertive is a painting by Monika Furmana (b. 1978) which begs some questions. Should the original title of the painting in Lithuanian (Teigiama) be translated into English as an adjective or as a gerund? If it is translated as an adjective, then what is so assertive about this painting: the woman, the situation, the state or ‘her’ outline? And if the title refers to a process, then what is the author asserting with the help of this work? Both assertiveness and asserting are equally important, because women (creating women, too) were defined by negations for a long time – something they were not. Man the creator was associated with the establish(men)t, culture and the original. Woman was his negative side, a shadow, a copy. Men represented reason and rationality, women were attributed to wild nature and subconscious urges. Examples of such archaic mentality are abundant even today: all we have to do is to switch on our TV and instead of a colourful world we watch fifty shades of costume-grey.

Indeed, allegation in the meaning of a solid statement indicates positivity. But what about the same word when its meaning is short of its cut-and-dry clarity? Is it always too bad a programme for a girl? What about being receptive, open-minded and relenting? Virginia Woolf once wrote that ‘Killing the Angel in the House was part of the occupation of a woman writer.’

A woman’s silhouette is hovering over empty premises. Her body posture hints at pain. Green and white colours are characteristic of hospital and so is the shining cold metal vessel. What happened? Delivery? Miscarriage? Abortion? Rape? Is this transparent body dead or agonised? The composition of the painting is compressed, the focus is funnelled to the upper part of the painting. Glances are restricted as the corridor narrows down; one cannot help but focus on the hovering transparent body.

Furmana’s girl, with her head bowed down, one leg retracted, is also hovering between the floor and the ceiling (between heaven and earth). She is squeezed between two white verticals that have no exit. 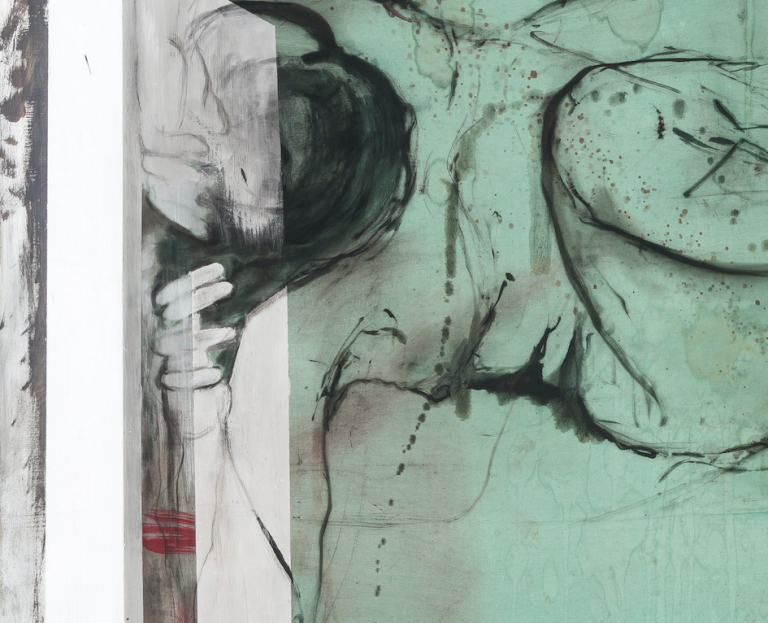 We can also read Furmana’s painting as the shape of a woman’s suffering. Medical references are collated with Christian iconography –the figure of the woman reminds of a horizontal crucifix. However, the ‘crucifixion’ on the table of the operating room or on a hospital bed is horizontal. But dramatic intensity is created not by the contrast of the static cross and the dead body but by the tightening interior, a room transforming itself into a container. We can compare Furmana’s painting to Francesca Woodman’s photo taken in Rome in 1977, where a girl is hanging in the doorway and holding onto the door frame with her hands. The girl’s posture is a remote reference to a crucifix, but the dark doorway is a gallows rather than a cross. Women are squashed by four walls and compulsory domestication.

Likewise, Furmana’s girl, with her head bowed down, one leg retracted, is also hovering between the floor and the ceiling (between heaven and earth). She is squeezed between two white verticals that have no exit. No exit in the painting, only keys scattered underneath, on the floor. These are actually not keys but their negatives, stains scorched by the sun. The fact that the prostrated leg allegedly breaks into a new space is a false signal. It does not make it to a new perspective. The foot and pelvis acquire a greyish halo which arguably attests to shaking rather than holiness. Ripples of pain stir the surface and disturb the calm arrested by straight lines. The body is still breathing. At least.

Assertive is also interesting in terms of structure and painting. Strict vertical and horizontal lines of the interior are juxtaposed with the expressive woman’s figure. She is drawn rather than painted, almost written down. The flat space of the painting and transparent silhouette of the woman enter into a contrast with the realistically depicted medical vessel. It reflects a window and a human silhouette. The only photographically realistic object is the vessel with a promise of an otherworldly light; a shining metal basin under the woman’s pelvis. The rest is expression kicking the walls of a modernist hospital ward: gore-colour floor, walls splashed with body fluids and ground with soot.

So, what is positive about the painting after all? The torment of delivery or loss serves as a source of creative inspiration. Achieving victory of the ephemeral body over disciplinary architecture. Ripping hierarchical structures and liberating some space for artistic expression. Monika Furmana blazes a trail in this restricting environment and wins some space for affirming one’s authentic being without making excuses, without embellishing it with every encounter and without struggling to always maintain a positive pre-disposition. 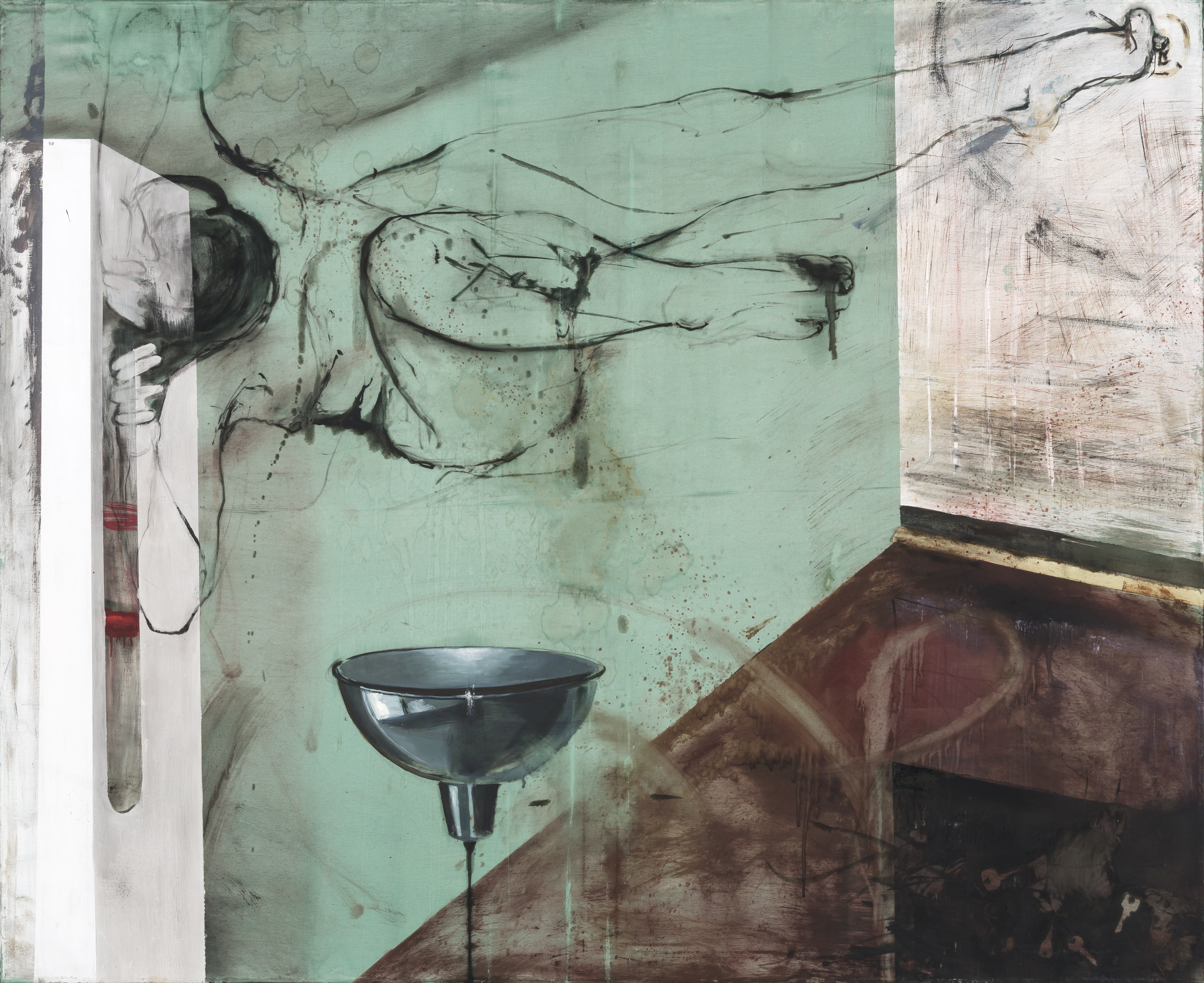