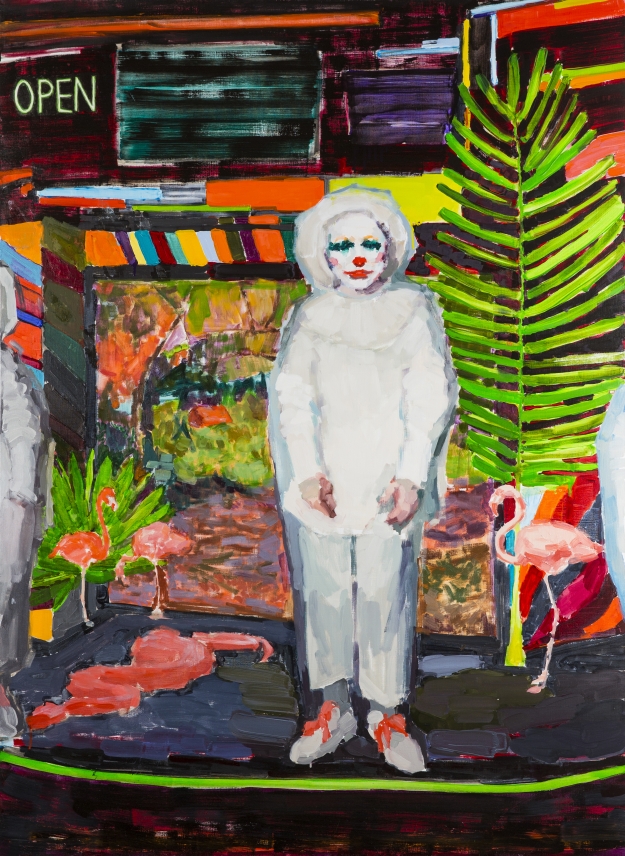 Pierrot’s character made its first appearance in Paris at the end of the 17th century as part of shows staged by travelling Italian troupes. With time the character became tremendously popular everywhere, starting with visual arts, poetry, fiction and continuing on to music, ballet, drama and cinema. The sad clown whose heart was broken by Columbine, who chose Harlequin over him, embodies naivety, a fool as an object of the viewer’s sympathies. Pierrot was assigned a variety of roles throughout the character’s existence. At the end of the 19th century Pierrot was portrayed as a disappointed, especially sensitive and lonely friend of the Moon, and at the beginning of the 20th century the character became the alter ego of the artist.

There is a lot of pathos in Pierrot’s life: he is isolated, with a white-powdered face and in white clothes, which symbolise both virginity and death. Pierrot might well be an innocent homeless, narcissist dreamer, neurasthenic or damned, or even a passionate lover, a cynical and misogynist dandy suffering for the sake of art like Christ. Moreover, Pierrot might be an androgynous being, a mad master of chaos and a tireless entertainer. Pierrot encompasses all of the above, including various possible combinations. The character knows no national boundaries, is widely spread and even became a myth due to its popularity. Modernist classics were especially fond of this character: Georges Seurat painted Pierrot with a White Pipe(1883), Paul Cézanne –Pierrot and Harlequin (1888), and Pablo Picasso –Pierrot and Columbine(1900). Still, Pierrot is alive nowadays too: David Bowie and Björk referred to this sad clown in their songs and thus wrote of him in the history of the post-modernist world.

All of the Pierrots can be linked to one painting by a young artist Auksė Miliukaitė (b. 1990), which drags behind it this enormous trail of the history of culture full of multiple meanings. The artist interprets it in a very personal way: she embodies this pathetic and utopian character herself and thus, most probably, ironically conveys her mission as an artist. Still, not all of it is so simple. What is also important is that Miliukaitė is a conceptual painter. When working on her paintings she learns from classical examples by indirectly repainting them. For example, when painting The Mad Pierrotthe artist based her work on Large Interior W11 by Lucian Freud which, in its own turn, was based on Jean-Antoine Watteau’s Satisfied Pierrot (1712). When re-creating the painting, Miliukaitė mainly focused on different variations of relations between nature and culture.

What is also important is that Miliukaitė is a conceptual painter. When working on her paintings she learns from classical examples by indirectly repainting them. 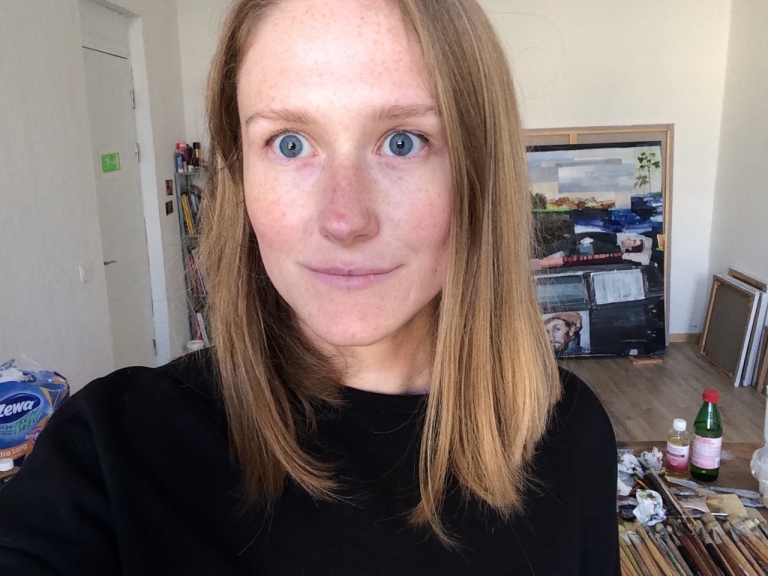 This absolutely does not mean that we will find any stylistic similarities between the three paintings. Miliukaitė rather analyses the general structure of the paintings, including their semantics, and creates a distinctive painting in terms of colours: her predecessors mainly used ochre, almost monochrome colours, whereas she uses a multitude of intensive colours. It almost seems that the artist is horrified at the sight of empty coloured spaces, therefore, she tries to fill in even the tiniest centimetre of canvas with some kind of form. Yet another difference compared to the works of Miliukaitė’s predecessors is that in her painting Pierrot is depicted on his own, even though the classics of the 18th–20thcentury painted multi-figure compositions where Pierrot was tightly surrounded by other friendly figures. Still, the artist contrapositions nature and culture in her painting: the white figure of Pierrot is surrounded by burgeoning plants, flamingos and a coiled snake depicted in synthetic tones.

Actually, Miliukaitė learns from a multitude of other authors, too. Her multicoloured and intensive paintings remind of the way Henri Matisse, Paul Gauguin, Paul Cézanne, Camille Corot, Jean-Baptiste-Siméon Chardin and other painters use colour and form and manipulate them. Miliukaitė repaints and quotes the classics by giving images some modern twist, which sometimes seems to shamelessly indulge viewers with their open colours and mixed contexts. This is how paradoxical situations and original narratives come into being. This is how the uninterruptible information flow, which is so typical nowadays, including the surplusage, which is sometimes very difficult to perceive, come into being.  The rest of the power is vested in the viewer who, by way of free associations, tries to tread in the crosswords created by the artist.

Both authorship and originality are questioned. What is institution, authority or novelty? All is mixed into one spotty spectacle in the centre of which there is the fragile, androgynous figure of the young artist disguised as Pierrot. Does the choice of the art of painting which fails to die equal madness?

Analogous combinations of birds and plants seem to confirm this. The constructions of screens in the background are painted in convincing and powerful colours and sharp strokes. In the background there is also a repainted landscape River Under the Trees, Martinique(1887) by Paul Gauguin, which also appropriates the classics and refers to the history of painting.

However, the mad character in the painting does not arouse pity: she is modest and dignified, just like the classical example of Pierrot by Watteau surrounded by friends and lush nature and dating back to the 18thcentury. Miliukaitė’s character is a modern-day naïve fool, who believes that even a modern painting based on a context from the history of art can express something authentic.  The little Pierrot shows white surrounded by the information buzz of the 21stcentury. Will you be able to hear what it is all about? As David Bowie once said: ‘I am Pierrot, I am Everyman’. 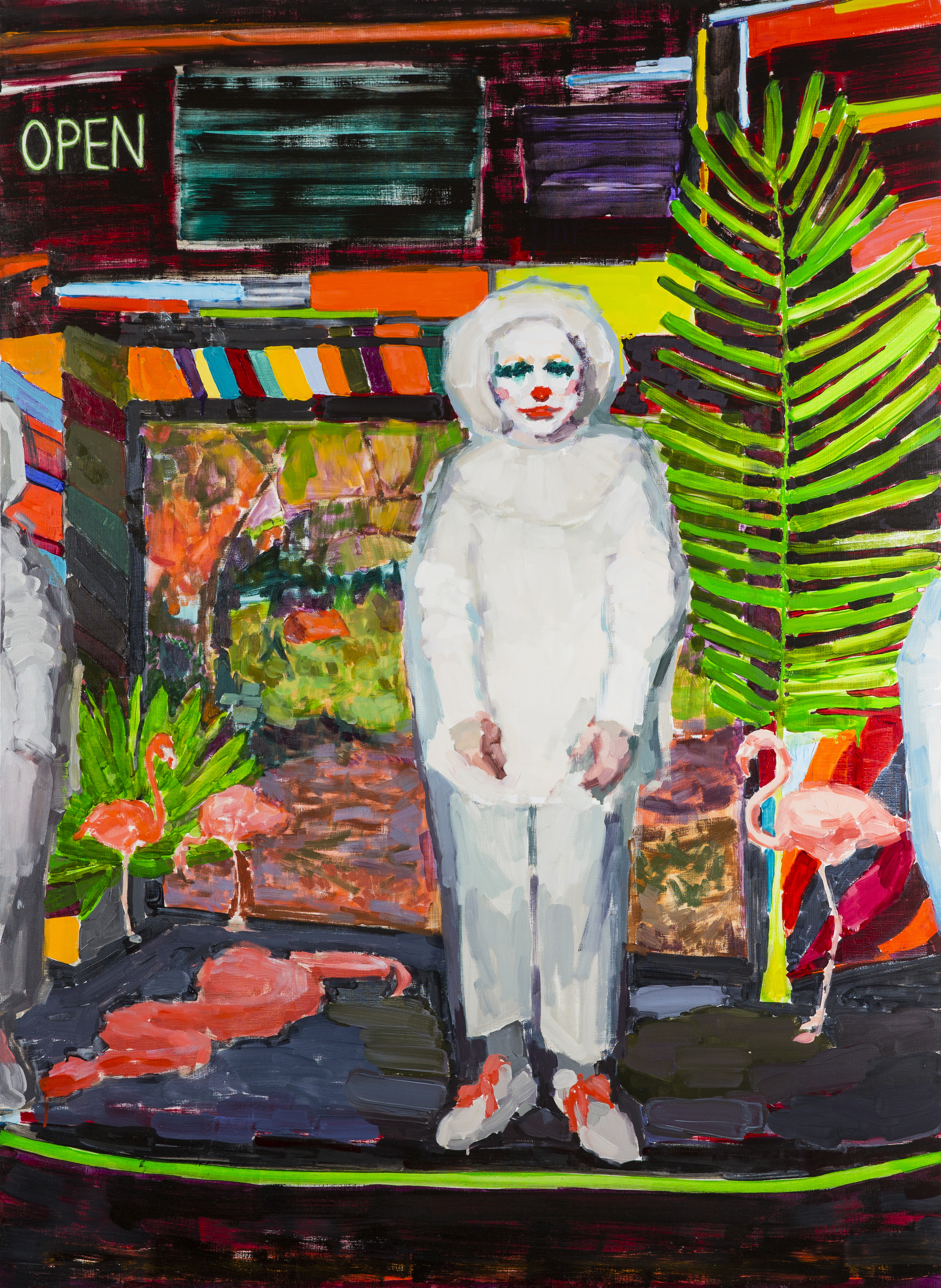