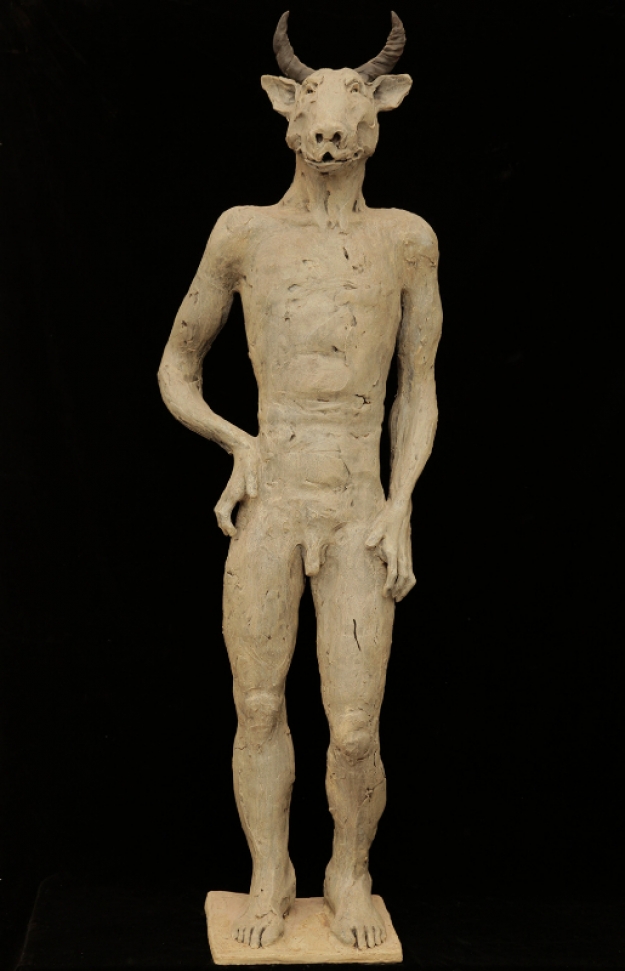 In many respects Rūta Jusionytė (b. 1978) is not a typical artist of our region. First of all, for over ten years now she has been residing and creating art in Paris, where her artwork is well-known and valued. In 2017, she received the top French award in the field of art – Diplome de l’Academie des Beaux Arts. By the way, that same year Jusionytė represented contemporary French art at the international exhibition Contemporary Expressionism in France and its Margins held at Mykolas Žilinskas Art Gallery in Kaunas. Furthermore she comes from a well-known dynasty of Lithuanian artists: Stasys Jusionis, Aldona Ličkutė-Jusionienė, Algimantas, Vidmantas and Linas Jusionis, all branches of the same family tree. The artist once said that this fact does not always help her to remain courageous and unfailing in aiming for her own goals. This is why she continuously attempts to create her own identity as an artist and does not want any preconceived attitudes about the famous Jusionis family and its talents to interfere with her professional life.

It might as well be that this physical and cultural emigration, this wide and multifaceted environment of French art determined Jusionytė’s romantic and expressive, not so much rational but rather sensuous and intuitive artistic touch. The deeper you plumb the depths of her artwork, the stronger is the presentiment that this artist is not obsessed with any complexes in terms of modernity or conceptualism and that she feels perfectly contented creating art in line with the principles of traditional and actually even classical modernist aesthetics. Still, this does not prevent her from being original and recognisable.

Jusionytė is a painter and a sculptor. In her works she persistently depicts numerous variations of the same stylised character with recurring characteristic features and bodily forms. It is a figure of a human being –that of a woman, a man or a child –or an abstract character with some animalist features reminiscent of archaic beings or elves from fairy tales or myths. They might as well be aliens, representatives of some other civilisations: their eye openings have a rather zany shape, they have pointed ears, expressive heads, slightly slack, naked and helpless bodies as if asking for protection. Jusionytė’s ceramic sculptures boast expressive modelling. Their surface is ruffled up and roughish. The modelling style characteristic of the artist suggests her being fond of impressionist plastic art and provides her characters with true vitality.

Often at the will of the artist a human figure interacts with a beastly figure within the same sculptural composition. A human being is often portrayed cosily cuddled up in the arms of a beastly figure as if feeling protected by their mystical friend or patron, or riding on a beast’s back. 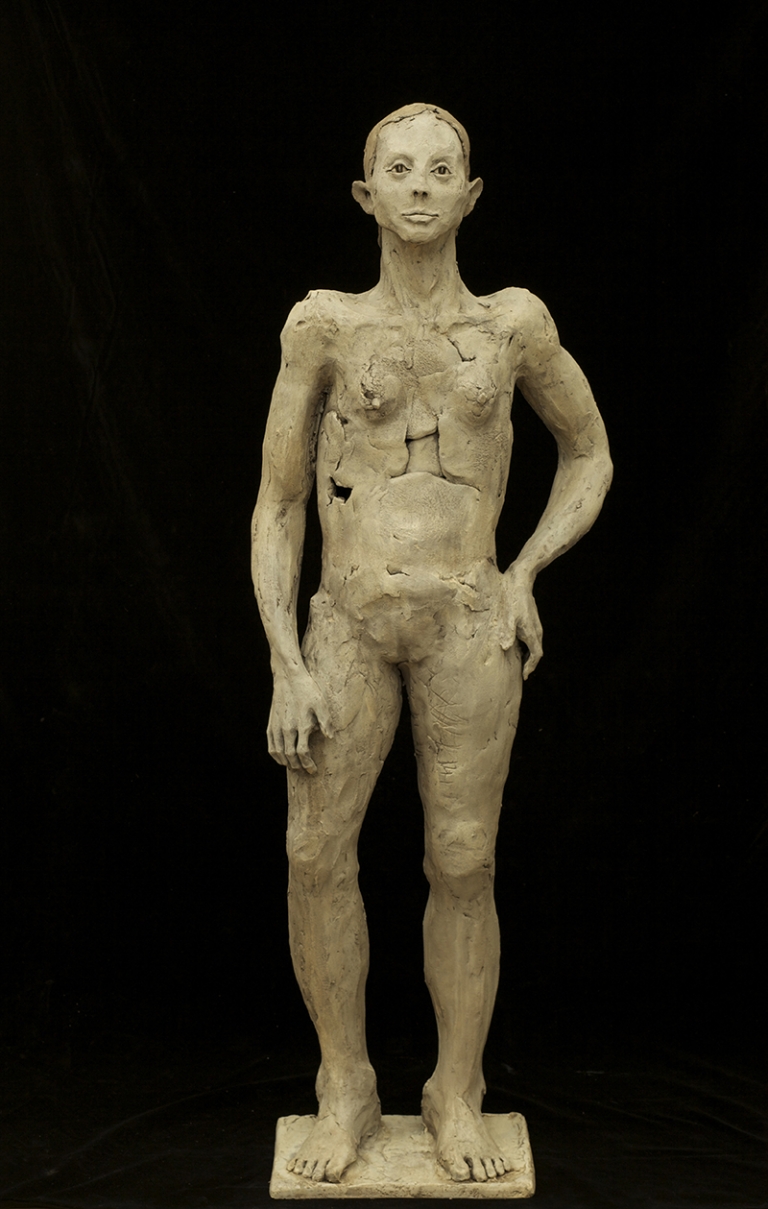 Jusionytė’s sculpture The Beast is an example of her hybrid sculptures which highlight the double nature of the main character. This human-beast –a man or a youngster with a bull head –is a clear reference to ancient mythology, too. This is the Minotaur himself –half man, half bull. According to ancient Greek myths, Minos, son of Zeus, who lived on the island of Crete, riled the God of the Sea Poseidon, who sent him a beautiful snow-white bull from the sea that Mino’s wife Pasiphae, daughter of Helios, fell in love with. The skilful Daedalus made a hollow wooden cow in which Pasiphae hid and could satisfy her passion for the object of her love. Minotaur was born out of this spontaneous love adventure. Later he was imprisoned in an underground maze from which no human could actually find his way out. According to myths, the unfortunate would get lost in the maze of elaborately interlaced corridors and dead ends, and would finally be devoured by the man-eating Minotaur.

Even though at first site it seems that the artist simply recites the classical myth, she actually presents it in an absolutely different way. By titling her sculpture The Beast Jusionytė creates a contraposition between the plot of the work and the plastic expression. The fruit of reckless bodily passion, the ruler of the cruel death maze, as portrayed by the artist, looks rather faltering, indecisive and even modest. He is far from being the Minotaur as depicted by ancient Greeks or classical sculptors, where this character is often portrayed as a muscular athlete in the heat of a fight and full of beastly force. Even when defeated he looks majestic and relentless.  Jusionytėdoes not emphasise either the gender or the brutal force of the beastly being, but rather highlights its tenderness through its meek stance. However, the main idea of the sculpture that is recurrent in many of her works is the symbiosis of a human being and an animal, harmony between civilisation and nature, and the memory of our ancestry that lies deep down in our subconsciousness. Thus, can it be that today the baffled Minotaur needs to be show a way out of the maze himself? 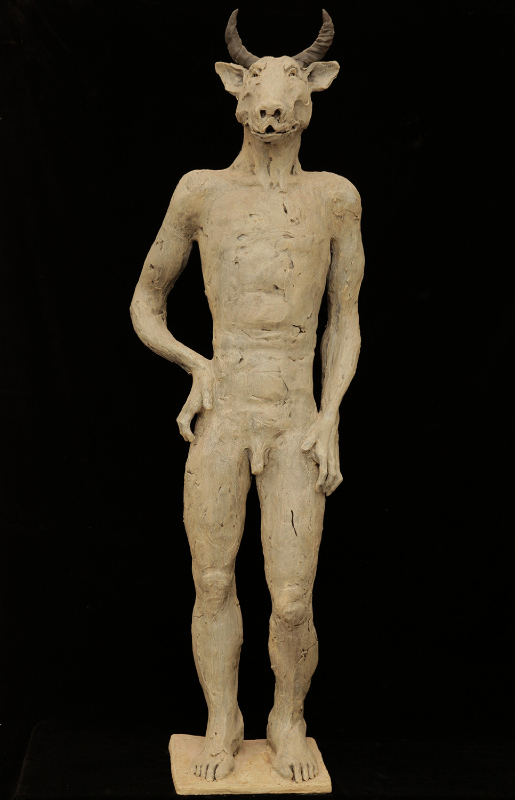