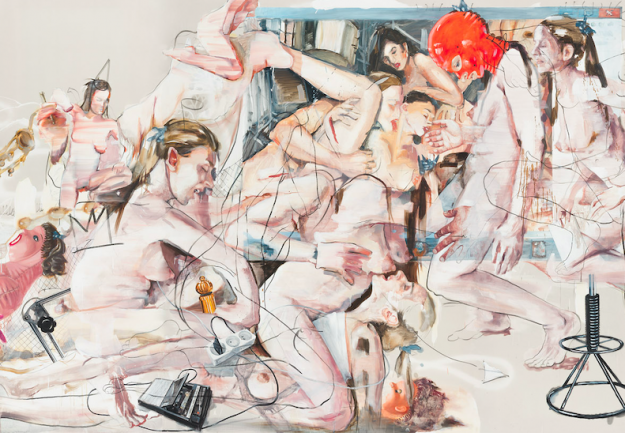 Monika Furmana (b. 1978) paints intertwined bodies fading into one another. These bodies seem to be uncomfortable, just like the unfortunate ones in The Raft of Medusa (1819) by Théodore Géricault, representative of Romanticism. Géricault’s characters look exhausted after a storm. Nonetheless, they continue hanging to the wreckage of their ship. Their beautiful muscles are lit with accentuating light. Their movements are like those of ballet dancers: dramatically expressive and form a perfect triangle for the sake of the composition. Furmana’s bodies are not that beautiful at all. Quite the contrary: they are awkward, full of imperfections, fragmented, but they too are being carried away or flung around by some invisible, but powerful force. It could be the force of a blast, or the power of hormones, which, like in a dismal dream, release the furthest hidden lust in all living beings who did not even suspect that such lust existed in them. When looking at the interlacement of mating snakes you can almost hear the sound and feel the vibrations. The energy.

Female bodies are not the only matter that is amalgamated or tightened in Furmana’s artwork. Household appliances suffer a similar fate, too. This reminds of a silly anecdote saying that bridal dresses are white because all the household appliances are white. In the artist’s works ventilators, blenders, lamps and other appliances are most often portrayed unplugged, because it is bodies that produce life and all the power stems from bodily spree. Furmana claims that she feels short of space all the time (in all senses of the word). This is also manifested through the scale of her paintings. One painting expands into another and one more, and several others. This is how, Gods and Demonsgrew into a series of seven segments.

The bodies seem to be trying hard to experience pleasure rather than actually experiencing it, and certainly not because there are no men present. 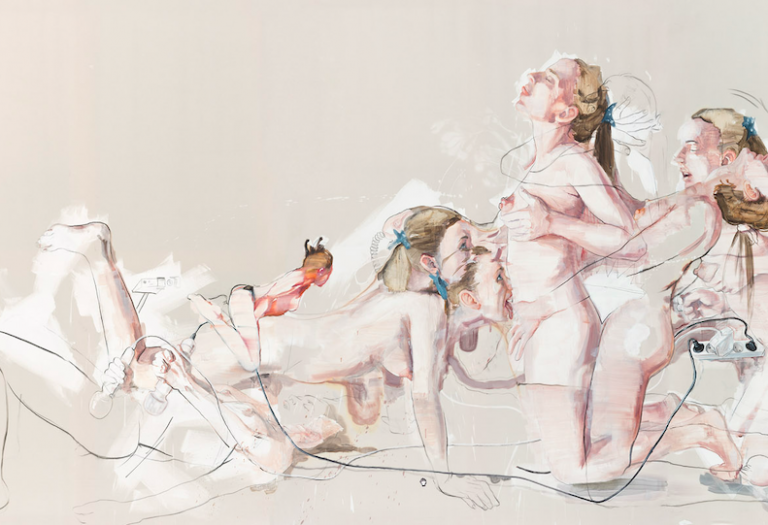 Compared to other works by the artist, her Gods and Demons seem to be almost festive. The work has been painted on atlas (used for bridesmaids’dresses) rather than a white canvas and depicts elements of entertainment: a disco ball, the fragment of a coatrack, a rubber doll for adults, and attributes of fetish entertainment. A heater and a pump evoke the feeling of mundanity. However, this does not prevent the characters in the painting from staying in an erotic trance. The bodies seem to be trying hard to experience pleasure rather than actually experiencing it, and certainly not because there are no men present. All of the women are submerged into themselves, their instincts and worries which they are trying to hide with stimulation. They might even be submerged into a rumble, which is inaudible for us and aimed at going on and on and on, rather than trying to attain anything at all, like inexhaustible machines producing something without which everything would come to a standstill. In other words, all these women are very much like priestesses from the writings of Vydūnas. They are there to serve others. It is just that the view is nothing of the kind that Vydūnas would be able to watch calmly. What a paradox! 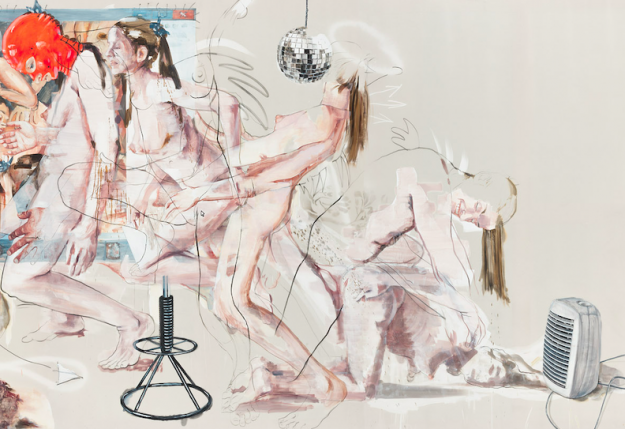 ‘Contrasts are fascinating. They overwhelm and stimulate me, just like the boundaries that are being erased. This is how I make my existence complicated at times.'

‘Contrasts are fascinating. They overwhelm and stimulate me, just like the boundaries that are being erased. This is how I make my existence complicated at times. Such an approach grew into intensive “nods of energy” where the relationship between an object and a body is important, just like the life that lies dormant in an object and the objectification of people,the author wrote in her website. It seems that the artist uses both her inner and outer self (invokes photographs) when painting. She buckets emotions and cold-blooded thoughts, takes a look from up close, almost from the inside, and from far away all at the same time.

Furmana’s works, just like the one which is being discussed here, remind of explosions that erupt at the moment when the endurance phase is over and everything starts exuding all around and often ends up ‘behind the scenes’. Sometimes her artwork portrays quite a different stage where something new, something like a universe, is being born out of chaos. Similar power is characteristic of Furmana’s technique. She does not restrict herself to spreading the paint, but also runs and fuses it and resorts to chemistry to produce ever new effects of explosion. The artist lets nature into the process of creating her artwork, she directs nature and behaves ruthlessly like nature does. Her paintings are far from depicting the idyllic and lyrical nature of Rimantas Dichavičius with beautiful and pure virgins smoothly merging into it. The woman by Furmana is not sharp-cut at all, but rather ever changing. Her hair is conglutinated with physiological fluids. She is bursting out, giving birth to others and to herself out of digested objects, duties, knowledge and examples. She is not an overflown river, but a stream wiping away giant dams and everything that lies behind them.

Even though the author says she is being extremely intuitive in her creative endeavours, it seems that she takes female stereotypes (like nature) and turns them ‘inside out’and exaggerates: hits straight in the face with a wet rag. Her paintings remind of shamanic dancing that makes you step back and think twice about how well you know yourselves.

Furmana is among the first to have a doctorate degree in art granted by the Vilnius Academy of Arts and she seems to be very seriously set to heal both art and those who wish to be healed. The artist’s relation to the bodies portrayed in her works is rather medical: without any scruples, non-eroticised, but not ignoring any physiological reactions, including sexual ones. She does not spiritualise, lyricise or idealise sex, nor does she do that to anything else in her paintings. In the eyes of the artist, gods and demons are like brothers and sisters. 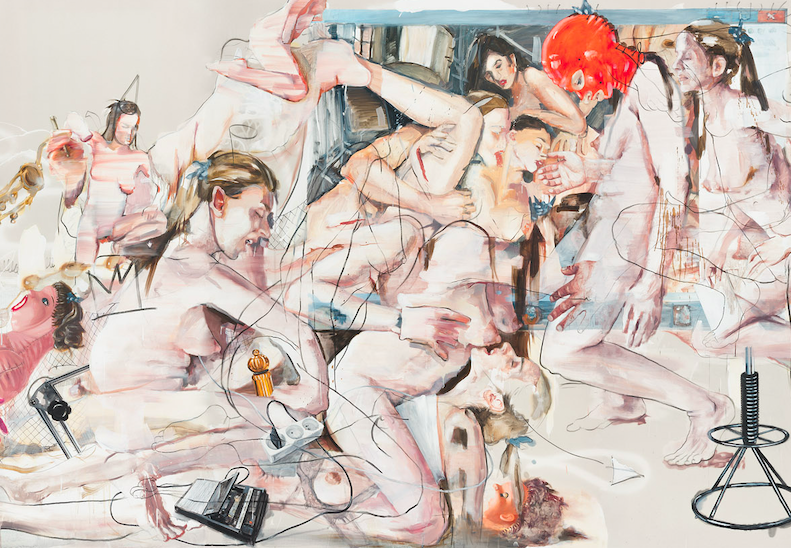