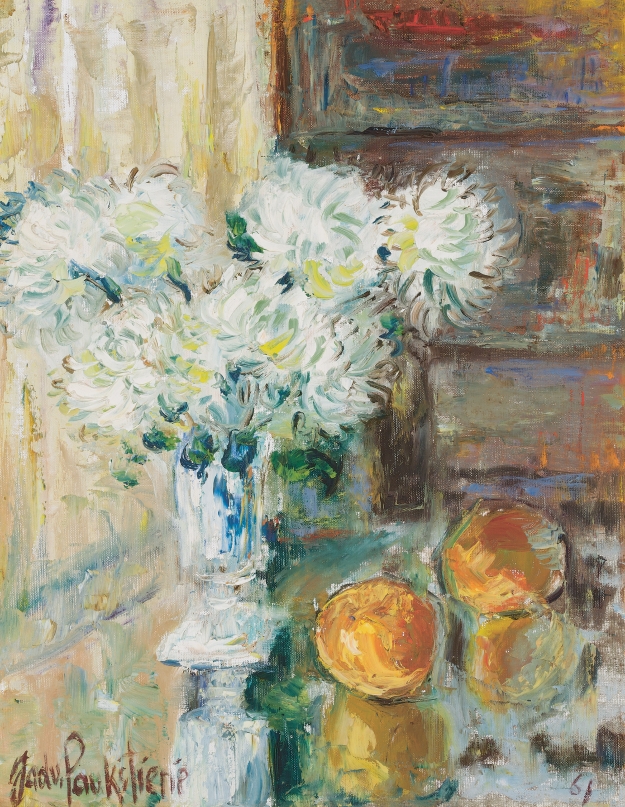 The art of colour vibrations

The still life dazzles and radiates light, spontaneous brush strokes and bright colours. In classical terms, this could be a close to perfect example of Impressionism. The artwork was aimed at capturing the moment, swift change, movement of light and conveying the volatility of reality. The author renounces contour and clear lines, including meticulously painted details, and leaves it all to free and tiny brush strokes, and atmospheric visual effects.

This is a statement that time is changeable, that everything in this world keeps changing all the time, that nothing can be defined, thus one must portray the process rather than the result. The author uses short brush strokes, mixed and unmixed, pure colours which she employs to cover surfaces, but does not do it in a sleek way, because the most important thing here is the intensive vibration of colour.

The painting is extremely positive and chamber in nature: it captures a fragment of a cosy home where surface reflections play freely all around, where sunlight penetrates through windows and sparkles on flowers and fruit. There are no oversized ambitions there, only an image of a cosy space presented as a picture of a simple, straightforward and everyday being. At the time when the world is swarmed with a variety of painting fashions and trends, here we see a calm bay where a traditional manner of painting unfolds.

The author of the work is Jadvyga Dobkevičiūtė-Paukštienė (born in 1913 in Liepaja, died in 2005 in the USA), an expatriate painter and graphic artist that the public at large in Lithuania might have never heard of. She inherited her artistic inclination from her parents. ‘My father Stasys Dobkevičius had a woodworking shop, where he made furniture for all the newly established offices in Kaunas. (...) In addition to that he also made furniture for private households. At that time everybody liked wood carvings on their furniture and my father would work on them personally with his own hands. (...) He had a number of artistic inclinations and was especially good at drawing and painting household animals, which we always had quite a number of. He liked collecting old books and Russian realistic paintings. (...) All this left an indelible impression on me and later told on my artistic maturation,’said the artist.

During her studies at ‘Aušros’gymnasium for girls in Kaunas, Dobkevičiūtė-Paukštienė felt embraced with an atmosphere which promoted the development of her artistic inclinations:‘Our teacher of drawing, Irena Jackevičaitė-Petraitienė, was a good artist. She had graduated from her studies in Italy. When teaching at the gymnasium, she instilled in her students the key essentials of using art tools, composition and working with watercolours really well.'

Later she studied for a short while in Paris, where she took classes with Professor D’Espagnat at the National School of Art. ‘The studies were very useful, and my style became more daring and free,’said the artist. 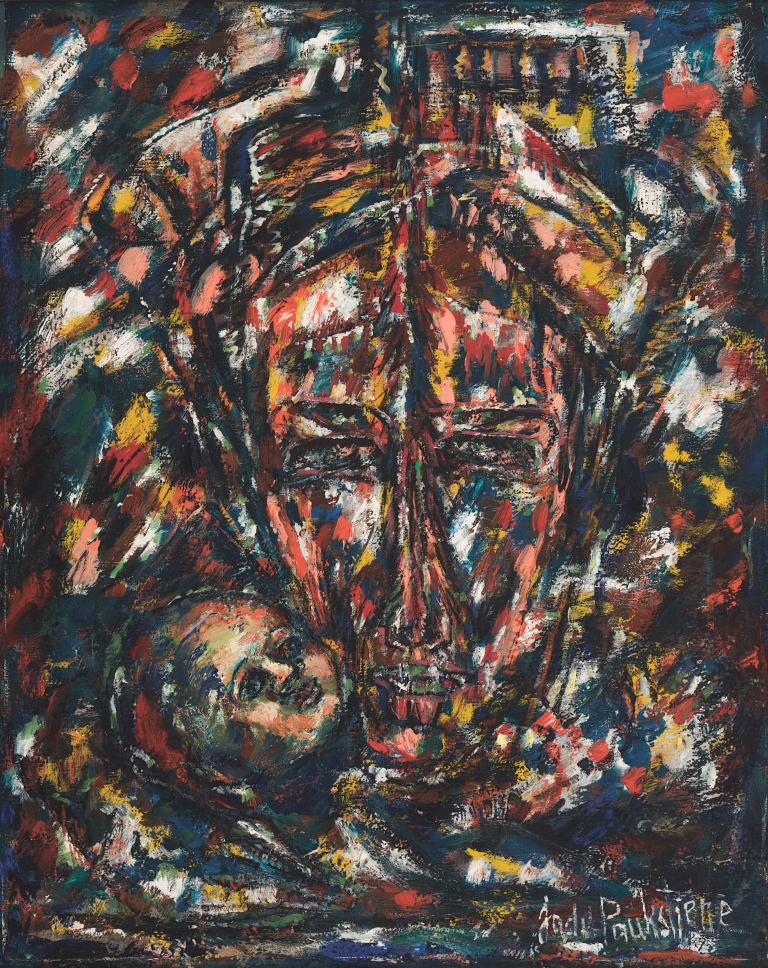 Upon graduation from the gymnasium, the future artist continued with her studies at Kaunas Art School where students were taught by such famous artists as Adomas Galdikas, Justinas Vienožinskis, Jonas Janulis, Adomas Varnas, Petras Kalpokas, Vladas Didžiokas, Juozas Mikėnas, and Vytautas Kazimieras Jonynas. In 1938, Dobkevičiūtė-Paukštienė graduated from Kaunas Art School and the art studio of Petras Kalpokas. Later she studied for a short while in Paris, where she took classes with Professor D’Espagnat at the National School of Art. ‘The studies were very useful, and my style became more daring and free,’said the artist.

Dobkevičiūtė-Paukštienė was already recognised as an artist during the interwar period (in 1937 she was awarded the gold medal for her design of the carpet for the Lithuanian pavilion at the World Art and Technology Exhibition in Paris). In 1944, she left for Germany. When the war ended, the artist taught drawing at the gymnasium which was established in the Lithuanian camp in Bieberach and took part in a number of exhibitions of expatriate artists.

In 1949, Dobkevičiūtė-Paukštienė moved to the USA, where she taught folk art at the Lithuanian school of further education in Chicago and wrote articles on art for the publications Draugas [Friend] and Moteris [Woman]. She was member of the Chicago Lithuanian Artists’Union. In 2001, Dobkevičiūtė-Paukštienė was awarded a prize established by the Council of Culture of the Lithuanian Community in the USA. She held over 15 solo exhibitions all over the USA: Chicago, Boston, Philadelphia, Hartford, Los Angeles, and elsewhere.

Dobkevičiūtė-Paukštienė’s still life presented here stands out among her other works for its light colour, harmonious composition and life-giving mood. Her other works sometimes reflect naïve sentimentality and nationality. Her small-scale artwork –paintings, watercolours and drawings –is devoted to all kinds of topics: social environment, mundane life, maternity, and religious subjects. All of this is a tiny representation of artwork by female artists which was rather typical and popular in emigration. 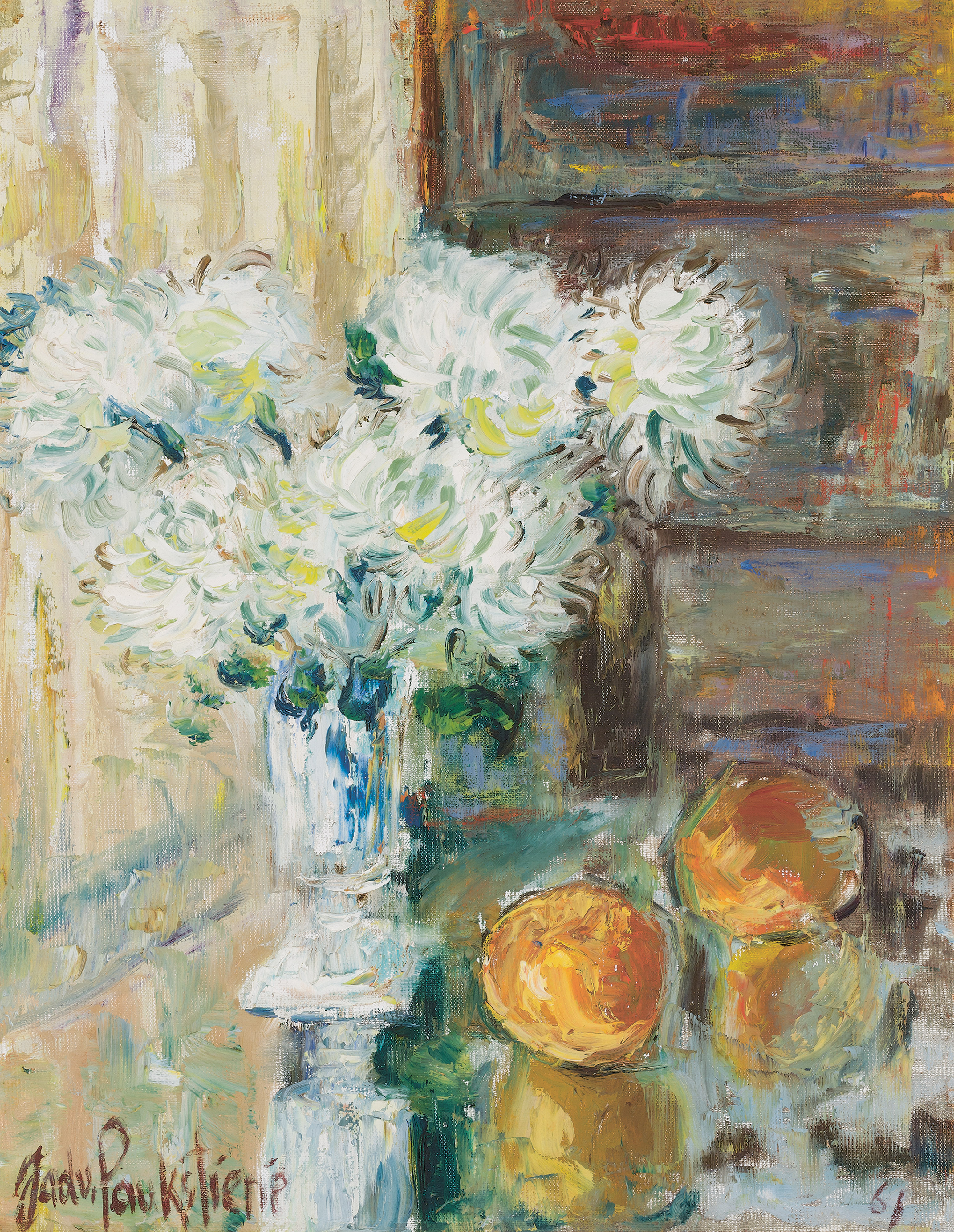