The eternal silence of these infinite spaces terrifies me. (Blaise Pascal)

Last Supper according to Patricija

Patricija Jurkšaitytė (b. 1968) paints a reflection of a painting rather than that of the reality. However, the reflection in her paintings is bizarrely timeless or, to be more exact, frozen in time. It is a reflection of this and another world. Jurkšaitytė’s work based on the motif of Last Supper by Leonardo da Vinci is not about supper at all, but about its scenography. It is about the crime scene, a bodiless space and a modern way of religious confession all at the same time.

Jurkšaitytė studied painting at the Vilnius Academy of Arts with Kęstutis Zapkus, whose main principle of teaching was to encourage his students to search for their own subjects and style of painting by studying the world history of art rather than trying to copy the teacher. Back then not many were interested in the old masters of painting. Jurkšaitytė has always been interested in the melting space between the reality and the painting and in peeking through the windows opened by the masters of Renaissance and Baroque painting. Therefore, it is no accident that the artist uses the glazing technique which is so rarely used by contemporary artists. She paints one thin transparent layer upon another thus allowing her canvas to breath.

From the very beginning the artist was attracted by periphery and marginalia – the things that look like insignificant details painted in the background. She even tended to opt for the elongated format of paintings that remind of quotes. These were painted metonymies of the great masters where any small component, just like the top of an iceberg, represents all the artwork that remains invisible to the viewer. Later Jurkšaitytė took one step further and started painting museum masterpieces and gems from books on the history of art. She was not copying but rather recreating them here and now. In her paintings they look almost the same, but without people in them.

We feel a wave of light radiating from the painting even though we cannot touch it. And even though the humming silence of the painting terrifies, the heart keeps reluctantly repeating: ‘Something must be there.’ 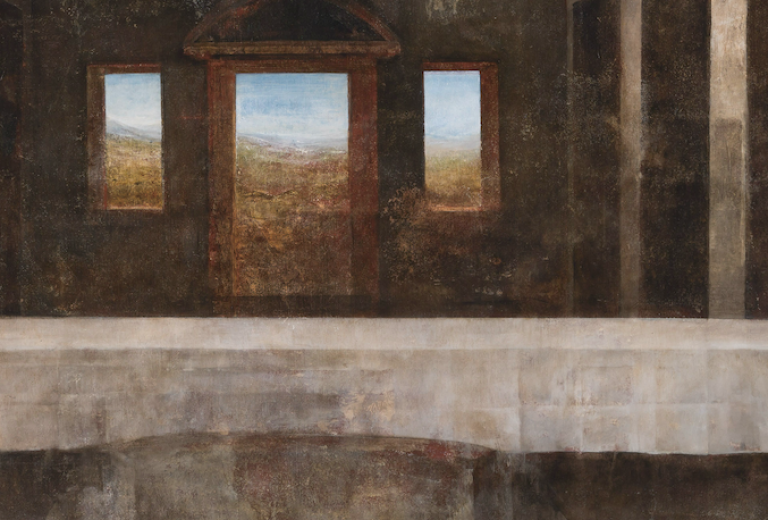 What does it mean? An art researcher would say that this is a kind of appropriation or stealing of an image, work or thing for artistic purposes. Nonetheless, it is nothing more than a method. The only thing that Jurkšaitytė appropriates is the space, the architecture and the interior, but not the image. An empty stage without performers. What kind of an Annunciation could there be without an angel and Virgin Mary? What kind of sleeping Venus can there be without Venus herself? This kind of conceptual ‘dehumanisation’ and the alleged erasure of content expand the philosophical, optical and time dimensions. All of this is best reflected in Jurkšaitytė’s painting Leonardo da Vinci.Last Supper(2014).

The painter considers the viewers to be connoisseurs of painting and Western culture in general. Even if the title of the painting did not contain the name of Leonardo da Vinci, most of us would recognise the framework of the famous fresco which is so often reproduced nowadays. The moment we recognise it, we fill it with the figures that are usually portrayed in the Last Supper and at the same time painfully realise that they are missing in this painting. At this point we can even engage in philosophical deliberations of whether the figures are missing because they have never been there and because the Bible is merely a collective work of literature, or they are missing because the painting represents a modern day look at a period in history whose characters are long gone by now? Or maybe it is a metaphor of God’s death and we are unable to see what we do not believe in? On the other hand, could we actually see it even if we had the faith? And what could a faith requiring material proof be worth?

Nonetheless, Jurkšaitytė’s painting preserves its sacral aura even without human figures in it, and not because of the implicit hovering of the saints, but because of the question that is inscribed in the structure of the painting. The artwork becomes an optical tool and a time machine that anticipates the decisive moment all at the same time. That moment is frozen like a storm cloud and continues to hover in space. This is like foreboding in the form of knowing, in the form of future (for the participants of the Last Supper) and past (for us) moments existing in the present. ‘One of you will betray me,’ Christ says and stretches his arms over bread and wine. The betrayal that has not happened yet is forgiven, but not forgotten as modern-day believers still drink the blood of Christ and eat his flesh as Communion, which is constituted here this very moment.

We remember Leonardo da Vinci’s painting and the lost disciples trying to identify who the traitor is. Peter grabs a knife, Thomas raises his finger (this must be the same finger that he will ‘probe’ the wounds of the resurrected Christ with), and Judas clutches a pouch of money.  Unlike in other paintings on the topic of Last Supper created by other artists, here Judas is not separated from the rest of the disciples. He is right there, next to the Teacher and reaching for wine. His face is dark. He is still there with the rest, but already belongs to the kingdom of shadows, which, just like a metaphysical evil, is always nearby. But the viewer’s eyes are on the light in the centre where Christ is sitting with his arms outstretched.

Jurkšaitytė’s painting contains no human figures, but the drama of the Last Supper is still there. She captures the decisive moment with the help of a slow and long-lived painting technique. The line of perspective leads us to the window glowing in the background (or rather three windows, like the Holy Trinity), and for those of us looking at the empty room of the Last Supper this window represents both the halo of Christ and the promise of eternal life. A glimpse into the afterlife is prevented by the horizontal line of the table covered with a strictly white table cloth. Leonardo da Vinci purified the image of the Last Supper by giving up on various details of the interior and by conveying the intended impression through gestures and figures portrayed strictly in line with the geometry characteristic of the Renaissance period. Jurkšaitytė transfers the motion of belief from the visible to the invisible world. We feel a wave of light radiating from the painting even though we cannot touch it. And even though the humming silence of the painting terrifies, the heart keeps reluctantly repeating: ‘Something must be there.’