A creeper–woman excites imagination and provokes questions. What is she? What is she all about? A young painter, Kristina Ališauskaitė, (b. 1984) already boasts her own recognisable style and topic. She often paints parts of the human body: anonymous heads or hands, transitory conditions between dreaming and awakening, unbeatable comfortlessness, foreboding of anxiety and alienation. Everything is very personal and autobiographic, as if taken from a personal diary.
Her artwork unfolds in rather small formats that are seemingly too tight for her images that are portrayed from close up and without ever specifying who the portrayed person is. Ališauskaitė rarely works on large-scale canvases. Her painting The Plant is an exception in that respect, because there the main character breaks free from crammed spaces and reveals itself in full size. It emerges from behind the underframe with a deep breath or sigh. Nonetheless, anonymity remains: it may as well be that here the artist portrays herself, but the painted image is perceived as an abstract female figure and a symbol.
Maybe the artist invites us to react to her provocative question: ‘Do men see women the way culture sees nature?’ Can we still operate in dichotomies, such as man (culture) versus woman (nature); man (publicity) versus woman (privacy/home)? Are women closer to nature or are they a continuation of nature?

The painting may be interpreted from the feminist point of view, too: plants, especially flowers, are usually associated with a female image in various aspects. Even though, the author herself denies it. ‘I do not see feminism as the axis or the source of my artwork. Certainly, when interpreting my works one may look at it from that angle, too. I am open to various interpretations of my artwork,’she says.

The female figure, like the axis of symmetry, divides the canvas into two approximate background planes, with one of them being slightly more translucent than the dark one. Ališauskaitė suggests her own interpretation of the painting. ‘It is a portrait of a young woman with a plant growing from her inside as a symbol of her inner “me”. Its dynamic form conveys her free and spontaneous nature, which remains intact by standards and rules, just like nobody can repeat somebody else’s life,’the author says.

The creeper-woman is flexible, watercolourish and sketchlike. Both the first and the last brushstrokes, including the rest of the dabs, are made public. It all looks airy, fragile and seemingly unfinished in terms of traditional thick-layered painting with characteristic pastosity. 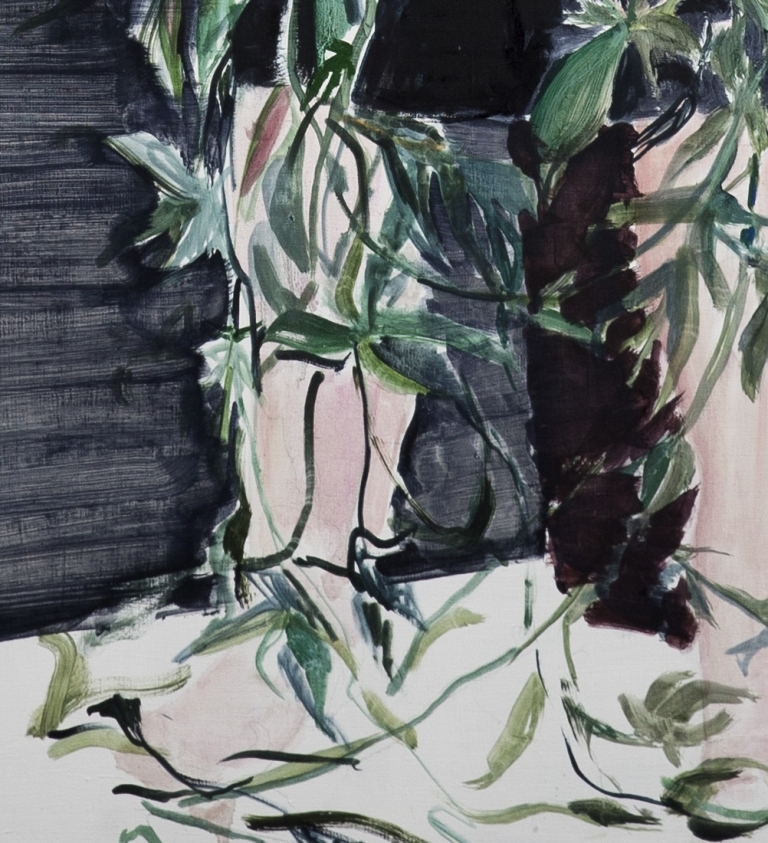 The creeper-woman is flexible, watercolourish and sketchlike. The artist uses a single, translucent layer of paint through which the canvas becomes visible. Ališauskaitė is not trying to hide the process of creating her artwork. Both the first and the last brushstrokes, including the rest of the dabs, are made public. It all looks airy, fragile and seemingly unfinished in terms of traditional thick-layered painting with characteristic pastosity. In a way, this says that the artist is not programmed to plumb the depths of such particularities as minute modelling of forms, because the most important goal is to capture the things that are most important and spontaneous.

The classical impression is subject to erosion: the creeper grows from the woman’s mouth, which reminds somewhat of surrealism and brings back the tension so characteristic of the usual small-scale artwork by Ališauskaitė. This almost antique pillar-woman is a self-eating dragon that takes a psychoanalyst to unravel.

Almost all of Ališauskaitė’s painting is monochromic and includes just a few shades of colour that vary between unpredictable black and several other shades from the quenched spectrum of colours. The same could be said about this painting. The author herself claimed her paintings to be multi-coloured by explaining that black colour burgeons like a rainbow, too, since it has so many nuances and colour to it.

Ališauskaitė’s talent did not go unnoticed. In 2013, she won the Audience Award in the annual competition, The Young Painter’s Prize. That same year she was among the ten winners of the international Saatchi Online Showdown Competition‚Painted Faces. In autumn 2014, Ališauskaitė was included in the publication 100 Painters of Tomorrow published in London and New York by the famous publishing house Thames & Hudson and which is devoted to the most promising contemporary painters; she was the only artist from Lithuania presented there. In 2016, Ališauskaitėbecame a finalist of the Arte Laguna Prize 2016 international competition in Venice. The artist often holds solo exhibitions in Lithuania and abroad and takes part in group exhibitions.

It is a sheer pleasure for contemporary art connoisseurs to try and unriddle the secret of the creeper–pillar–woman. I therefore invite the viewers to suggest their own solutions to this personal rebus, because I only demarcated the contour of a subjective impression. The journey following the movements of Ališauskaitė’s mastery brushstrokes and twists of imagination may appear to be simple, but only at the first sight, as her laconic style may end up being really deceptive. 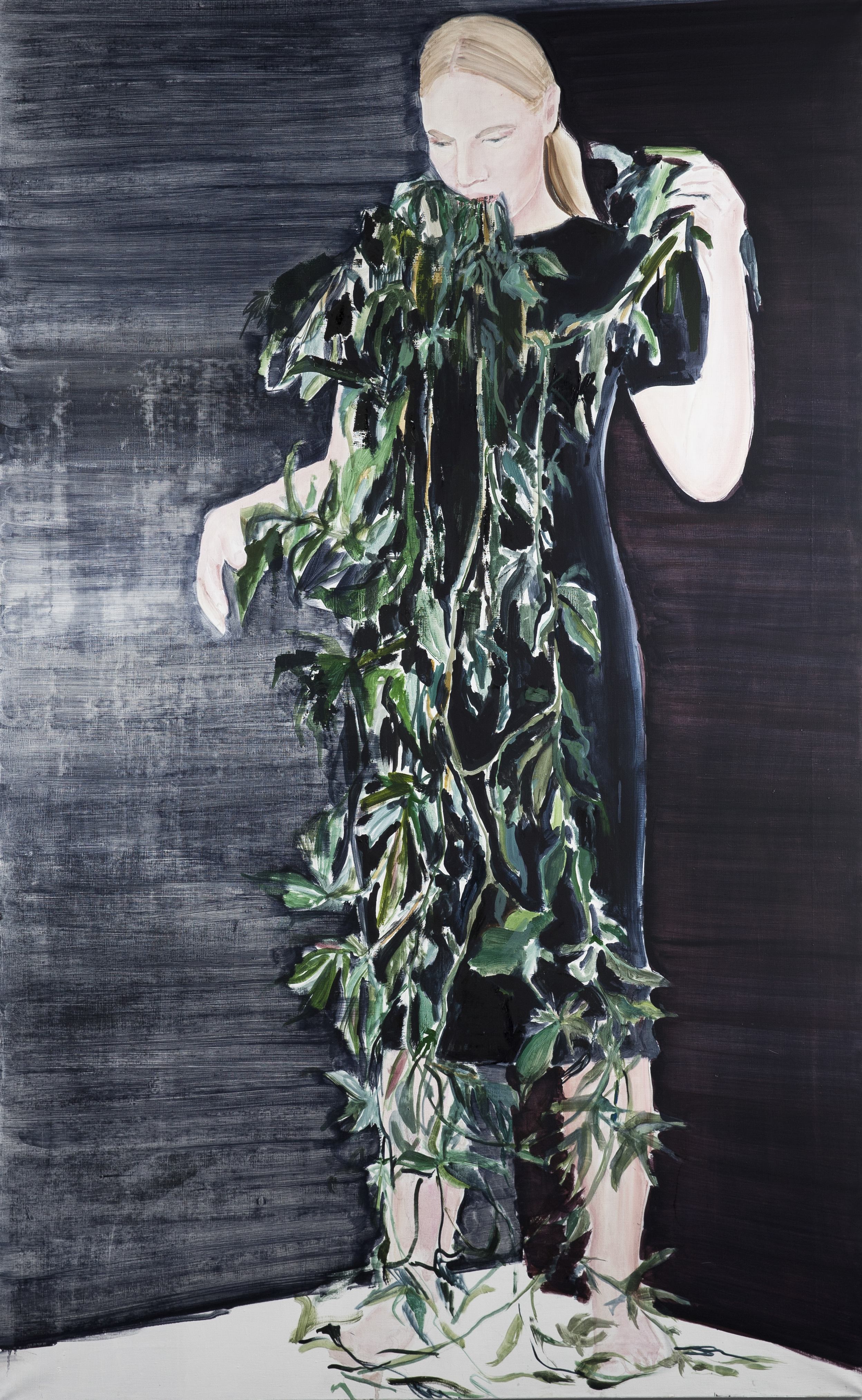