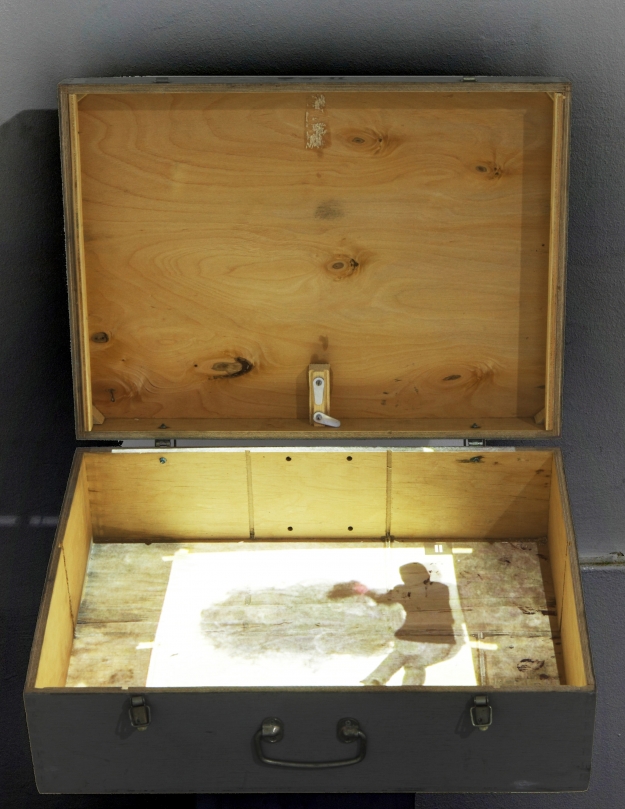 The artist and her assistant Jose

Jurga Barilaitė (b. 1972) always supplements her personal experience with a wider cultural or social context. The artist studied traditional painting, but soon after graduation started ‘painting’ with her body and experimenting with various materials. Later she took to video art, performances and installations. Still, now and then the artist finds a way to return to traditional painting the way she does in her video projection Little Jose / The Box (2007).

In the 7-minute video the camera is projected on a wooden box made to transport fragile objects. Further in the projection we see a large canvas spread on the floor and painted in black. A tiny human figure is energetically washing the canvas until it becomes perfectly white again. It is easy to recognise that the person in the projection is the artist herself wearing a mask. Sharper viewers will notice that they are being shown a reverse view where the entire action is presented backwards, that is from the end to the beginning. Still, in the video reality the main character is Jose and he is the one who makes the canvas covered in black look perfectly white again.

"You see how necessary it is to have someone like Jose. I have always been thinking about having one myself and kept saying that he would wash my brushes. When I still used to paint, I would have loads of unwashed brushes. Jose first appeared in the form of a byword." 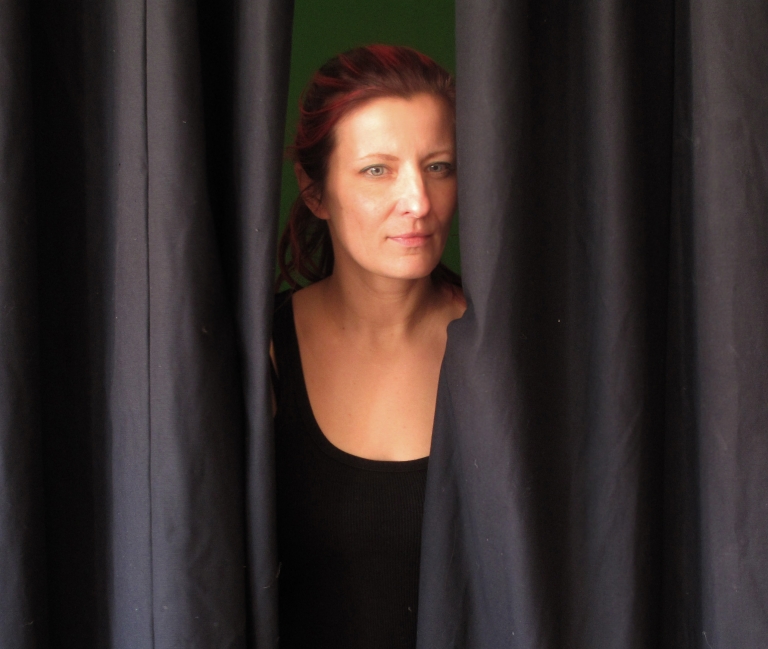 Jose is a character invented by the artist. The prototype of Jose lies in a book about painter Diego Velázquez that the artist once read. In the book Velázquez had an assistant named Jose who washed his brushes and took care of all the other practical mundane matters in the artist’s life. Barilaitėgrew tired of all these chores herself and started imaging having a tiny, silent and industrious assistant, Jose, in her own life. The text Little Jose reads as follows: ‘You see how necessary it is to have someone like Jose. I have always been thinking about having one myself and kept saying that he would wash my brushes. When I still used to paint, I would have loads of unwashed brushes. He could also make underframes and simply be there next to me. Jose first appeared in the form of a byword: ‘Oh, Jose will wash this.’, ‘Oh, this is definitely for Jose to do it,’etc. With time this ‘verbal’Jose inexplicably grew into a ‘video’Jose. I kept on talking about him and with time I let him inside, tamed and disguised him.’

Jose appears as the main character in this video projection. He acts as a personal assistant of the artist and cleans the canvas covered in black paint. This is a multi-meaning and multi-layered metaphor. 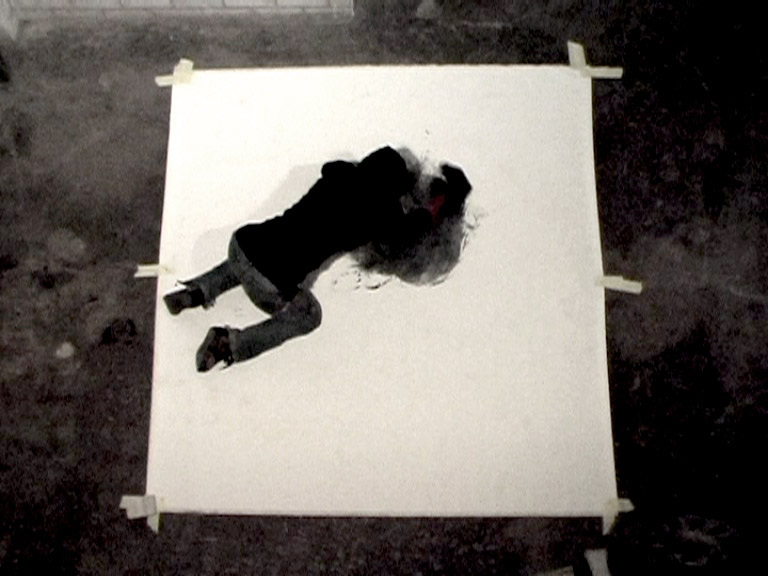 Jose appears as the main character in this video projection. He acts as a personal assistant of the artist and cleans the canvas covered in black paint. This is a multi-meaning and multi-layered metaphor. In the context of the artist’s autobiography, this is a willingness to break free from the colour black and darkness in her creative career and maybe even her life. In the context of history of art, the work gains a feminist touch. It reminds of modernist painting where big men are fighting over their big canvases and leave their genial feelings, thoughts or signs of their subconsciousness expressed on them. In her video projection Barilaitė, on the contrary, cleans her canvas of paint and the cleaning is not done by the artist herself, but by her male assistant. Finally, we may look at the work as a desire to cleanse and purify oneself, because there are moments in life when you feel that yearning for someone to come and clean it all up for you, be it a canvas covered in paint, messed feelings, a mist covering one’s goals or even life in general. For that purpose one may invent a personal assistant like Jose. However, just like in the video where the artist is forced to act the invented character herself, in real life it too will all have to be done with our own hands, because no invented or real man will ever be able tidy it all up for us, even if he really wanted to.

Barilaitė does not create feminist art. Instead, she takes feminism for granted these days, just like tolerance or anti-racism. However, in creating art she does not hide behind a genderless mask. Therefore, through her artwork she inevitably expresses her position as a female artist or as a woman. She may box out a portrait of a child by using boxing gloves covered in paint. In her video projections she drowns in a glass of milk, cries, shouts, dances and openly talks about herself. By doing so, Barilaitė also talks about herself as an artist and about herself as a woman. It has already been mentioned that the artist does not artificially restrict herself to the female topic, thus her artwork turns into a narrative about a contemporary human being in general without emphasising any particular gender. 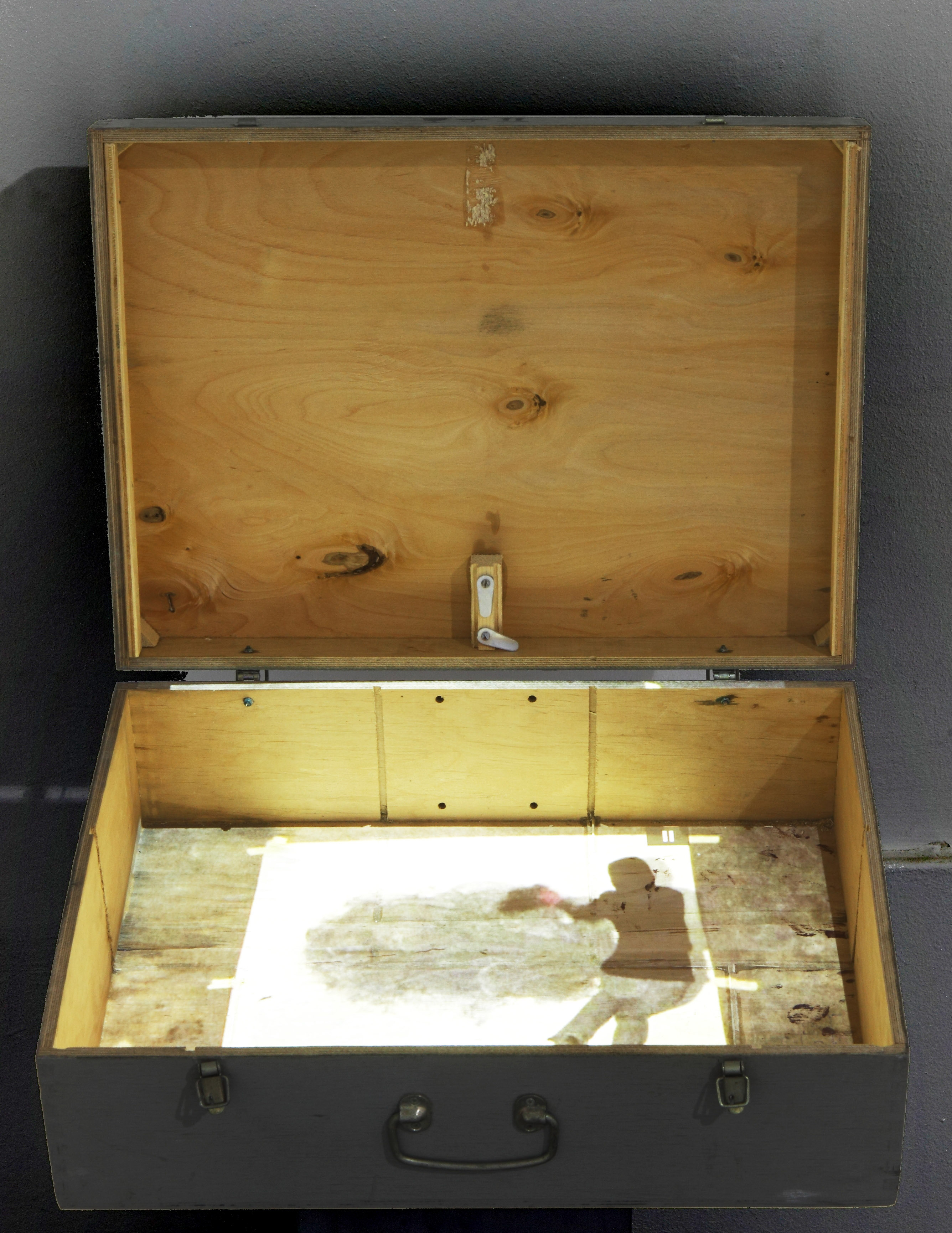