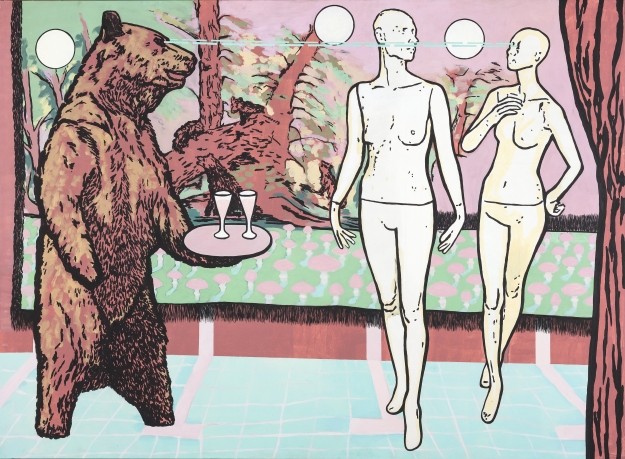 Jolanta Kyzikaitė (b. 1980) is an artist who did not give in to the ‘fashion’ that prevailed in Lithuanian painting of her generation, such as interpretations on Gerhard Richter’s or Luc Tuymans’ manner of painting in subdued colours. Kyzikaitė’s artwork is unique in that the artist reinterprets the principles of pop-art by impregnating them with authentic experience. The characters of her paintings look like they have strayed in from comic strips, colourful pages of press or virtual reality. Multi-layered subjects of Kyzikaitė’s paintings, (self-)irony and various hints of realia make her artwork a peculiar manifestation of Lithuanian neo-pop art the roots of which go back to the early paintings of Algimantas Švėgžda and even Kostas Dereškevičius and Algimantas Kuras. Modern day artwork by Kyzikaitė is closely related to the works of Kęstutis Grigaliūnas, Laisvydė Šalčiūtė or Linas Liandzbergis.

The interesting thing is that this conscious gliding along the surface of mundane life, poster-like and decorative images, including irony, are characteristic not only of Kyzikaitė’s paintings and drawings. In 2012, she created an installation Straw Gardens which surprised the viewer with the contrast between pink plastic cocktail straws as a symbol of obnoxious Barbie-like innocence, banal everyday things of mass usage and the sacral archaic tradition. Especially knowing that according to the old Lithuanian customs the table laid for Easter breakfast was a symbol of the earthly garden and the straw garden hanging above it was a symbol of the top of the tree of life. In the eyes of our ancestors, rituals performed under it equalled the creation of cosmos. Thus, it is an accurate remark pointing to the contrapositioning of the sacred and the simulacrum, between traditions and unified production.

Kyzikaitė is a consistent and methodological artist creating artwork in entire series and expanding on something that seems to be of interest for her and stems out of her personal experience or environment and doing so in an attentive and well-rounded manner. Her painting Intimate Conversation is a reflection on her creative experiment based on her personal fund of literary knowledge. Being interested in the subject of gaming, she painted a series of works based on Luk Rhinehart’s book The Dice Man (1971). The main character of the book named Luke, bored and unfulfilled with his life, starts making decisions based on the roll of the dice. Every number on the dice corresponds to a particular action, but at least one of the actions is supposed to be risky.

Speaking about Kyzikaitė’s works, coincidence points to the missing links in the world and pierces the viewer with a feeling of deficiency and insufficiency which is so difficult to define. 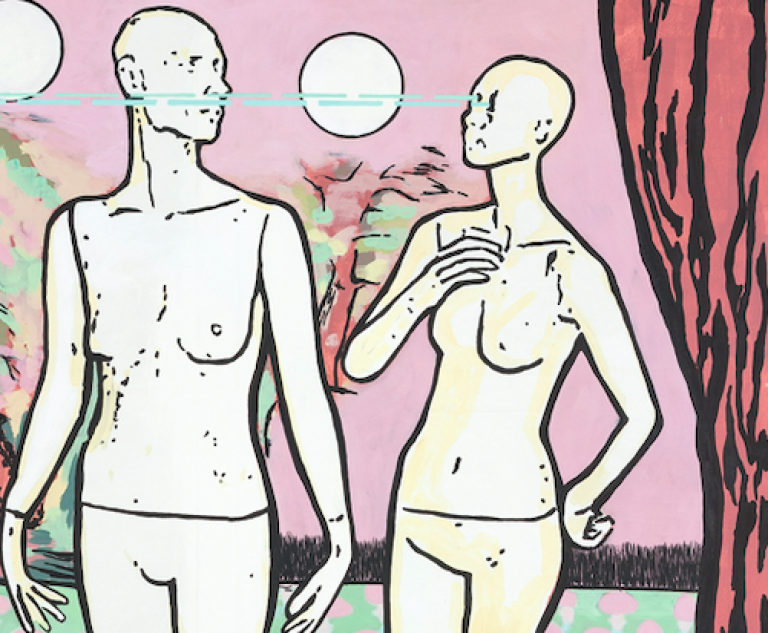 Kyzikaitė transposed the principle of book writing into her painting and created a peculiar archive of images based on illustrations for Aneta Anra’s book Promiscuous Girls or Love According to Nuremberg Virgin (including the drawings that were not included in the book), images captured in her notebook, closely observed remarks, a variety of sites, circumstances and situations: swimming pool, forest, café, grandmother’s place, garden, etc.

The artist chose a collage-like, surrealist way of painting focused on bringing back together scattered images and finding a new logical connection between them. The objects portrayed in this painting seem to have strayed in from a number of seemingly unrelated fields. The bottom part of the painting or the floor reminds of the interior of a sports centre. The mat hanging on the wall is reminiscent of a kitsch decoration in a grandmother’s hut. Two bald-headed female staffage mannequins are forging a strange dialogue with the bear holding a tray in his hands who looks like a waiter serving drinks at a reception. The line along which their eyes meet is marked as if it was the trajectory of a shot. The heavy curtain on the right makes it all look like a scene from a theatre play.

Viktoras Liutkus once wrote that the pop art created in the former Soviet block countries, which used to ironically sneer at Soviet patterns, emblems and inexpiable craving for things, has become absolutely instrumental and acceptable for modern day society as a witness of solid consumption, attribute of mundane life and safeguard of bedroom pleasures. Nonetheless, in her interpretation of visual expression in pop art, Kyzikaitė touches upon many more sensitive and topical situations in the life of the man and the world. Coincidence reigns in her monumental works. You never know who and why or what kind of invisible mechanism arranged all the figures the way they are arranged in her paintings. In philosophical terms, behind every coincidence there are certain objective links, events or something that can either be or not be, or can further develop one way or another. Speaking about Kyzikaitė’s works, coincidence points to the missing links in the world and pierces the viewer with a feeling of deficiency and insufficiency which is so difficult to define. 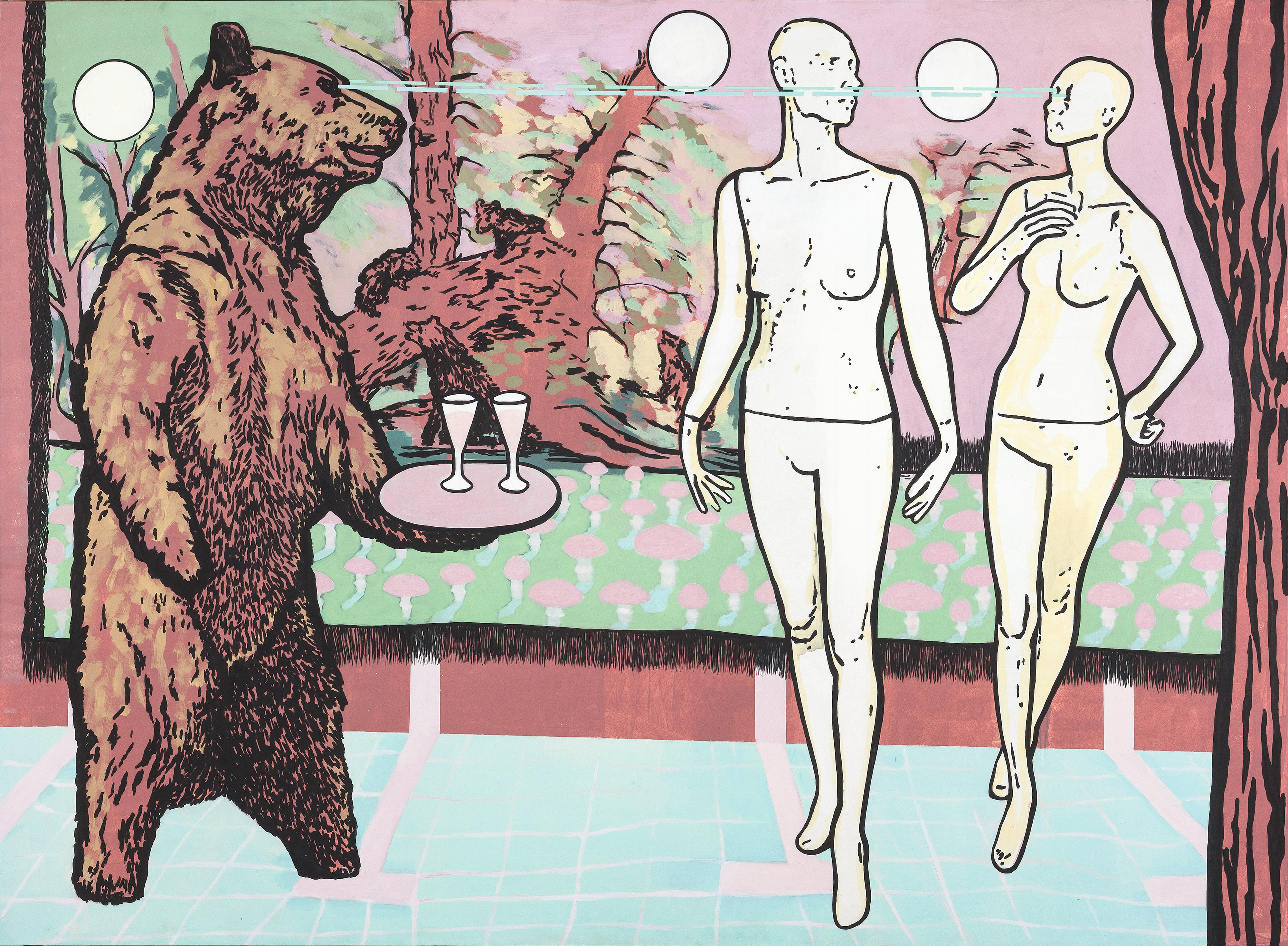