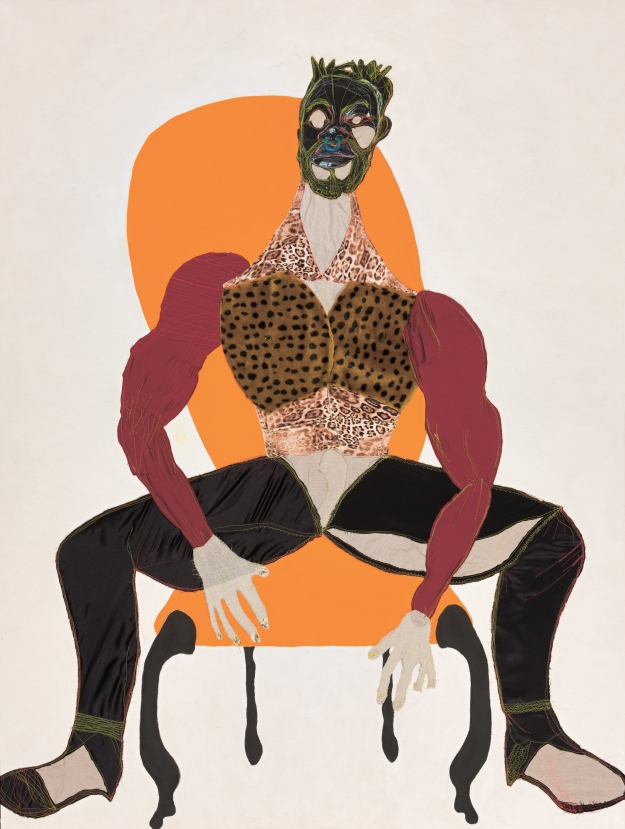 Tschabalala Self (b. 1990) grew up in Harlem, New York, where African-American culture prevails and all the silly jokes of the whites about the blacks would definitely not be understood, to put it mildly. One of the artist’s projects was devoted to her local store and people from her childhood – all those who frequented the store or worked there. Rows of bottles with lemonade, fabric softener, ice-cream with all of its oral charms, teenagers ready to snap at comments and other characters. Their bodies are irregular and sensuous.

Self’s world looks like the wrong side of the glamorous world presented in glossy magazines, where everybody’s skin is smooth, body lines are ideal, genders are two and they are clearly separated, wording is meaningfully optimistic, and it even seems that not a single portrayed character perspires or has any other physiological needs. The body with all of its down-to-earth carnality is the keyword of Self’s artwork. The artist thinks through the body and portrays bodily sensations by exaggerating the things that pierce something else and shows where our imagination takes us when we look at other people. And the place where it takes us includes prejudice and the importance of a garment in creating a role, including the artist’s willingness to be as open as possible without apologising for imperfections or non-standard looks.

Tschabalala Self portrays voluptuous bodies. Even though her works are full of breasts, expressive buttocks, thrusting and resting phalli, they are far from being pornographic. (One of the main criteria in deciding whether a movie is pornographic or not is whether it includes images of sex organs, but then what about men’s, women’s and nudist beaches, health care institutions, cases of walking around your house naked or mere courtship between those who are close?) In the artist’s works, the erotic parts of the human body are portrayed alongside with bulging bellies, loads of wrinkles, trousers pinching one’s fat waist, and unattractive facial expressions, which make this nudity look different. The images created by Self provoke us to reconsider what is normal and attractive, what is being thrust upon us and what and how it actually affects us, what we notice and what stays in our subconsciousness. When and how a body becomes unacceptable and why?

Even if you touch all the linen, cotton, nail glitter and synthetic fur in your mind only, sooner or later the view develops into a more general scene where you are already touching someone’s body. 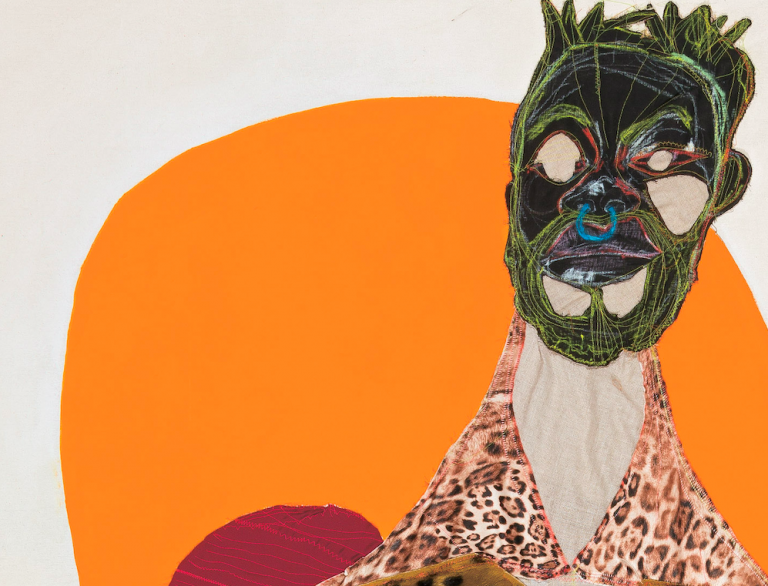 The artist rejoices over the sexuality, cravings and images of her characters like a child, though without being infantile. This position of the artist is not drenched with supressed, and thus degenerate perverseness. Rather, she is impulsive, daring and following her pure curiosity. Her works are not merely about the body, but also about corporeality in technological terms.

In her work Mane the artist combines both painting and textile. There is very little paint in it and the figure is mainly made of various types of fabric of different textures and stiches made with the help of a sewing machine. From far away, the giant work looks like a classical collage, a cousin of French modernism, but a closer look reveals its pulsation in the rhythm of the stiches and, as textile usually does, seduces you to touch it. Fingertips can’t help touching the patterned leopard fur waistcoat. I feel the wish to stick my finger in between his ribs as if he was the incredulous St Thomas and then check the way his joints are connected.

Even if you touch all the linen, cotton, nail glitter and synthetic fur in your mind only, sooner or later the view develops into a more general scene where you are already touching someone’s body.  After you spring back from it, you must quickly realise whether it was the body that wanted to be touched, or it was you who wanted to touch the body, what the situation is and what our roles in it are. Have I trespassed the limit, has this spectacular figure sitting with his legs spread wide cunningly lured me into a trap? Did I like it, etc.? There is the entire infinitude of baffling questions.

In formal terms, the artist analyses queer identities and bizarre senses of the people who are convinced that they are normal. Even though once you start probing what normal is, nobody seems to know anymore what being normal means. Self’s characters are really likeable, even though slightly comic, but dignified and not denying their reality. Moreover, I think this is what makes the owners of the bodies disciplined by various realia to secretly admire and envy them. The author has made an impressive career, which helped her realise that creative endeavours are in a way a political act, too, because through art she portrays her own experience and that of others who are very much like her. The experience of those who were invisible for a long time. 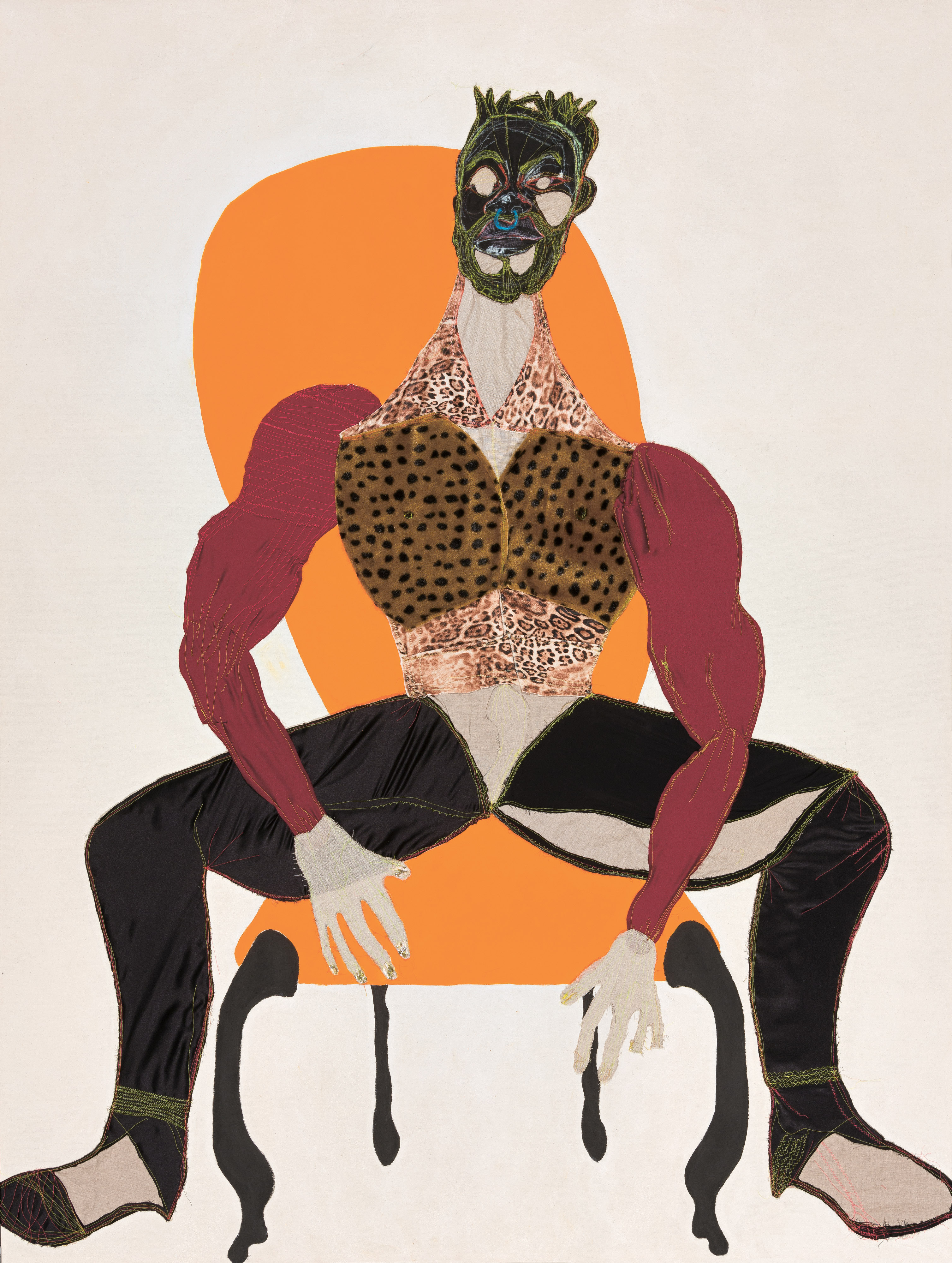