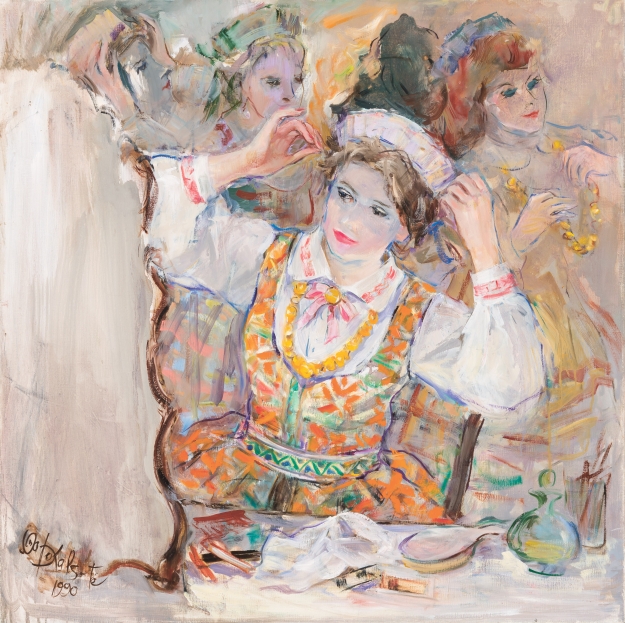 Who is the fairest of them all?

The several seconds in front of the mirror belong to her alone no matter what. Having paused for a moment, all of them – young and old, ladies and those with nothing, the big-hearted and the giddy-headed – look as if they are in the old fairy tale where they are about to ask the famous question: ‘Mirror, mirror, on the wall, who is the fairest of them all?’ The composition by the American Lithuanian artist Ona Dokalskaitė-Paškevičienė (1912–2007) titled Behind the Scenes (1990) depicts a Lithuanian girl – a portrayed ideal of immortal beauty.

The artist painted this work towards the end of her days, at the age of 88. To tell the truth, her age is absolutely irrelevant here. The painting boasts a clear composition, firm drawing, it is impulsive, dynamic and shaded, and almost the same as those of the 1960s or the 1980s when the artist presented her artwork as part of important exhibitions in the USA and her portraits and landscapes were awarded prizes and received wide recognition.

Artists have been fond of the image of a lady with a mirror since the early days. This motif bears a number of various meanings, starting with the symbol of vanity and going on to various meanings and shades of female charms. The feminist art theory of the 20thcentury presented a number of rather convincing explanations as to why artists have always been so fond of painting women. This appears to be a feast for male eyes and fantasy.

Dokalskaitė-Paškevičienė has lived in America since 1949 (before that she lived in Lithuania, Belarus and Germany) and most probably had not even heard of such theories at all. She had a simple credo: to serve humankind, to embellish and gratify it. The artist came up with this credo in the USA and it was determined by her hard and black-and-white life experience. During her studies with sculptor Juozas Zikaras and at Vitebsk School of Art, Dokalskaitė-Paškevičienė learned the basics of classical art and aesthetics, but when working as an artist in Soviet Belarus, she faced all the censorship and social realism in practice rather than in theory alone. After she moved to America, she was tormented by war memories, including her experience as an expatriate and fears of being deported back to the Soviet Union. Only after Stalin’s death were her fears allayed. The artist wrote the following words: ‘In the world of art I want to communicate with the viewer, I long for this connection. I am a small fraction of humankind and my vocation is to serve it, to embellish it and to make it happier.’Dokalskaitė-Paškevičienė also painted landscapes and still lifes, but her main genre was portraits.

Nonetheless, the most important figure in the painting is the beautiful young lady in the centre wearing a national costume. She is studying her reflection in the mirror, fixing her hair and crown and anticipating being noticed the next minute. She is still behind the scenes, but in her thoughts she is already on stage with all the spectators, applause and limelight. 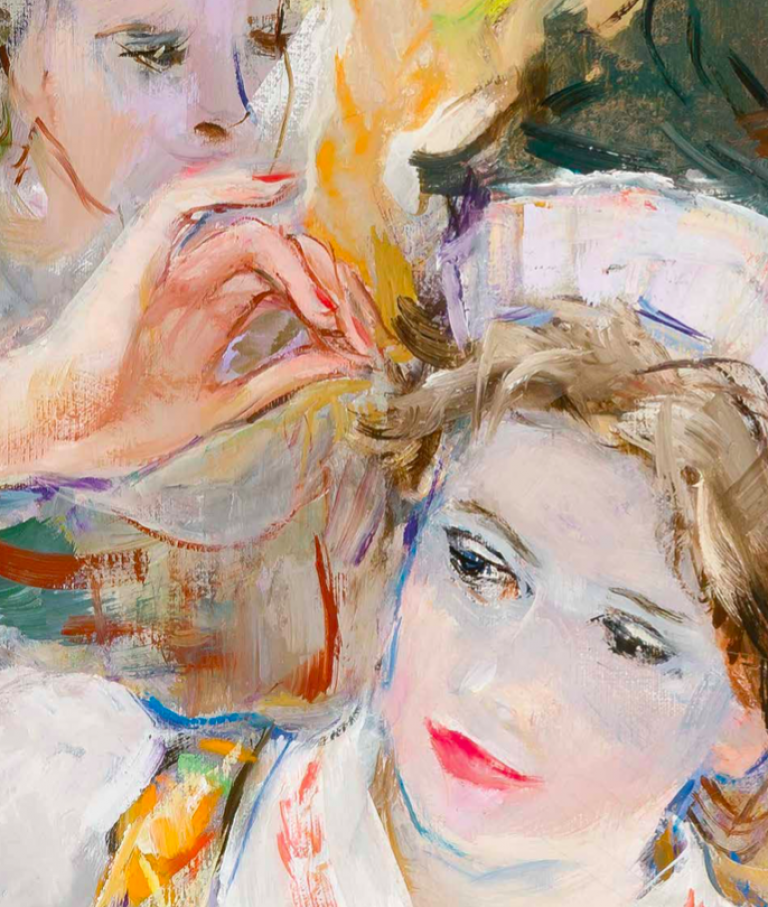 At first glance the painting Behind the Scenes looks like a portrait and it seems that there is only one character portrayed in it. Actually, there are four women in the painting. All of them are smartening up and, most probably, getting ready to go on stage. The artist did not give any clue as to what kind of stage this was: was it the famous Lithuanian Opera Company of Chicago or maybe the national song and dance festival that expatriate Lithuanians were so fond of. For the artist, the most important thing was to convey the atmosphere of an approaching festivity and to portray the beauty of Lithuanian girls which is so highly praised in Lithuanian folk songs. The artist, just like Henri Toulouse-Lautrec himself, accurately painted the faces and hands of the girls in the background, and even highlighted the gloss of the necklace on one of them. Nonetheless, the most important figure in the painting is the beautiful young lady in the centre wearing a national costume. She is studying her reflection in the mirror, fixing her hair and crown and anticipating being noticed the next minute. She is still behind the scenes, but in her thoughts she is already on stage with all the spectators, applause and limelight.

Most often Dokalskaitė-Paškevičienė painted her immediate acquaintances and people whom she knew well. We do not know whether the painting Behind the Scenesportrays some specific woman or a generalised character. The artist emphasises her prima donna-like importance by seating her in front of the mirror and providing her with a wide range of cosmetic appliances.  Still, most probably, the painter was mainly concerned with portraying the beauty of this Lithuanian girl rather than the details in her environment (the latter are recognisable, but presented in a rather generalised manner). The young lady in the painting corresponds with the prevailing ideal image of a Lithuanian girl. For the Lithuanian diaspora in America, the woven and embroidered national costumes which were brought from Lithuania was an extremely important part of their image. The girl portrayed in Lithuanian folk songs –the weaver of Lithuania –is the pride of the whole nation and a proof of its industriousness and patience. The symbolism and romantic nature of Dokalskaitė-Paškevičienė’s painting can have a two-fold interpretation. It can be taken for an expression of national neo-romanticism, of which everybody is bored to tears, or as a documentation of the period in time.

The painting was created in California at the time when Lithuanians on both sides of the Atlantic Ocean experienced a national revival. Thus, this work might be an expression of the spiritual thrill experienced by the artist who was forced to spend most of her life far away from her fatherland. 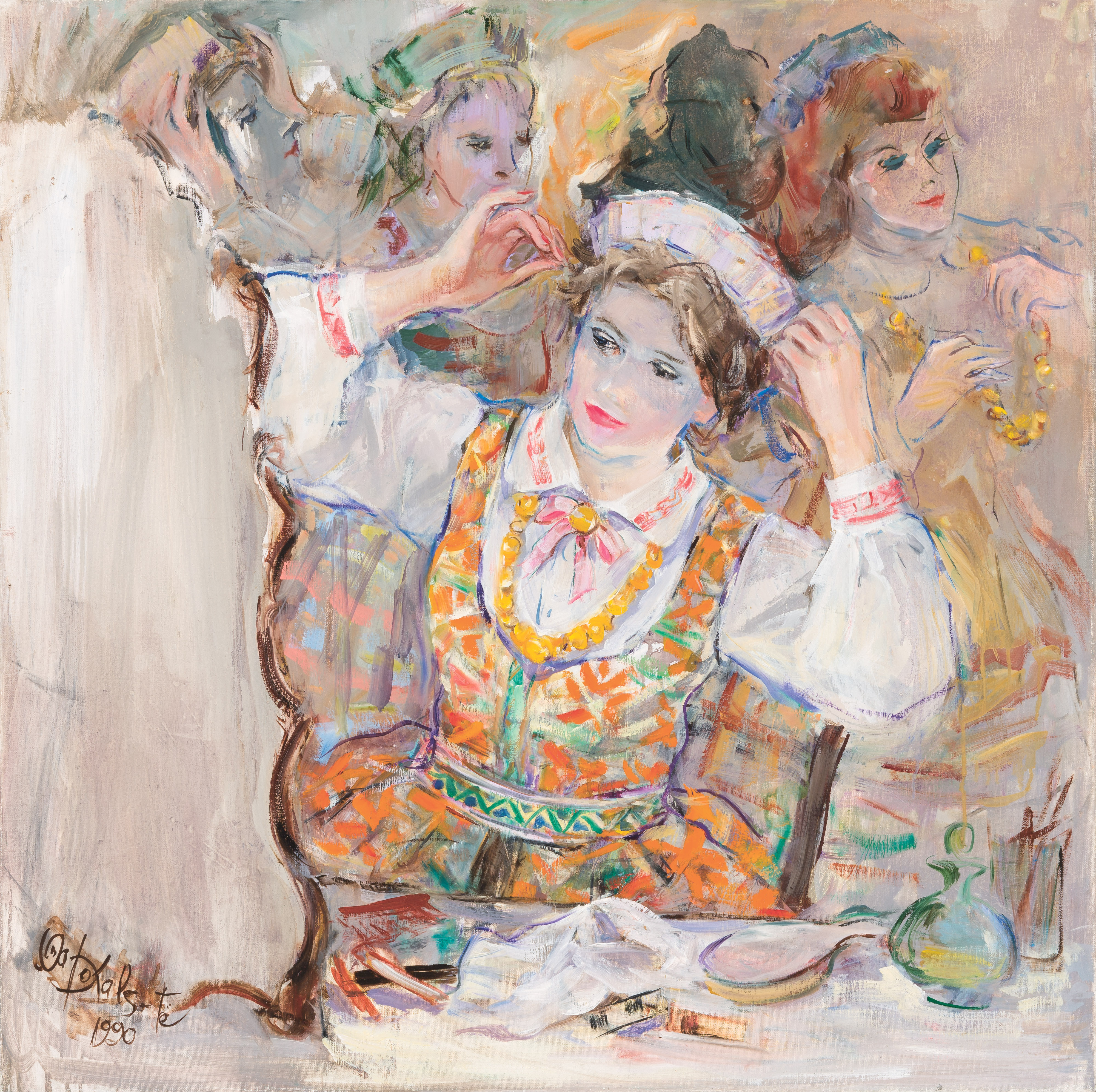