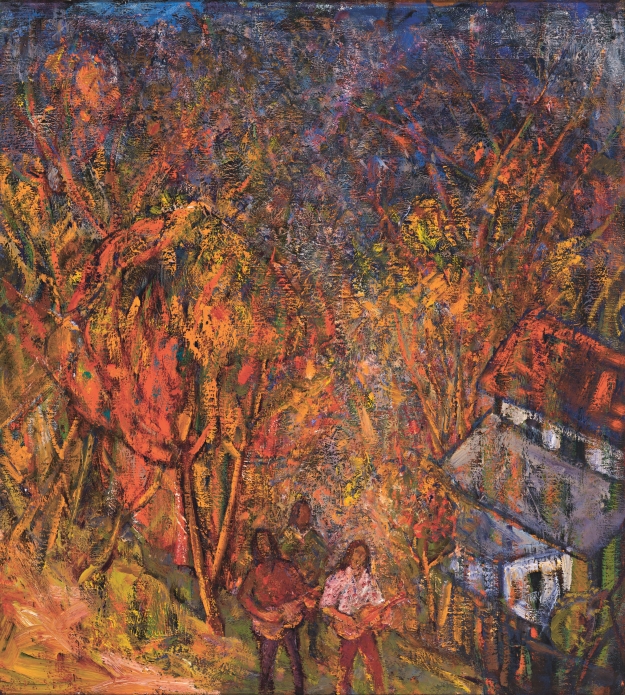 Which world do these musicians come from?

In the interwar period, Marija Račkauskaitė-Cvirkienė (1921–2004) was a promising young artist. In the Soviet times her image as an artist was overshadowed by her role as the wife of Petras Cvirka, a writer and a flagman of the Soviet regime. She spent the ten final years of her life in the restored independent Lithuania. Throughout the three periods in history she was regarded as a good or very good artist. As a new graduate of Kaunas Art School, where she studied painting, she received a lot of praise from her colleague Petras Tarabilda and even the exacting art critic Mikalojus Vorobjovas. Greater attention was paid to female art during the interwar period, when the Lithuanian Female Artists’ Union, established in 1938, was very active, and this also aided the strong debut of the young artist, who was member of the union. During the Soviet times, colleagues and art critics (Leonas Katinas, Augustinas Savickas, Dalia Ramonienė and others) praised Račkauskaitė-Cvirkienė, too.

Certainly, nobody would even dare to criticise the wife of Petras Cvirka himself, who ‘brought Lenin’s sun’to Lithuania. Being a wife of the famous writer ensured luxurious accommodation, a car, a place on the list of individuals supported by the state, the possibility to shop in a special food store at a time when the usual shops were almost empty, and an obligation to represent the ideology, that is to preserve the illusion of a beautiful family of Soviet intelligentsia, know ‘your place’and create artwork on certain specific topics from time to time. The binding shadow of her husband, who was a person of national importance, encouraged the artist to take to chamber painting where there was less tension and more freedom, because chamber painting was not considered as important a genre as wall painting or large-scale thematic artwork.

The vibrant rigmarole of resonant combinations of colours incites imagination and it becomes almost possible to hear the sounds of music carried down the slope on a warm day, accompanied by the murmur of trees, the sudden bark of a dog, echoing footsteps or even laughter. This was part of the brighter world that the artist created in her paintings. It was a different life to the one that her real life could offer. 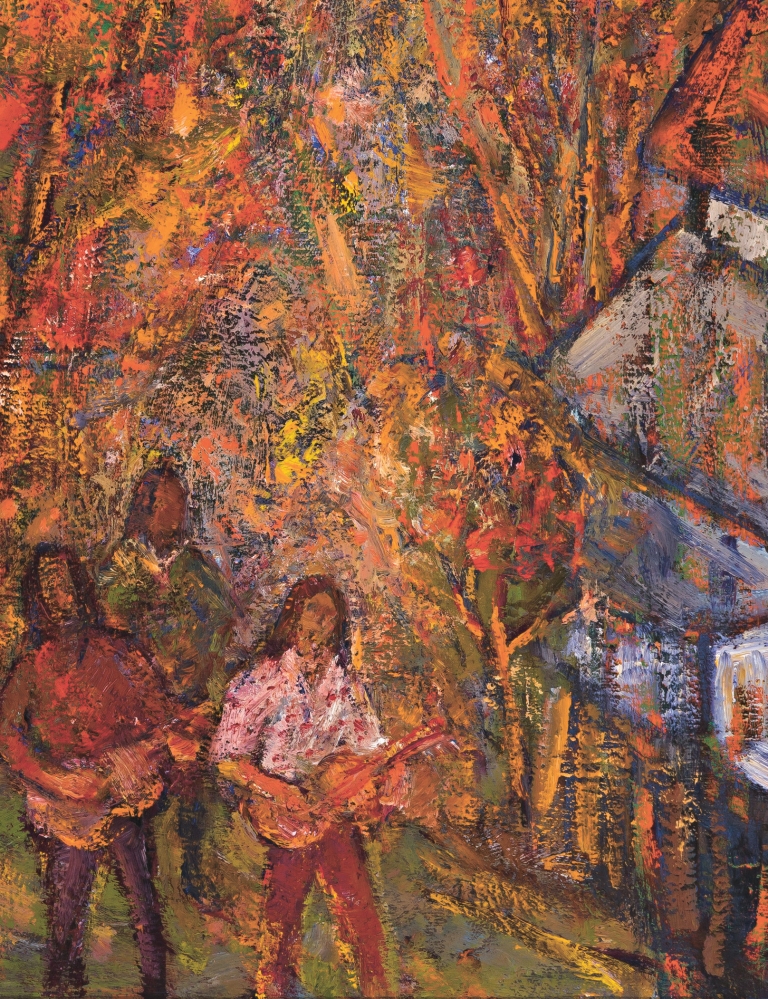 Račkauskaitė-Cvirkienė’s work Musicians (1971) seems to represent a very light and innocent genre. In Soviet times, it would have been labelled as a painting whose theme was leisure.The artist may have portrayed a scene from Vilnius (she liked Antakalnis residential district very much) or Kaunas (where she spent her young years in Freda district). A group of young men playing guitars is going up the hill on a warm autumn day. The contours of trees and men vibrate as if taken from canvases of French symbolists, which Račkauskaitė-Cvirkienė could have seen during her tour around Europe after her wedding. The painting throbs with the beauty, flight and freedom of a young night and young person. Freedom lies not only in the relaxed movements of the figures in the painting, but also in the long hair of the men. Knowing that during the late Soviet times men with long hair were chased after by the police, who would forcefully shave their heads and punish them for hooliganism, such a choice of the artist appears to be rather risky.

However, "Musicians" was not painted in a realistic or documentary manner. Therefore, both place and time remain unknown. It might even have been the hills of Paris or even Spain. They might even be travelling Roma. Or maybe it is a scene from a fairy tale with royal musicians on the way to the castle. Musicians are an allegory of music, beauty and leisure (or merrymaking). Ancient Greeks and even more ancient Egyptians used to depict them. It is an extremely popular motif in Modernism, too. Only Pablo Picasso can turn them into a logjam of colourful figures. However, all that Račkauskaitė-Cvirkienė could do was make an allusion to uninhibited creativity and improvisation.

The vibrant rigmarole of resonant combinations of colours incites imagination and it becomes almost possible to hear the sounds of music carried down the slope on a warm day, accompanied by the murmur of trees, the sudden bark of a dog, echoing footsteps or even laughter. This was part of the brighter world that the artist created in her paintings. It was a different life to the one that her real life could offer. It is not surprising that the intelligentsia of the time liked Račkauskaitė-Cvirkienė’s still lifes, landscapes and portraits, which she painted with great mastery and talent. They often were given as presents on various occasions. Her artwork became a peculiar form of escapism which the majority of Soviet people living in a strange reality needed so much. 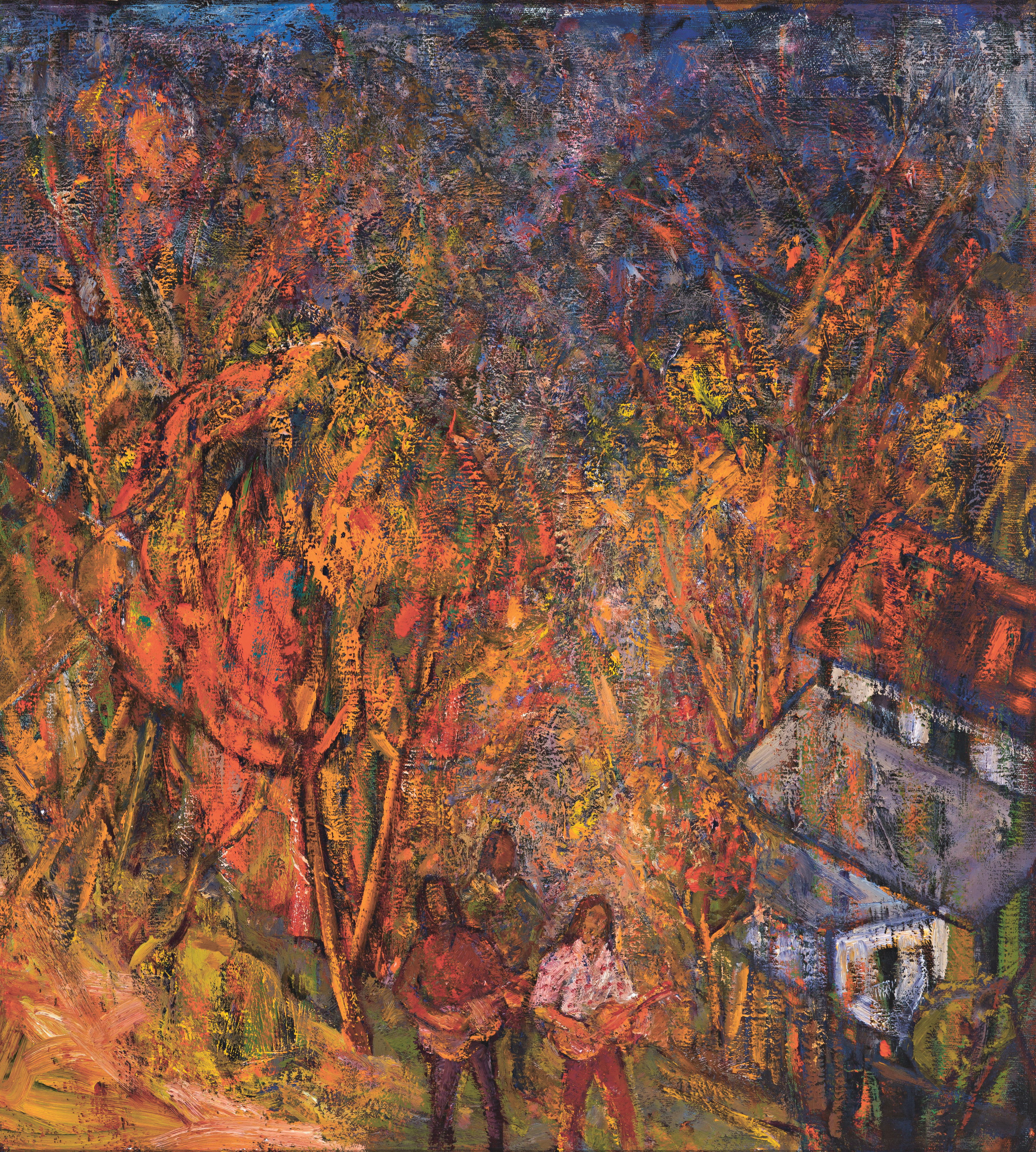