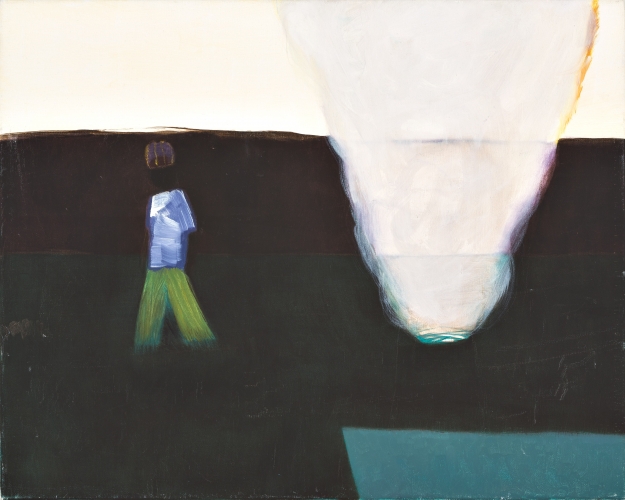 As my plane descends and the trees get bigger and bigger, I keep thinking about Eglė Gineitytė (b. 1968) and remember her painting Descent (2017). This artist opts for one of the difficult ways of painting. Like a plane that is about to land, but suddenly stops and hovers in the air, she moves towards a minimalist generalised image, but at a certain point stops and never takes the last few steps that would lead her to abstraction. The artist intentionally moves in the direction of banal and primitive motifs, however, she never trespasses the boundary, but rather stops at it even though at the same time she is also behind it and keeps balancing somewhere there. One could even say that the artist is inclined towards a sentimental narrative, but at the same time she stays somewhere else, where nothing is too sweet yet. It is difficult to understand how she keeps this balance. Certainly, her walking on the sward’s blade affects the viewer, comes through to them, attracts their attention and gets stuck in their memory.

Gineitytė demonstrates true mastery in selecting the motifs which become the engine of her paintings, be it a pale discus of the sun shining through a cloud or reflected in the water, or tickets frozen in ice (Frozen Tickets, 2012), etc. Several simple, but heavily schematised objects (a red rain drain pipe and the contour of a small bucket with blue water against an almost white background) suddenly create the mood of a sensuous celebration – that of a thawing snow or early spring. Gineitytė specialises in creating an extremely specific tearfully joyful mood. It seems that the artist works with the viewer’s longing and their sentiments.

This looks like yet another situation from childhood when our memory is not able to recall precise details of the environment any more, but we clearly remember that feeling from back then. The space is full of anxiety, but not fearful at all. 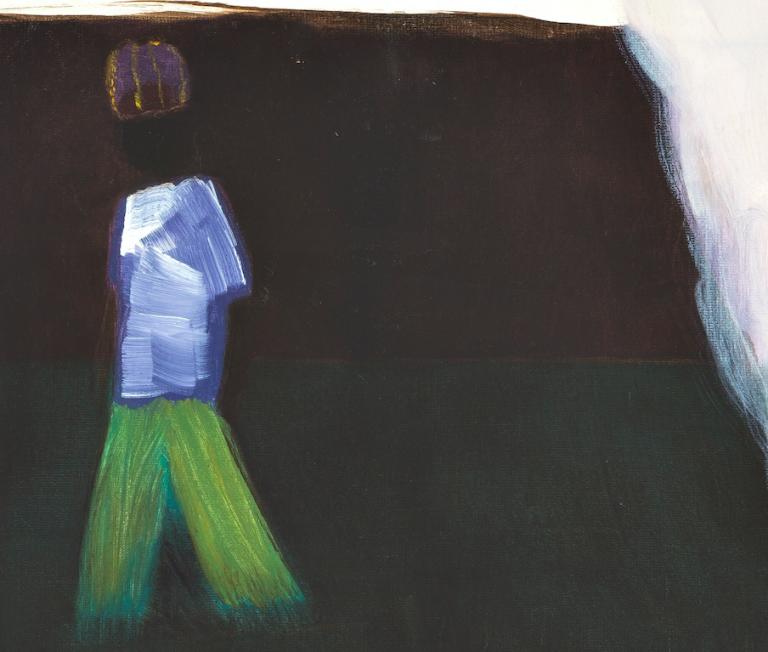 Her paintings based on the motif of her travels around Southern France are especially vivid, full of tidy lines of olive trees and sun-burnt colours. Her choice of colour is also specific. The artist combines only a couple of pale colours. Often, they are same tone colours that fade and distance the image, speak about our dreams and memories rather than our reality, if such a thing as reality actually exists. Nevertheless, reality manifests itself through time: days and natural cycles pass by and leave their trace (Day after Night,2017; Night Started at Noon, 2017). Childhood motifs also become elements of past cycles.

Gineitytė’s painting Lonely King reminds of childhood, the time when everybody still believed in kings, and not merely because of the painting’s title. The main character in the painting looks like a teenager who has found himself in a dark square or some other space with the horizon being the only thing visible in the distance. Is he a lonely king of a football pitch? Or the ruler of a kingdom that he himself invented? Next to him there is a white form descending from above. It looks like a snow hill, but it gets narrower at the bottom rather than at the top. One may only speculate whether the blue spot at the edge of the painting represents an azure swimming pool or something else. All these forms are generalised to the point where they function more like tools to create a certain mood rather than define a specific place of a situation. Something seems to be happening here: a lonely figure with its hands in its pockets is walking. This looks like yet another situation from childhood when our memory is not able to recall precise details of the environment any more, but we clearly remember that feeling from back then. The space is full of anxiety, but not fearful at all.

Gineitytė’s paintings ache with the continuous anticipation of spring or summer, remind of a suitcase waiting at the traveller’s side like a loyal dog (Newcomer, 2016), and about that miraculous feeling when a plane lifts off the ground or approaches it and lands after showing the travellers a web of forest paths intersecting at the seashore of Nida and visible only from above (Crossroad, 2017), and, certainly, about the forever sunny countries full of olive trees (Olive Trees, 2014) that we have once visited and continue to long for them ever since. Gineitytė’s Provence is one of these rare cases when faraway lands are not portrayed as a mere spectacular exotica. This hot land looks more like a Garden of Eden without a geographical denomination. This is why there are no humans there. That spot far behind the horizon where light and life exist in an intact primal perfection is a non-fulfilled place of our ache and longing. It might even be that it is possible to agree with winter there (Friend, 2007; Like Winter, 2011). I would guess that the lonely king is also longing for that secret land. 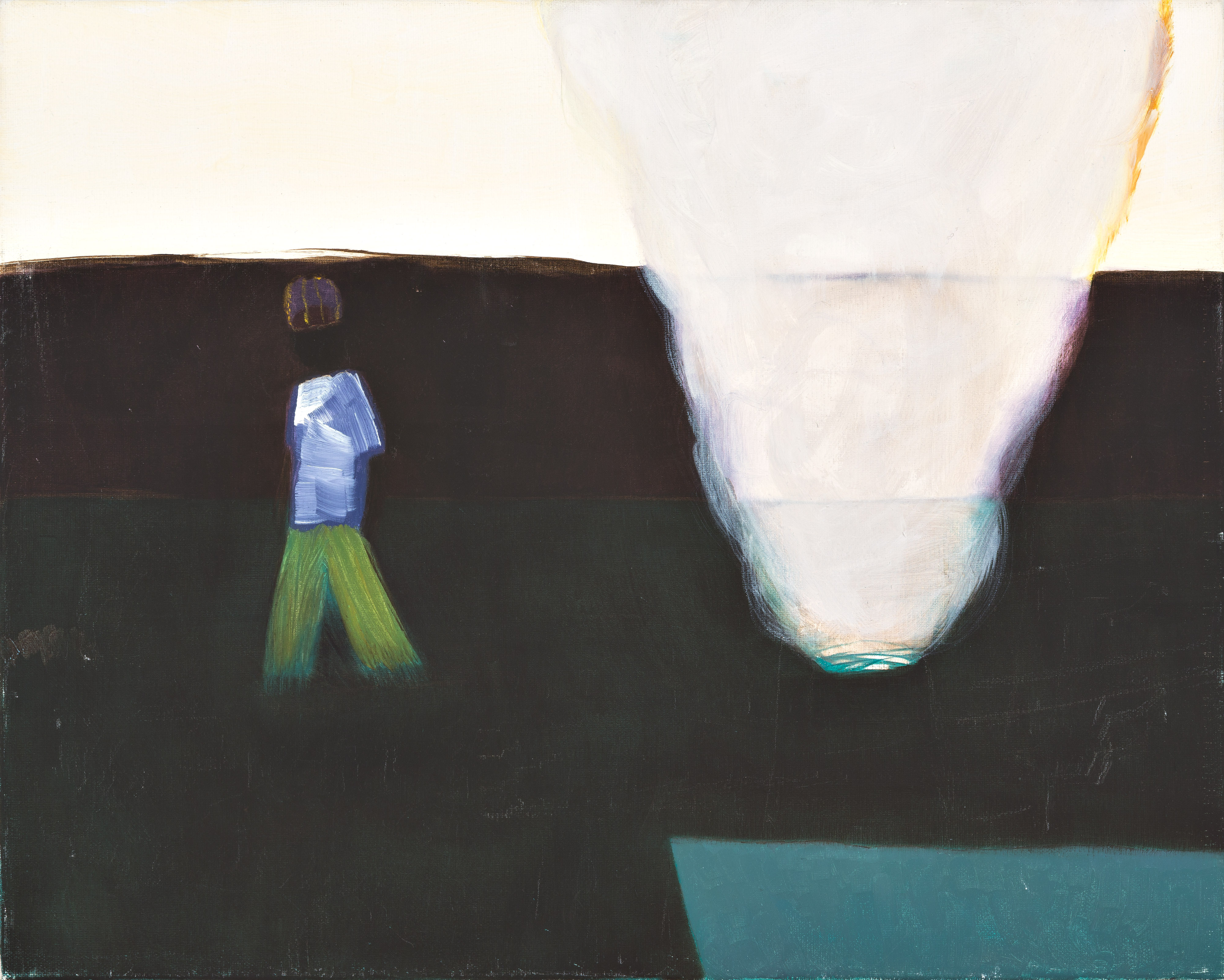