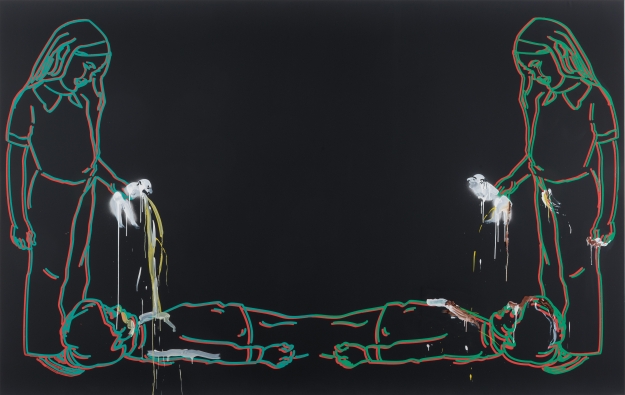 Tala Madani (b. 1981) is from Iran. At the age of 13, together with her mother, she moved to the USA, where she graduated from Yale University. She subsequently held a number of important exhibitions and as a result was noticed by influential art publications and event organisers. When Donald Trump passed the executive order referred to as the Muslim ban, Madani joined the exhibition of artists from Muslim countries which was held by the Museum of Modern Art. In other instances, the artist does not quite like being linked to the Persian tradition of art, even though at the same time she admits that the flatness characteristic of her works has something to do with it.

Most often the artist portrays a bald, middle-aged man (or a group of them). Her character is comically greedy, sensual and succumbing to baser instincts. However, when asked whether this is the artist’s response to Donald Trump or patriarchalism in general, Madani explains that it is her self-portrait rather than anything else. As a child, she would get up at four in the morning and, together with her grandfather, go to the park and walk around market places where she would watch her grandfather communicate with various tradesmen. She felt she was one of them. Since then Madani has admired the secret life of men. The limp old men are all down-to-earth and vulnerable, and do not represent any power at all. They are in fact comical, mundane characters who have lost their power.

When talking about her creative endeavours, the artist puts it all in a very clear manner. Her posts on the topic are available on the internet. She often uses words such as power, force, energy, and action. When describing images, words such as conflict, aggression and consequence pop up. However, it seems that Madani is attracted by the type of action the motivation for which is difficult to describe in words. She deliberately denounces the usage of language in her works, again because of the power game (English as the language of power and Farsi as the language of the marginal), and uses images instead. She chooses to go into the fields where the usage of words feels uncomfortable: sexual education, male intimacy, gastronomic greediness, etc.

The artist is interested in humour not as a way of making others laugh, but as a type of energy which comes out of a human being and by doing so empties space for something else. 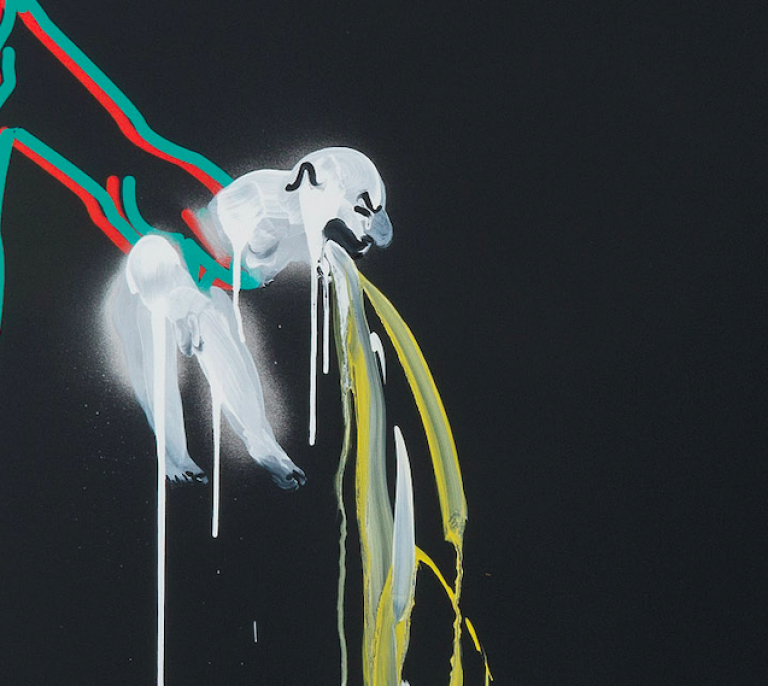 Before starting on a new painting she draws extensively, because drawing feels closest to the subconsciousness and the consciousness. Since 2007 Madani has been creating animation with the help of painting paraphernalia. When motion is introduced, the narrative becomes even more important.  And the narrative almost always relies on humour. The artist is interested in humour not as a way of making others laugh, but as a type of energy which comes out of a human being and by doing so empties space for something else. Humour is a factor ensuring the flow of life and is an important manoeuvre in cases when you are working on phenomena that are difficult to describe.

The unpleasant bald man is present also in Madani’s work 3D Squeeze. In this painting he is difficult to notice, because all that you see first is a girl with a sponge in her hand standing above the head of a boy lying down. It is a mirror image and it seems that the action is taking place in front of a mirror. However, the reflection is not identical, but lags behind a couple of seconds in time. The figures are drawn by using a double-line contour. The indescribable shade of green and the adjacent red create an optical embossment effect. While your eyes are working on the complex composition, it may go unnoticed that the ‘sponge’in the hand of the girl is that same middle-aged man. When squeezed, one of them starts urinating and the other one in the reflection starts vomiting.

The girl behaves badly in two instances. She bespatters the lying boy (wasn’t it women who were lying in paintings throughout the entire history of art?) and wrongs the middle-aged men. Still, there is no explicit feeling of wrongdoing here, and I will not try to explain why, but I think that the answer to the question lies in the context of images that surround us, where girls often end up being victims rather than aggressors. Those who have two children or were one of the two themselves know perfectly well that everybody will get their share because of the law of cause and effect which is aptly illustrated in the relationship between children.

The moment of revenge taken by the girl might cause different reactions in different viewers, but it seems that together with aggression (the bespattering might even look funny) the girl let something else go out of her, too. Most probably her mother will not praise her for this behaviour, but Madani herself would not advise her students to create art that looks admirable to their parents. 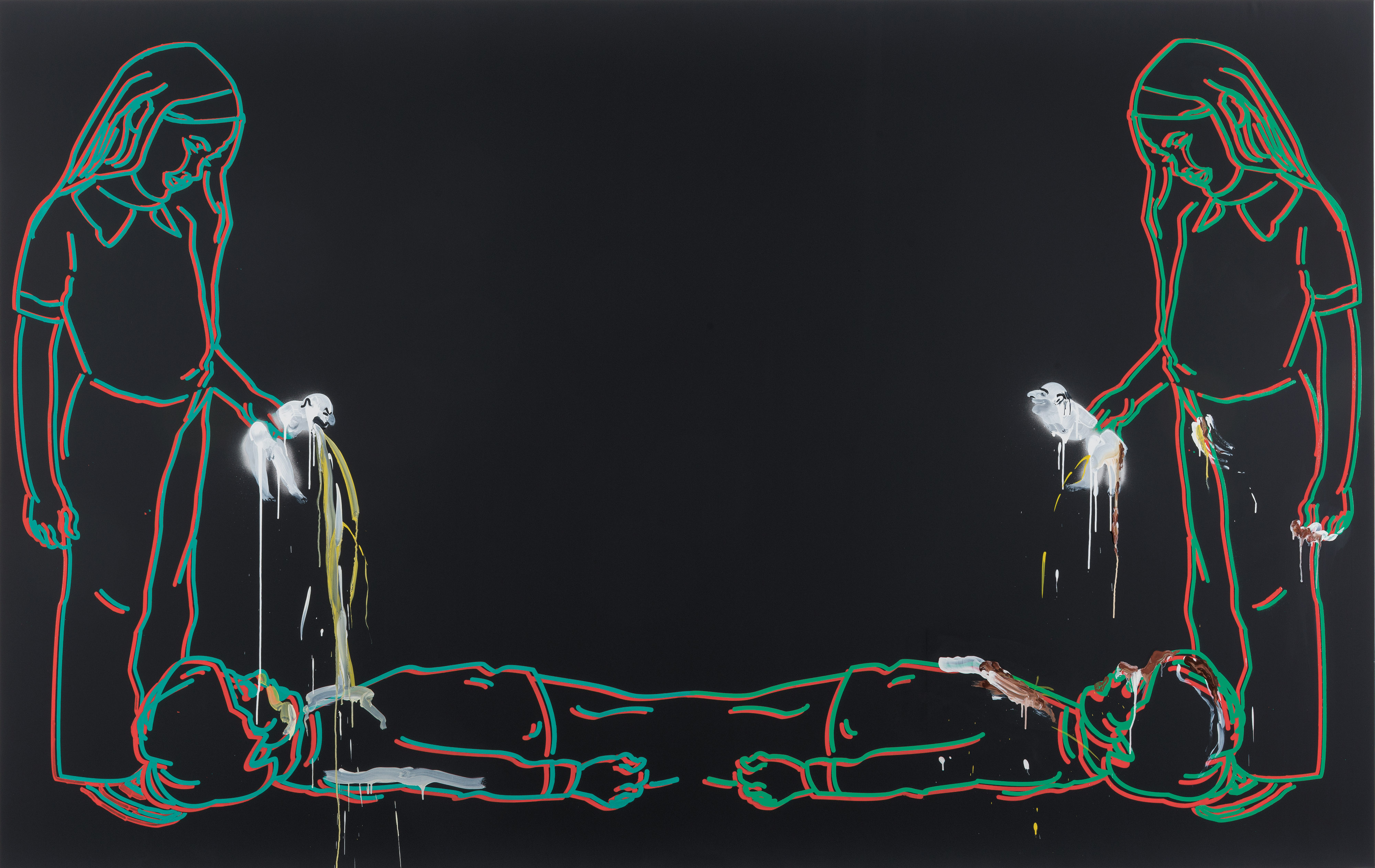