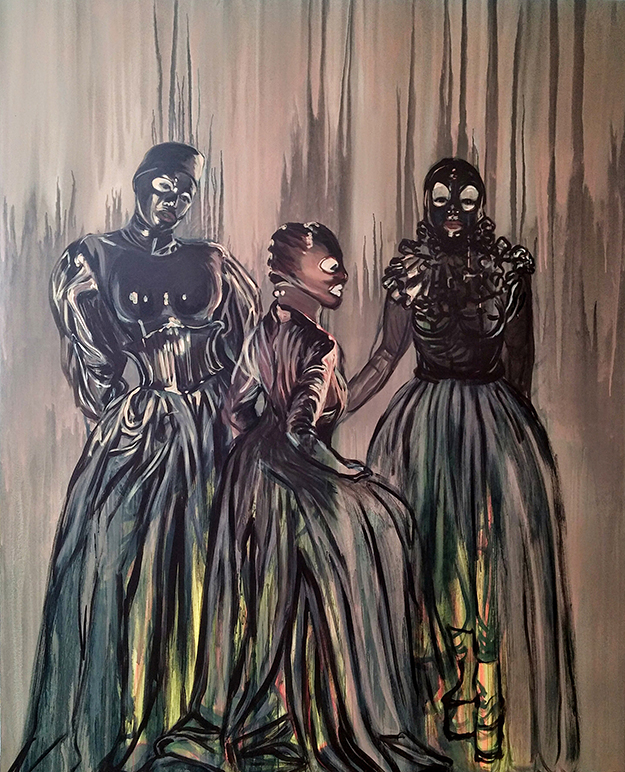 A spectacular costume is not the usual everyday apparel that feels familiar down to the smallest detail, it is also a role.

Beauty as a mask

Those who do not dress up every day may feel trapped wearing an elaborate outfit: they will feel squeezed, have difficulty bending forward or find it impossible to use the toilet. A spectacular costume is not the usual everyday apparel that feels familiar down to the smallest detail, it is also a role. And every role means an even bigger trail of inconveniences (and, most probably, privileges) which might be difficult to foresee. Let us imagine a temptress, a femme fatale balancing on extremely high heels, wearing a corset and wafting into an adventure of her life followed by a sea of photoflashes. Usually nothing fateful happens and after she appears in public, some of her images circulate around in public space where an army of hyenas is waiting at their keyboards and saying things that should not reach the ears of any living being. Even if you do not read it all, even if you do not want to know it and you do not care, you feel uncomfortable when such images become hostages of other worlds. In cases like these the American Indians who used to avoid photo cameras and believed that creating photo images fractures a person’s soul do not seem that funny anymore.

Many of the people portrayed by Claire Tabouret (b. 1981), an artist of French origin who settled down in Los Angeles, seem to be trapped in their clothes. Folds of their apparel turn into a swamp-like mass or jelly. The costumes enchaining their small and big bodies fail to express the people trapped in them, but on the contrary hide, level and almost eat them up alive. Most often Tabouret uses acrylic paint (seemingly less swampy compared to oil paint) and creates large-scale paintings. In her artwork she portrays scenes from small group photographs after changing them to her liking. Groups of people from children’s proms, participants of various celebrations or teams of young girls stand in semicircles or other compositions so typical for photography studios. Often the people portrayed are dressed in identical clothes. The homogeneity turns into a mass and the mass turns into an uncontrollable force. Individual portraits of girls and women painted by Tabouret create the same effect: lipstick, eyeshadows and mascara are used to create the impression of a mask that is blurred and possesses a certain power, which does not accentuate but rather covers and intercepts the image to its own advantage. 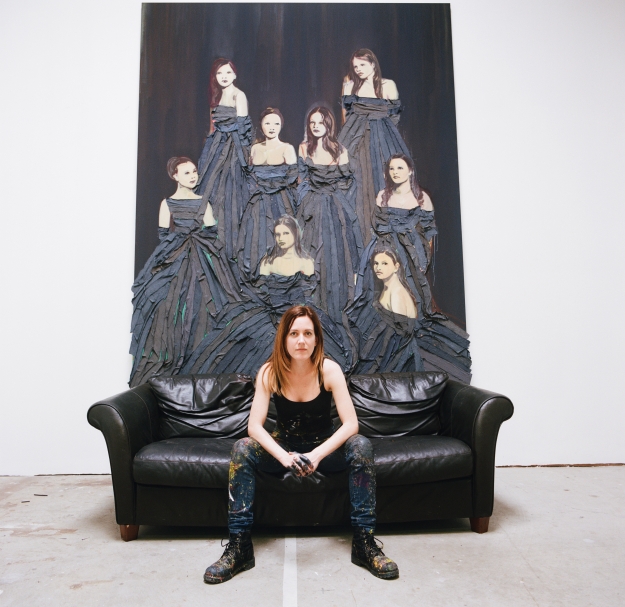 Many of the people portrayed by Claire Tabouret (b. 1981), an artist of French origin who settled down in Los Angeles, seem to be trapped in their clothes.

The artist seems to be talking about all the failures that cheap mass media mocks and thrives on. ‘What would you say about this neckline?’, ‘Doesn’t this dress look like a cabbage?’, ‘Is this make-up or a Halloween mask?’However, the images painted by Tabouret do not cause even a friendly laugh in the viewers despite the artist making it overly clear that ‘something is wrong here’, because her artwork touches upon a much wider phenomenon: domination of the image culture and drowning of an individual in the ocean of looks created by the entire beauty empire. The main culprit here is not business with its supermachine of consumerism. It appears that the most dangerous annihilator of uniqueness is made of absolutely innocent things: dreams, lust and desire to be noticed. This is easy to experience on a summer weekend in Trakai, where you can meet a princess bride on every corner.

We can only anticipate that there are living people behind the folds and stretched fabric. We have absolutely no idea how the three characters feel.

Tabouret’s work The Three Masks(2015) is a transitional version between a group portrait and an individual portrait. Three persons (women, we may say, even though we cannot be absolutely sure) in black a la immemorial dresses. The fabric they are made of has a fetish latex gloss. The impression is further intensified by the sadomazo masks on the faces of the three characters.

We can only anticipate that there are living people behind the folds and stretched fabric. We have absolutely no idea how the three characters feel. Two of them are looking at us as if asking for something. What puts you off most in communicating with a person in a mask is that it is impossible to understand your interrelationship with them, be it an officer from the special force or a stork at a Mardi Gras carnival.

The Three Masks do not take us to the macabre world of erotica, even though some viewers might find their way there though this painting. Tabouret is not telling about the history of the costume either. The costume set is eclectic, made of a collection of articles from different periods in time and bearing different meanings. In all probability, the image of the three figures shows a mismatch between the spectacle and the vision, and only fantasy can put the final touch to every role. In a play a wooden stick may turn into a horse, but in a picture it still remains a stick. The same could be said about the sadomazo ‘countesses’: they seem to be persons in disguise caught in an awkward moment rather than countesses who suddenly came to life.  After the magic of a themed event or a celebration that evens out all the mismatches fades away, the only thing that remains is a naked image with a protruding human touch. 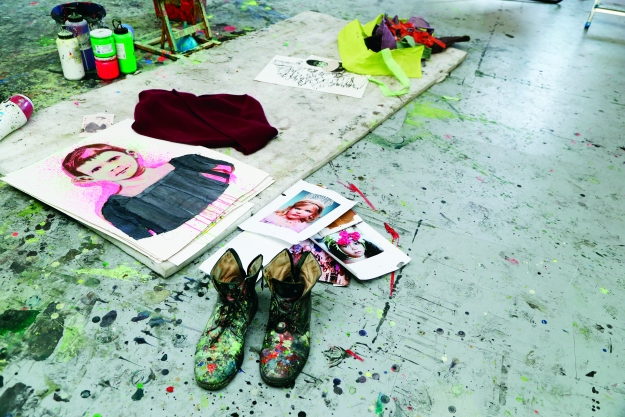 What is this piece of artwork about? About a mismatch between the image that we see portrayed in a painting and the image in our head, and about convergence resulting from our willingness to be unique.

What is this piece of artwork about? About a mismatch between the image that we see portrayed in a painting and the image in our head, and about convergence resulting from our willingness to be unique. It is about the image culture as a fabric with the effect of a web and about the tiring question ‘what to look like’. It is about the fact that we no longer know what we are and how to be. It is about the fact that all of it is just a mist. Here art unfolds as a means to be disturbed rather than as an amusement of an abounding world, because it is not possible to create a relationship, especially a close relationship with anyone, and this is especially true about the relationship with ourselves, if we decide to keep a safe distance.