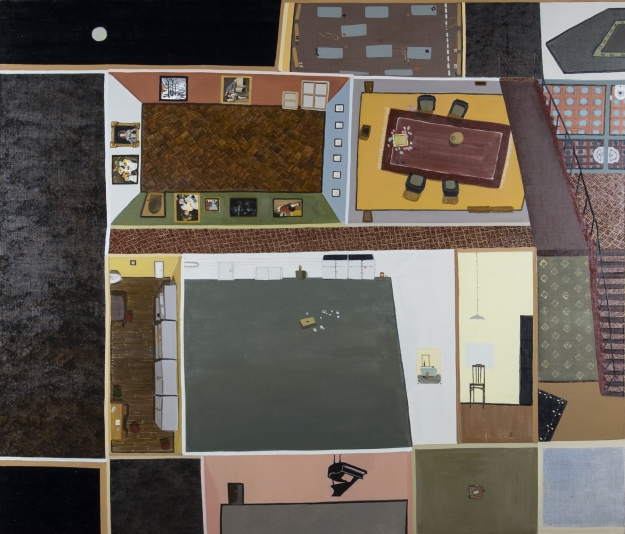 Painter Vita Opolskytė (b. 1992) graduated from Vilnius Justinas Vienožinskis Art School, Charlemagne University College in Antwerp, Belgium, and Vilnius Academy of Arts. She has tried a number of very different education systems. In spite of her young age Opolskytė is already distinguished as a unique artist. She has participated in exhibitions both in Lithuania and abroad since 2014, and in 2015 she won second prize in a competition of young painters.

Does school develop and motivate students, or does it rather put down and even break individuality? What influence do educational institutions have on the mentality and creativity of artists? Is formal education always a positive thing? These are questions that come to mind when interpreting Vita Opolskytė’s diptych Educational Scheme which, bizarrely, reminds of emergency evacuation plans in public buildings. The paintings are made in topographic style –purportedly from strictly above. But inside the picture this style of depiction is interrupted –perspectives become distorted, scale is liberally skewed. ‘Each room in such buildings is a system in itself and symbolises different educational or science institutions which I happened to experience. A generalised complex of such institutions would make an institution of its own,’the artist said. It that case, her painting is a metaphor for ‘evacuation from education’. As can be expected of a young artist, she questions her learning experience by searching for a unique way of expression and seeking to shed the imprint and influences left by educational institutions.

It seems as if we are encountering an especially intellectual painter here who theorises about her visualisations. She refers to Ludwig Wittgenstein’s certainty analysis, Michael Foucault’s power and discipline and Sigmund Freud’s repressed memory theories to develop her pictures.‘Learning is like a game based on rules. You do not question but accept what your teacher says. What remains beyond the margins is how much the teacher is sure of this knowledge, how much it is tested by truth. As soon as they master the game of education, students gobble the information provided that it is not cleared from possible doubts,’Wittgenstein posits. 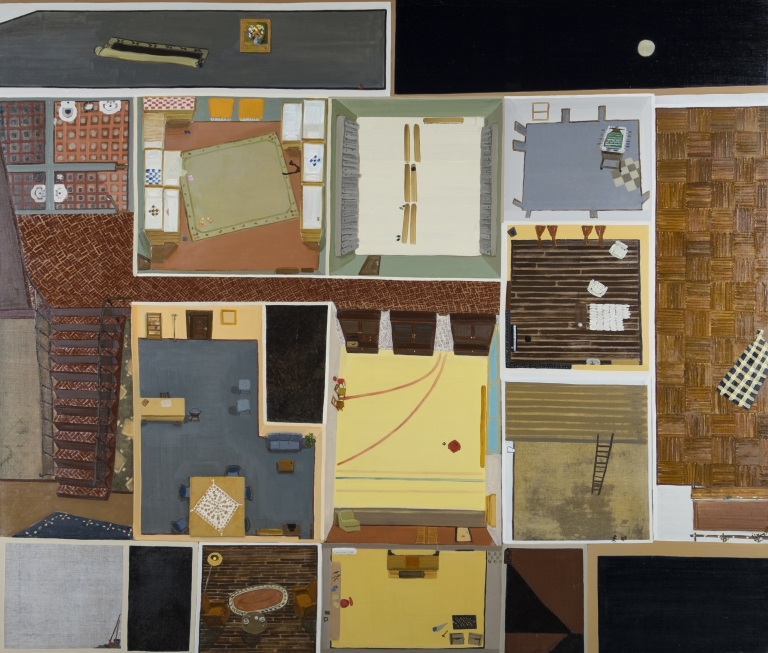 Having committed her memories of the institutions to the diptych the artist arguably rigs the game in her favour –institutions become less central, less integral and somewhat dysfunctional. Thus the ‘ceiling’for the truth is lifted and the basis for other floors is demolished. ‘The picture argues that uncertainties arising in the process of formal education which feeds its students cut-and-dry truths infringes on the self-confidence of human beings,’the painter said.

The rooms are painted in a primitive manner, as if it were a child’s drawing; no passages between rooms and spaces, staircases lead to nowhere and observers can also see paintings on the walls –which would be impossible in a topographic map. This is not the only reference to childhood, however. In other, non-topographic paintings by Opolskytė the interior remains important. It often accommodates figures painted from photographs. She also playfully distorts scale and perspectives in these paintings. Figures defy conventional reason, oftentimes they are too small or too big for their environment, with lots of symbolism referring to childhood. All this begs to mention the Alice in Wonderland syndrome –a deliberate decision by the artist to introduce a blend of reality and fantasies to her works. All you need to do is imagine that your hands grow incredibly long as you go to sleep while the furniture in the room contracts to the size of toys. Such distortions in perception is an innocuous neurological condition frequent in children. The syndrome affects not only visual but also sonic, sensual perceptions as well as how children conceive of their own body.

By stimulating the symptoms of the syndrome Opolskytė creates her artistic warped spaces, bringing the observer back to the world of childhood memories where reality and fairy tales perfectly coexist. These calculated distortions of proportions and scale are a premeditated attempt to create surrealistic impressions to reach the child within. Thus she brings about an illusion of parallel perception, reawakens dormant layers of psyche. The observer is deliberately misled in these spaces; they are made to lose their grip between the realistic and the alternated realities, reasonable and fantasy-captivated narratives. In this environment the question of whether it is more a surreal reality or rather a fancy with fragments of reality has no sensible answer.

In Opolskytė’s works surrealism (a moderate version of André Breton, to be precise) is blurred with vintage, her love for the old-fashioned; like other painters of this trend, she is particularly fond of furniture, interiors and things that are made to look aged. A classic source of surrealistic iconography is a flea market where irrelevant phenomena rediscover their place in a marginal space. This propensity of Opolskytė for aging things affects the colours of the paintings: they are subdued, as if filtered through the screen of light grey or light brown. Everything looks faded as in vintage photos. This makes Vita Opolskytėsignificant not only as a resurrector of figurative and conceptual narrative but also as a subtle master of colour. 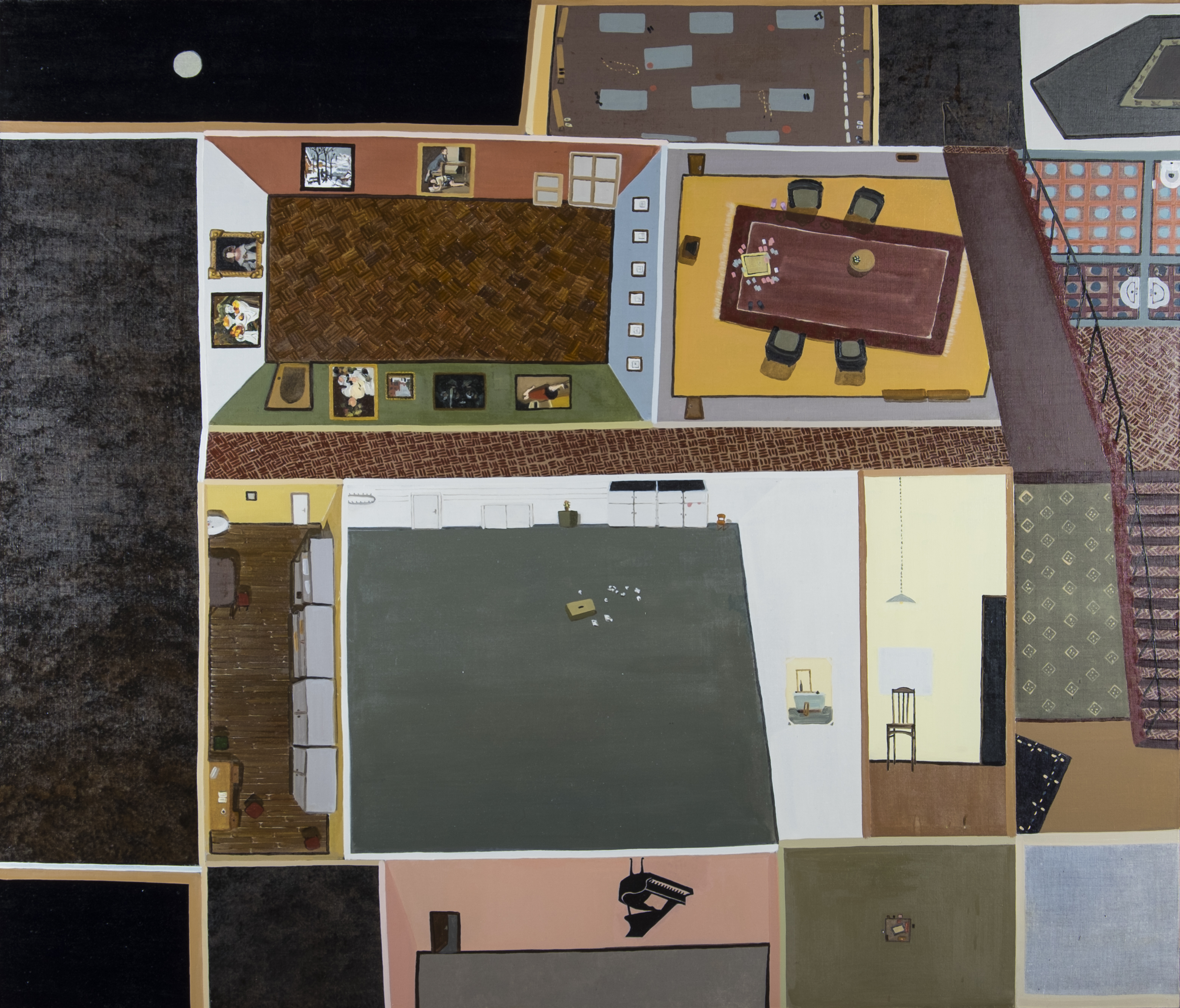