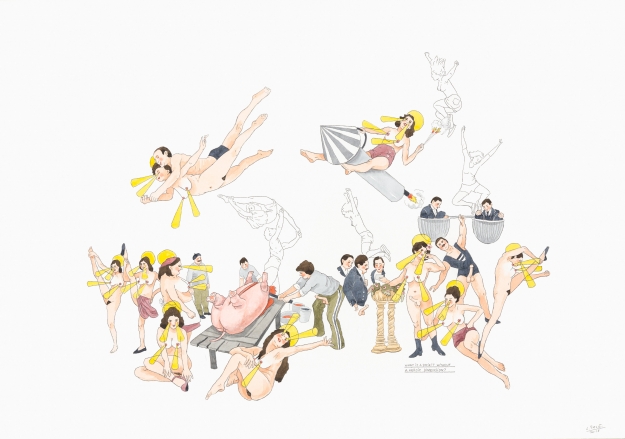 Laisvydė Šalčiūtė has titled her new series of works (Melo)dramas, putting the first part in brackets in order to emphasise melo, which means ‘of deceit’ in Lithuanian. The series demonstrates the artist’s critical relation with ‘pop’ melodrama, which, according to her, has developed into the main (lifestyle) genre of the consumer society. This is all about us who are sitting glued to the TV screen and are mad about perfecting our bodies, not shrinking from sentimentality and experiencing a ‘surplus of emotions’. Šalčiūtė has labelled this contradictory status of ‘screen memory’ as post sensuality and has conceived an ‘ironic fictitious theory’ made of text and images to substantiate the concept. The artist uses methods such as bricolage, diary and melodrama for that purpose.

Bricolage is a creation or construction of artwork from a diverse range of readymade cultural products. Most artists are likely to use diary as a method, but melodrama as a creative strategy is unique to Šalčiūtė. Here several cultural layers coalesce. First of all, it is the genre of melodrama as such, which refers to femininity, sentimentality and superfluity. Next come manipulations with the female body, especially female skin, as seen in the movies. Here the artist relies on the idea of Thomas Elsaesser and Malte Hagener who say that ‘women’s skin is more of a surface that can be used as a movable aperture or window to be regarded: the site of display for jewellery and necklaces, female skin is the canvas on which endless dramas of hiding and revealing, of self-exposure and modesty, of presentation and shame or veiled allure and absolute vulnerability are played out and staged.’

"Fantasies keep my imaginary world alive. The method that I use to examine the (melo)dramatic nature of my own environment is in part an imitation of the (melo)drama that operates in my own consciousness." 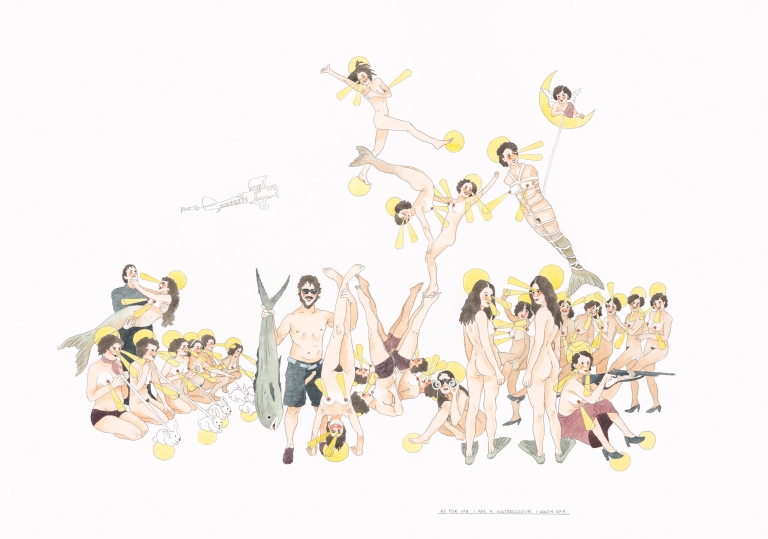 Third, for Šalčiūtė this kind of approach is an opportunity to ‘slough off her skin and try on that of somebody else’ and thus observe her own sensuality and that of the world’s from a distance:  ‘Fantasies keep my imaginary world alive. The method that I use to examine the (melo)dramatic nature of my own environment is in part an imitation of the (melo)drama that operates in my own consciousness.’ She is part of Guy Debord’s society where ‘the specialisation of images of the world is completed in the world of autonomous image, where the liar has lied to himself.’

She seems to reincarnate into her character Melusina, whose whole body screams it all out by frantically dancing even when showered with axes or swinging on swings. There is a halo above her head;her eyes and breasts radiate powerful beams of light to examine and plough through the bluish black uncertainty and to pull out of this uncertainty swans, rabbits, deer, female bodies, stereotypical commercial slogans, precepts from mass media or scientific claims that keep bubbling in the melting pot of the internet culture. 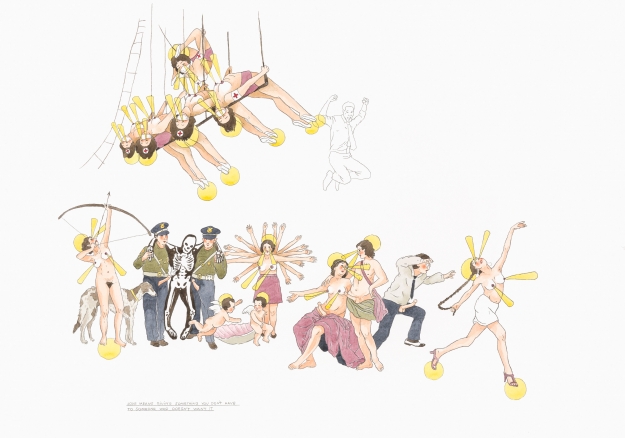 The sublime, he thought, stemmed from man’s ability to sublimate his libido into the process of creation and contemplation, whereas women were ‘incapable’ of it and thus all they could do was ponce about, charm and lure.

In one of her works Šalčiūtė quotes from A Philosophical Enquiry into the Origin of Our Ideas of the Sublime and Beautiful by Edmund Burke who wrote it to understand why some objects calm us down whereas others cause tension. He related the calming ones with loving passion and attributed them to the domain of beauty. Meanwhile, he considered sublime objects to be infinite and causing fear. Burke juxtaposed the sublime, which he referred to as ‘male’ experience, to the decorative, soft and sentimental – thus ‘female’ – beauty.  The sublime, he thought, stemmed from man’s ability to sublimate his libido into the process of creation and contemplation, whereas women were‘incapable’ of it and thus all they could do was ponce about, charm and lure. Melusina knows all about it, because she is also a swan, although an empty one and lacking something. Still, she strips, internalises all these expressions of hysteria that she finds in visual culture and probes the ‘torment for the sake of beauty’ with her own body. The next moment she sneers at the gaze she returns and burns it with her teary limelight-like eyes. 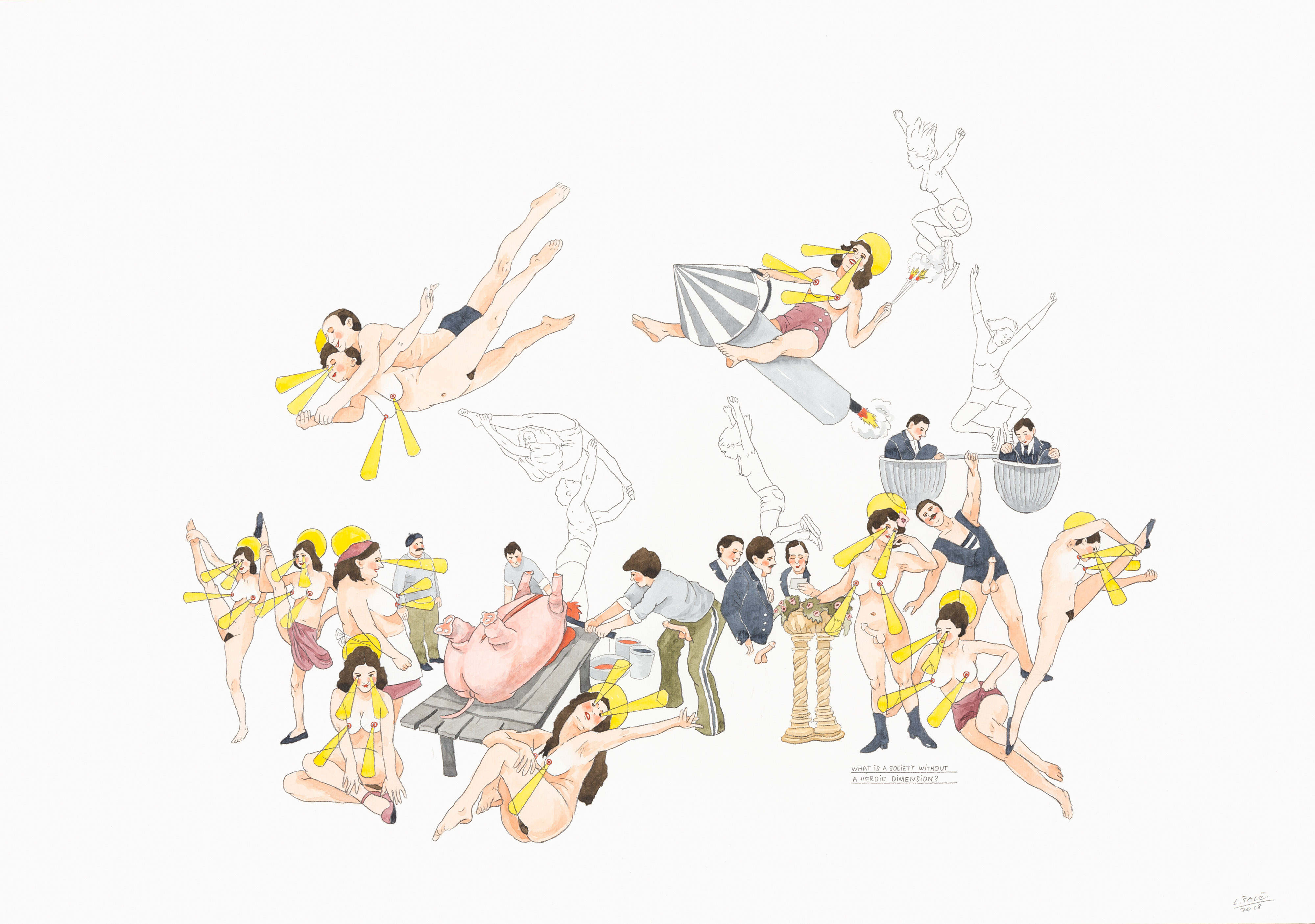