On 12 May at the Vytautas Kasiulis Art Museum (A. Goštauto 1, Vilnius) the exhibition of works by Viktoras Petravičius "Creation Coordinates" will open. This is the sixth anniversary solo exhibition of Petravičius’ works to be organised in Lithuania. Aside from the artist’s works kept in Lithuania’s museums that dominated in the earlier shows, this time the aim has been to show the public as many unseen works from private collections or pieces the artist once gave to individuals. 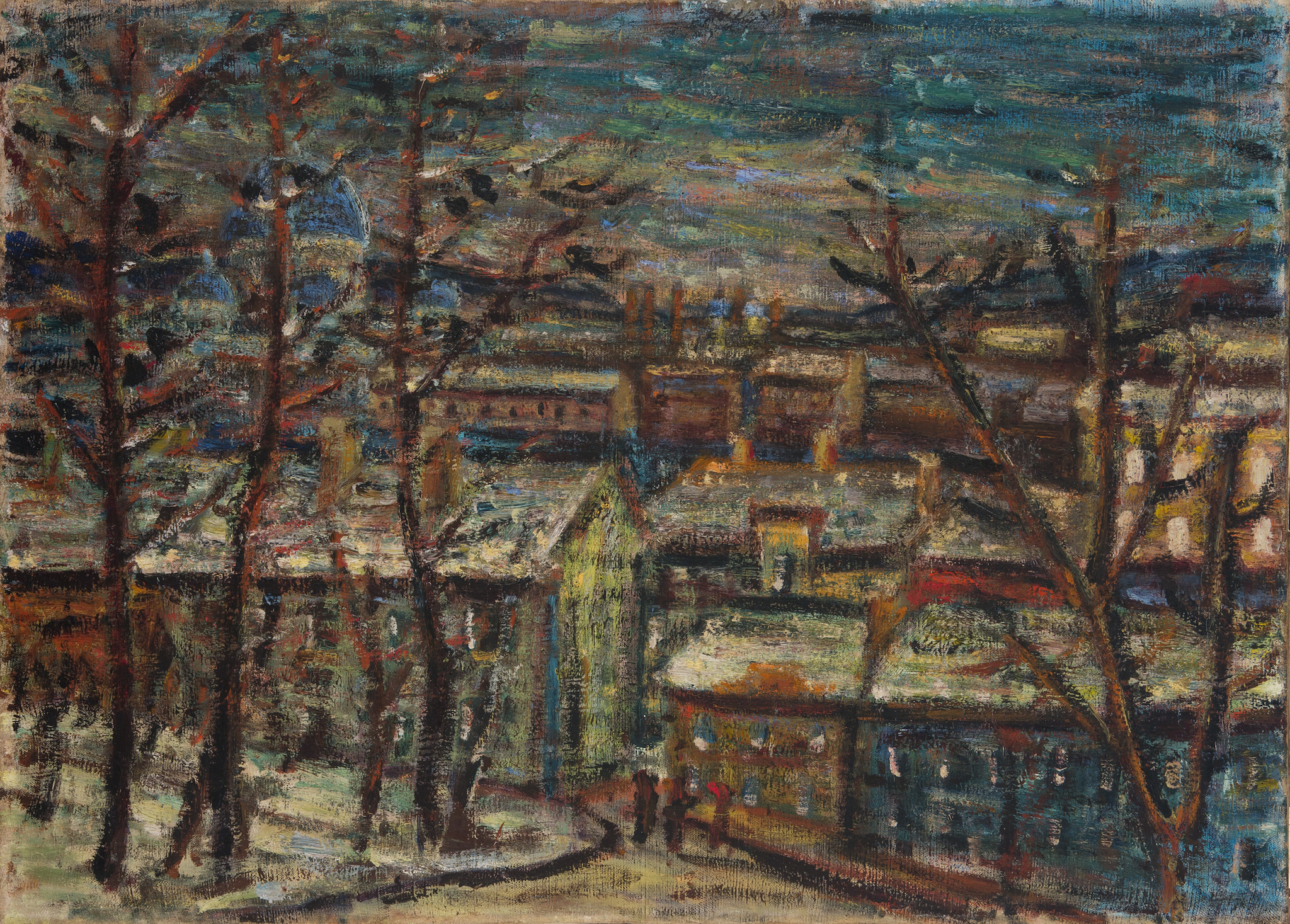 The work of Viktoras Petravičius (1906–1989) reflects one of the highest points in 20th-century Lithuanian graphic art. The artist has uniquely embodied the goal of interwar Lithuanian art to harness the deep folk art traditions to foster a new art expressing the spirit of the times. These objectives started forming whilst Petravičius was still a student at the Kaunas Art School’s graphic art studio headed by Adomas Galdikas. Encouraging his students to be open to Western art innovations, Galdikas imparted a more modern concept of folk artistry.

The early prints by Petravičius, like his co-students, were characterised by Lithuanian rural village themes, the familiar peasant images from his childhood. At art school the talented youth did not have much luck with academic still life drawing; he wanted, as he said on many occasions, to create images of the worlds known only to him. Immediately after he graduated, an image from those many worlds entered his graphic art works – a scene depicting a procession of strange old men, women carrying ritual wreaths up high and young men blowing horns. The motif of rhythmical walking will also be repeated later in Petravičius’ works. After graduating from art school, the determined young man pursued art studies in Paris. At the time, as he said himself, he no longer felt like a student, but like a freelance creator “with his own line”. This graphic artist’s unique line rapidly developed while in Paris, the authenticity of a rough drawing and a spontaneous expression of his imagination coincided with the stylistics of expressionism and its modernist branch, primitivism, alive in so many forms at the École de Paris. During his Paris period, Petravičius created his most famous interwar works – illustrations from the Lithuanian folk fables "Gulbė, karaliaus pati" (Swan, wife of the king, 1937) and "Marti iš jaujos" (The bride from the barn, 1938). They immediately occupied an important position in the evolution of Lithuanian book art. Upon the author’s own recommendation, Gulbė, karaliaus pati was released by the respected bibliophile Society of 27 Book Lovers (XXVII knygos mėgėjai) and exhibited with their other releases at the International Expo of Art and Technology held in Paris in 1937. The book won the Grand Prix in the printed art category.

Folklore is the source of Petravičius’ deepest innate creative impulses. The theme of love between a man and a woman and marriage is developed in story format in both illustration cycles. The motif of an extraordinary marriage, an account about magical totemic origins, or simply an other-worldly wife are supplemented with content that only appeared later. The strong sub-conscious link between pagan and Christian culture, so typical of Petravičius, was crystallised in his Marti iš jaujos, a sacred relationship with the world that determined the unmistakeable uniqueness and force of the artist’s elemental work. The symbolic images from Petravičius’ illustrations are based on cultural archetypes. He was the first one to so powerfully move the archaic national cultural code in Lithuanian graphic art, and intuitively created images harnessing the similarities between man and nature, brought alive from the nation’s mythological memory. The primitive view is reminiscent of the secretive ritual mood of his works, the almost pantheist comprehension of the world, or even outright erotica.

In the 1930s–1960s, Petravičius illustrated books by Lithuanian writers including Sofija Kymantaitė-Čiurlionienė, Faustas Kirša, Liūnė Janušytė, Balys Sruoga and Antanas Rūkas. Some illustrations are marked by Petravičius’ characteristic expressionist manner. The illustrations from Janušytė’s satirical novel Korektūros klaida (Correction error) are particular highlights. Firstly they are interesting in that the novel’s characters are depicted as young Lithuanian artists who were living in Paris at the time – Paulius Augius-Augustinavičius, Petravičius, Juozas Miltinis and of course, Liūnė Janušytė herself. As in the novel’s text, so too in the illustrations, there is no shortage of humour, comedy and satire, something that is very rare in Petravičius’ graphic art generally.

World War Two, and the fact that as it drew to an end Petravičius was forced to flee Lithuania, truly interrupted his creative plans. Finding himself in West Germany, the loss of his homeland was a painful experience to endure. He depicted the meandering moments of refugee life, and making use of romantic national history and folklore images and Christian symbols, he paid homage to his homeland, mourning its tragic fate. At the time his work also incorporated lyrical memories and dour impressions of being in exile.

The graphic art of Petravičius from this period saw a deeper divide created between directly recording everyday life scenes, and an elevated poetic vision. Longing for stability and the warmth of a cosy home, the artist produced several linocuts depicting the simple life of refugees. Some of them are scattered compositions, characterised by a nervous chaotic stroke, appearing to share with viewers the author’s state of disarray and hopelessness. The chance to illustrate the collection of Lithuanian folk songs Dainos / Vieux Chants Lituaniens compiled by Gražina Krivickienė in 1948 and released in Freiburg im Breisgau proved to be real spiritual boost for the artist. Compared to earlier fable illustrations, here the relationship between man and woman changed, as did the spheres of their activity and communication. In the interwar period, this was primarily an erotic sphere driven by innate instincts, whereas under the conditions of the war epoch’s painful transitions, greater significance was placed on living in a particular society and the battle field.

In 1949 Petravičius emigrated to the United States of America with his family and settled in Chicago. As for the majority of Lithuanian emigrants, he did not find it easy to settle in this foreign land. He was forced to take on various kinds of physical work, leaving little time for creativity. Only in the 1950s did Petravičius land a job closer to his artistic profession. He worked in several of Chicago’s stained glass workshops and created mosaics depicting religious themes. Usually these were demand-driven commission pieces. In 1961, following a long silence, in his first exhibition on the other side of the Atlantic, Petravičius spoke out in a voice of contrasting black and white flattened shapes. The war-time experiences drew away, the pain aroused from his losses gradually subsided.

Gradually changing and reviving itself in terms of its plastic form, Petravičius’ graphic art is essentially uniform in nature. The contraposition of man and woman, their eternal contradictory bond, the idea of love, woman as the symbol of continuation of life, fertility and motherhood seeps into the artist’s works in various subjects and periods, opening itself up to national and universal meanings. Variations and “montages” from separate motifs became important principles of composition in Petravičius’ works. His mixed execution technique of variously coloured prints cannot quite be called monotypical, as these are not one-off prints.

In 1978 the Petravičius family bought a small rural property in Union Pier in Michigan State. Moving out of Chicago and leaving the draining city routine behind, he found himself surrounded by nature and the artist, now in his 70s, experienced an enormous creative drive. He introduced Baltic gods onto the shores of Lake Michigan, along with totemic bulls and birds. The large, usually vertical monumental tectonic, multi-voiced and multi-meaning compositions that embodied the constant vital movement, space and eternity of time were determined by the creative spirit alive in Petravičius in the 1970s and especially the 1980s. Over time, colour, usually quiet and transparent, appeared in Petravičius’ graphic art. At the beginning of the 1970s he created sculptures featuring an expressive, rough surface, created from wood and concrete. These sculptures, piercing the space with their sharp silhouettes, often, as in his graphic art, they were polychromatic.

The exhibition will run until 4 September, 2016