For the 58th International Art Exhibition - La Biennale di Venezia (Venice, Italy), the Lithuanian pavilion will transform into an artificially lit, everyday beach. This will be the stage of the contemporary opera-performance "Sun & Sea (Marina)", by Rugilė Barzdžiukaitė, Vaiva Grainytė and Lina Lapelytė. The Lewben Art Foundation became one of the main sponsors of the Lithuanian pavilion. 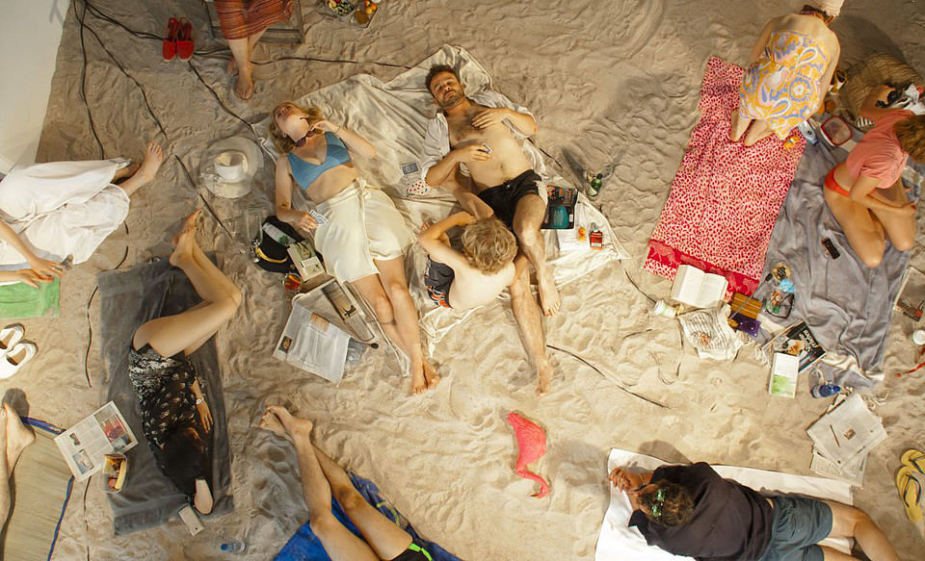 Viewing the performance from above, the audience will encounter the main characters of Sun & Sea (Marina) - a modern society of holiday-goers in colorful bathing suits - lying down on the sandy floor. In the libretto, their thoughts unfold casually, easily. In their solos, actors sing about real-life troubles, happy moments, the everyday; the composition of sunscreen, a morning plan to make an omelet. Meanwhile, social and environmental crises and collapses emerge, as though from the depths of the characters’ consciousness.

Rugilė Barzdžiukaitė (b.1983) works as film and theatre director. Her favorite creative strategies include the exploration of the tension between objective and imagined realities, and challenging anthropocentric way of thinking in a playful way. Her recent full-length film-essay Acid Forest was awarded at the Locarno International Film Festival this year and is currently touring in film festivals around the world.

Vaiva Grainytė (b.1984) is a writer, playwright, and poet. Her writer’s practice usually crosses boundaries of desk work and becomes an integral part of an interdisciplinary polylogue. Her latest collaborative works – the musical performance The Cuckoos (2018), the site-specific performance Lucky Lucy (2016) and the radio play Axis Deviation (2015), exhibit the features typical of her oeuvre: personal and collective memory, daily routine and social issues are in harmony with poetic, slightly absurd and surreal overtones. Her book of essays Peking Diaries was nominated for Book of the Year 2012 and shortlisted as one of the 12 most creative books in Lithuania.

Curator: Lucia Pietroiusti is Curator of General Ecology and Live Programmes at the Serpentine Galleries in London. She is the co-curator of The Shape of a Circle in the Mind of a Fish (with Filipa Ramos), a year-long symposium and research project on interspecies consciousness.

Rasa Antanavičiūtė is the initiator, developer and executive director of Nida Art Colony of Vilnius Academy of Arts.
Jean-Baptiste Joly is the founder, former head and art director of Akademie Schloss Solitude - the largest artist residency program in Germany.

Original version of Sun and Sea was produced by Neon Realism with the support of Akademie Schloss Solitude, Münchner Kammerspiele, Goethe-Institut, Dresden State Theatre.
Sun and Sea (Marina) at the 58th Venice Biennale of art is funded by the Arts council of Lithuania and produced by Nida Art colony with the support by the Ujazdowski Castle CCA, private funds and independent supporters.

New artwork in the collection – "The Monsters Inside" by Patrizio di Massimo Discussion "What Took You So Long? Women's Affairs”