On 25 to 28 June, at the international contemporary art fair ArtVilnius’15, taking place in the Lithuanian Exhibition and Congress Centre LITEXPO (Laisvės ave. 5, Vilnius), the Lewben Art Foundation will present to the public for the first time part of its collection of contemporary international artists. 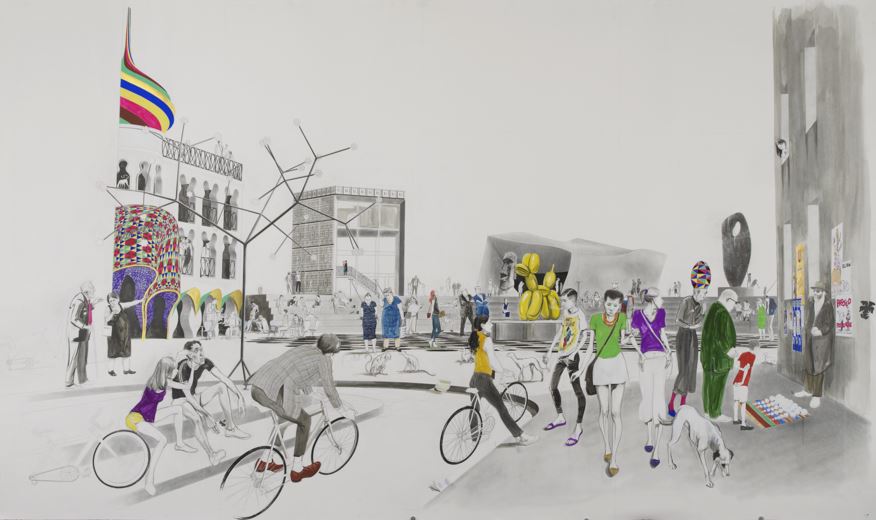 On 25 to 28 June, at the international contemporary art fair ArtVilnius’15, taking place in the Lithuanian Exhibition and Congress Centre LITEXPO (Laisvės ave. 5, Vilnius), the Lewben Art Foundation will present to the public for the first time part of its collection of contemporary international artists.

All nine artists on show in this exposition are recognised worldwide. Their works are held in major museum collections, such as MoMA and Tate, and exhibited at the most important biennials and events all over the world, such as Documenta.

Several years ago, Charles Avery (b. 1973, Scotland) started thinking about a new world, which he called The Islanders. Onomatopoeia is the city at the centre of the imaginary island, the Noumenons are animals that no hunter has yet been able to capture, the archipelago of Wittgenstein’s assiom is surrounded by the Analytical Ocean … The work on show is one of the three key works of the entire production of The Islanders. Markus Schinwald (b. 1973, Austria) buys prints and paintings by known and unknown artists from the Biedermeier movement (1815–1848), and on these portraits he paints features like masks and prostheses that transform the Romantic portrait into a disturbing or deformed face. Tala Madani (b. 1981, Iran), with her fresh aesthetic, shocks us with an explicitly sexual content, basically revealing our inner psyche. The exposition is supplemented by paintings by the group of artists called Los Carpinteros (formed 1991, Cuba). These artists are interested in the intersection between art and society: the group merges architecture, design and sculpture, in unexpected and often humorous ways.

The exposition will be supplemented by sculptures by world-famous artists. Tony Cragg (b. 1949, United Kingdom) is probably one of the best-known sculptors from the 1960s. In 1992, he said: ‘I see a material or an object as having a balloon of information around it’, and he explores this aura in different ways, with different materials. The second sculptor presented in the exposition is Thomas Houseago (b. 1972, United Kingdom), a link with art history: his sculptures make references to many Classical works of art. Masks are a central part of Houseago’s work, all with the mark of their maker. An important part of the exposition is Bertrand Lavier (b. 1949, France), who occupies a prominent place in the contemporary art world. The artist reveals all the stages of this transitivity between life and art, in order to instigate a reconsideration of the relationship between art and reality.

The viewer will also have an opportunity to see an installation by Jonathas de Andrade (b. 1982, Brazil). For de Andrade, anthropology, pedagogy, politics and morality are the basis for an exploration of the paradoxes of modern culture.

Periodically during the art fair ArtVilnius’15, there will be a performance by the violinist Kęstutis Pleita in the exposition of the Lewben Art Foundation: he will play compositions on a violin made from transformed guns by Pedro Reyes (b. 1972, Mexico). Disarm (Violin IX), 2014, belongs to the Disarm project. Reyes started it in 2013, after a similar project entitled Image, asking the Mexican government to give him about 6,700 weapons to transform into art.

The Lewben Art Foundation, founded by the Vilius Kavaliauskas Private Foundation, is a non-governmental organisation, which is part of the Lewben Group. Since 2013, the Lewben Art Foundation, managing a sizeable and representative collection of Lithuanian works of art from the 18th century to the present day, has turned its attention to international contemporary art, so that it can be assessed on a global level. Furthering relationships with the most active players in the art world is a key objective for the Lewben Art Foundation, in order to make the Lithuanian art scene known abroad, and to benefit from some of the most interesting research that the art world is conducting worldwide. This is why in 2014, Vilius Kavaliauskas, the Chairman of the Board, became a member of the Tate Modern REEAC Committee.