The exhibition "Jonas Rimša (1903–1978). The Magic of Fire and Jungle" opens at Vytautas Kasiulis Art Museum 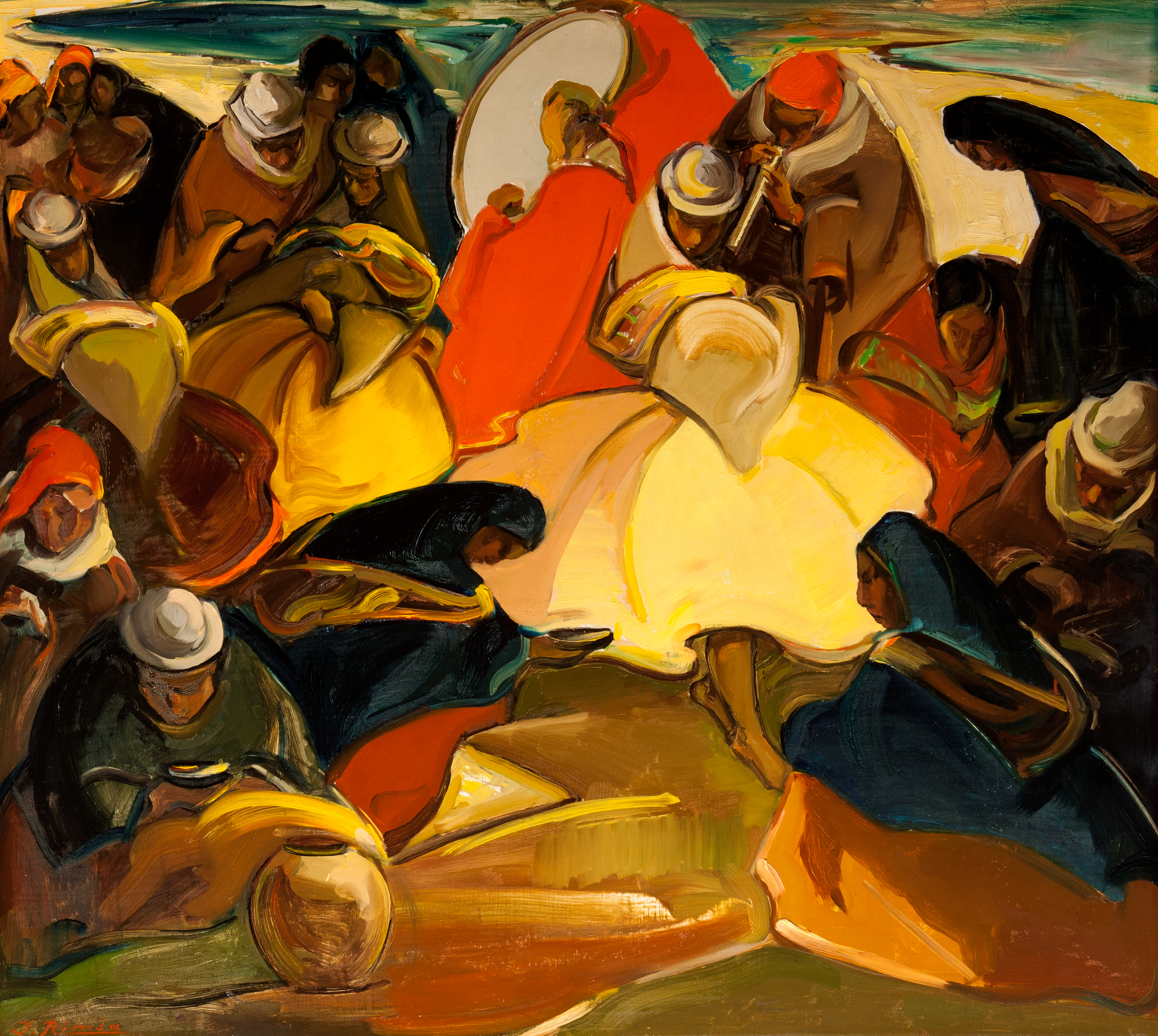 Jonas Rimša. Rhythm. From the Aymara Trilogy. III. Circa 1962

The presentation of the book "Jonas Rimša. Returning Home" is to be held at 5 p.m. on Tuesday, 24 February, 2015, at Vytautas Kasiulis Art Museum.

One of the most prominent Lithuanian-born artists who spread Lithuania‘s name abroad, Jonas Rimša (1903–1978) returned to Lithuania by courtesy of private collections. This is the fourth exhibition of Jonas Rimša‘s works at Lithuanian museums. The first was held in 1977 at the Lithuanian Art Museum, comprised of the 23 best paintings of his Tahiti period that Jonas Rimša has donated. The second, supplemented by 75 paintings from private collections, was held in 2010, and ranged over a much wider scope of the artist‘s oeuvre. The third, which took place in 2013 at the M.K. Čiurlionis National Museum in Kaunas, was the first to introduce his early creative period, and presented the American Indian traditions, culture and spirit. This exhibition, The Magic of Fire and Jungle, organized on the basis of the collection owned by the Lithuanian Expatriate Art Foundation, reveals the whole of Jonas Rimša‘s creative work that highlights the Native American spirit, so pervasive even in his Tahitian period painting.

The painter has exceptional merit for the Bolivian culture: he was awarded the highest civilian award the National Order of the Andean Condor (1950), and conferred with the titles Honorable Citizen of the Bolivian State and Honorary Professor of the University of Sucre (1974). He has left a distinctive mark in Bolivian art as a painter and art educator, while Lithuania is interested in him as in the artist who has granted exotic colors to the Lithuanian fine art. He was the first Lithuanian artist who expressed serious interest in American Indians, and discovered their true spirit.

Jonas Rimša was born on in 12 June, 1903 in a small village of Svėdasai, and grew up in the city of Kaunas. He graduated from Vienna‘s best sewing school, but then, dreaming to become a painter under protest of his father, he went to look for happiness abroad. From 1931 to 1934, he studied at Buenos Aires Academy of Arts (Academia Nacional de Bellas Artes in Buenos Aires), which then was the best throughout South America. In 1943, upon invitation from the Bolivian government, he established an art school in Sucre city, and became its head teacher. Later, he founded his own private art academy (Curso Superior de Bellas Artes), whose students became known as "Rimša‘s group." This group has grown a number of artists, of which the four brightest Jonas Rimša sent to continue their studies in Europe at his sole cost and expense.

His restless spirit of a searcher encouraged Jonas Rimša to travel and improve his skills constantly. The painter lived in Brazil, Argentina, Bolivia, the United States, and Tahiti. He knew the jungle well. He especially loved to paint in Bariloche. The artist discovered two oldest American Indian tribes – Aymara and Quechua, delving deep into their living and customs, and rejected the prevailing Eurocentric approach to the Spanish-conquered indigenous population by elevating their spirituality in his art, drawing attention to the American Indians as the custodians and successors of deep cultural traditions.

The desire to know the ancient primitive cultures led Jonas Rimša to the distant Tahiti, where the famous French painter Paul Gauguin searched for his creative inspiration. The Tahitian life, as exposed to civilization, had significantly changed since Paul Gauguin times, still the newly-discovered another world inspired the painter for extremely colorful painting. Paul Gauguin admired the earth drenched by the heat of the sun, but Jonas Rimša was fascinated by the mysterious light and color of the jungle shade. In the life and movements of the Tahitian people, he felt a distinctive musical rhythm, and discovered their unique love dance Tamure that remained banned in the times of Paul Gauguin.

This exhibition will introduce the audience with the best works by Jonas Rimša that have been selected from the huge (over 100 of his paintings) art collection of the Lithuanian Expatriate Art Foundation, fully reflecting the Bolivian and Indian periods of his oeuvre which made the artist famous in other countries, but is not well known in Lithuania. In order to present it in the general context of his creative work, the exposition has been topped with three paintings from the M.K. Čiurlionis National Museum, five paintings from the Lithuanian Art Museum, and eight paintings from private collections: six from Rolandas Valiūnas‘ collection and two from that of Nerijus Dagilis.

According to the painter‘s artistic interests, his works (65) have been divided into two main groups: the first reflects the specificity of the American Indian life, as well as the interchange between their archaic local cultural traditions and the Spanish-brought European Romanesque culture, while the second displays the spirit of the jungle – the descendants of Indians and Tahitians – that Jonas Rimša understood so distinctly.

We hope that the exhibition will help the audience to get to know Jonas Rimša‘s creative world and appreciate the whole of his painting and its artistic value.

The exhibition will run from 12th February untill 12th April 2015

Moments from the opening of the exhibition "Jonas Rimša (1903–1978). The Magic of Fire and Jungle" Catalog “Inversion. Evil Goods”